A video posted to Reddit this week shows several motorists rushing to save a driver from a burning GMC Yukon after it crashed heavily on a highway near Houston, Texas.

The four-minute dash cam clip was posted to the subreddit /r/IdiotsInCars this week with the title “Witnessed a car crash yesterday and other drivers rushed to help remove the driver and passenger from the burning car. Everyone survived the crash.” The clip shows a GMT800-generation GMC Yukon lose control before crashing into the side of a flatbed trailer that was carrying a large number of wood pallets. The heavily damaged Yukon then slides back across the road before coming to rest in the middle lane and catching fire. 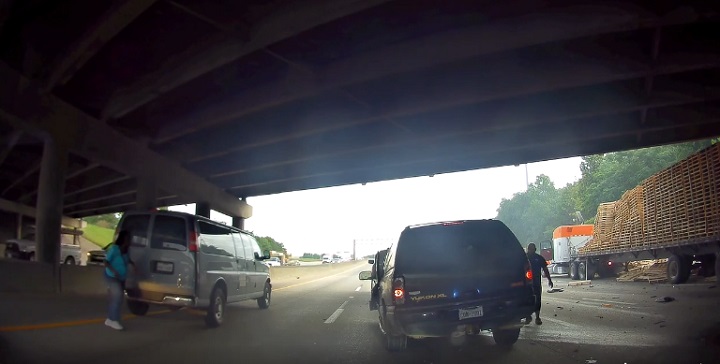 From here, a number of nearby motorists spring into action, pulling on the bent frame of the GMC Yukon’s driver side door to extricate the occupants. A quick-thinking citizen then rushes back to his car to grab a small fire extinguisher and put out the blaze that started around the SUV’s engine bay. This unidentified man really saved the day here, helping to extinguish the flames before they could fully engulf the GMC Yukon and potentially cause further injury to the crash victims and the citizens trying to help them.

This crash was entirely the fault of the GMC Yukon driver, so hopefully they’ve learned an important lesson about speeding and passing in the right-hand travelling lanes. Driving in such a reckless fashion is never a good idea, but it’s an especially poor decision when you’re piloting a big, heavy and ageing GMC Yukon that is likely not in the best state of repair. Given the speed the Yukon was travelling at the time of the impact, the driver and passenger are extremely lucky to be alive.

Check out the video clip embedded below.