Even with the seemingly never-ending list of modern conveniences and tech advances, there are still quite a few annoying aspects of driving left unconquered. That includes parking, which can get pretty irritating, especially for those living in an urban environment. However, despite the annoyance, there are better ways to deal with it than nearly running someone over like the driver in the Chevy Malibu featured in the following brief video.

Coming to us from social media news website reddit, this video is brief, clocking in at just 22 seconds. The video opens in a parking lot, where a Chevy Malibu is parked in the upper left-hand corner of the frame. A parking attendant stoops down behind the four-door sedan, and appears to be snapping a photo of the vehicle’s license plate.

This is where things start to get a little crazy. The driver in the Chevy Malibu suddenly reverses, forcing the parking attendant to move over. Another person then walks up and enters the vehicle’s passenger side.

Before the passenger door is even closed, the Chevy Malibu driver starts to drive away. However, the parking attendant is standing right next to the sedan, obviously annoyed by the driver’s actions. Unfortunately, the driver then proceeds to run into the attendant, causing him or her to stagger backwards. It even looks like the driver may have run over the attendant’s foot in the getaway.

Details on exactly what happened are a bit vague. According to the vehicle timestamp, the incident took place on May 13th around 6:45 PM, and, per the post title, the whole incident was over a $1 parking fee. 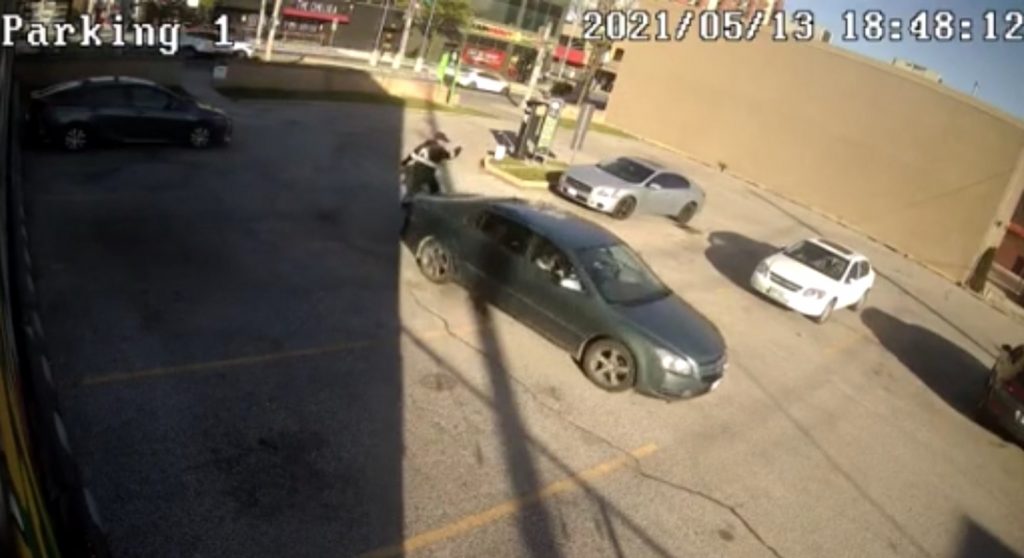 The validity of that last part is questionable (seriously, where can you find $1 parking these days?), but either way, this situation could have gone south pretty quick. Some folks are even criticizing the parking attendant for “risking their life” over what’s presumed to be a small skipped parking fee.

Watch the video and decide for yourself: