Earlier this month, we presented a live photo gallery of a 2021 Cadillac CT5-V in Rift Metallic paintwork, then another of the same vehicle’s interior at night. In the latest episode of this series, we continue the night-time theme, but return to the outside for a look at the performance-oriented luxury sedan’s exterior lighting. 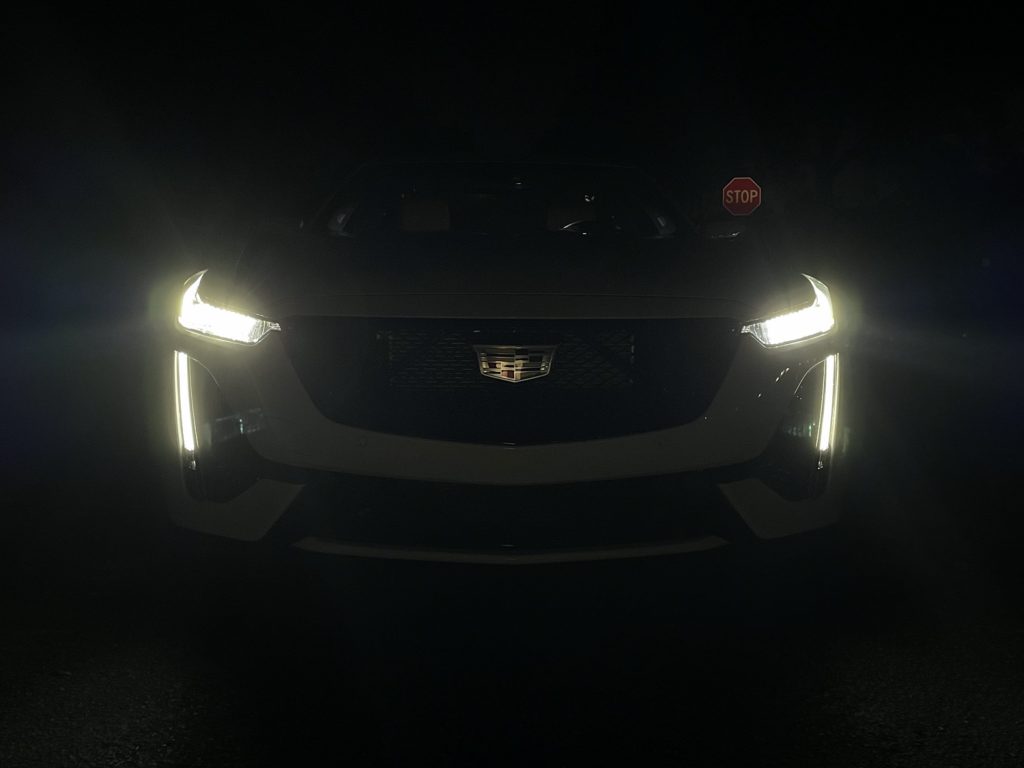 One immediately obvious feature is the inclusion of horizontal signature lighting elements in addition to the vertical elements. A few years ago (and as far recently as the ATS and CTS), the Cadillac Art & Science design language emphasized vertical lighting. However, a new direction was introduced on the Cadillac Escala concept, which was shown in 2016. 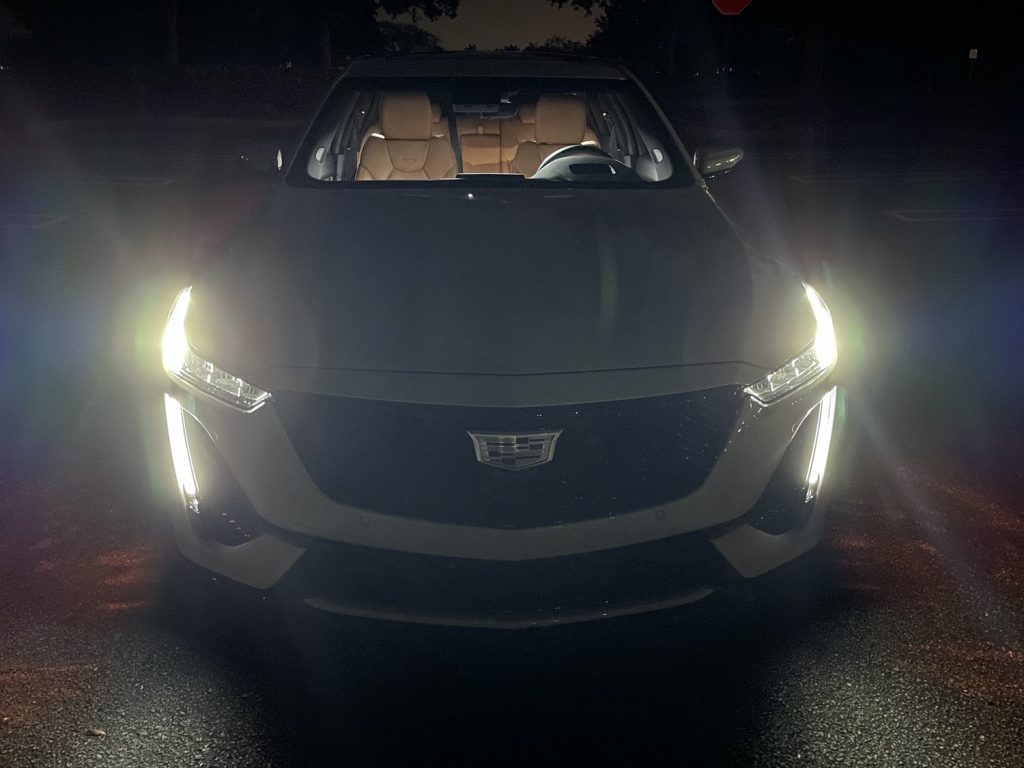 The Escala’s horizontal lighting elements then began to appear on production vehicles. Along with the Cadillac CT5-V – and indeed the Cadillac CT5 range in general, they can now be found on the Cadillac CT4 luxury sedan, the Cadillac XT6 crossover, the fifth-generation Cadillac Escalade full-size luxury SUV, and the refreshed-for-2019 Cadillac CT6. The only models missing from the list are the XT4 and XT5. 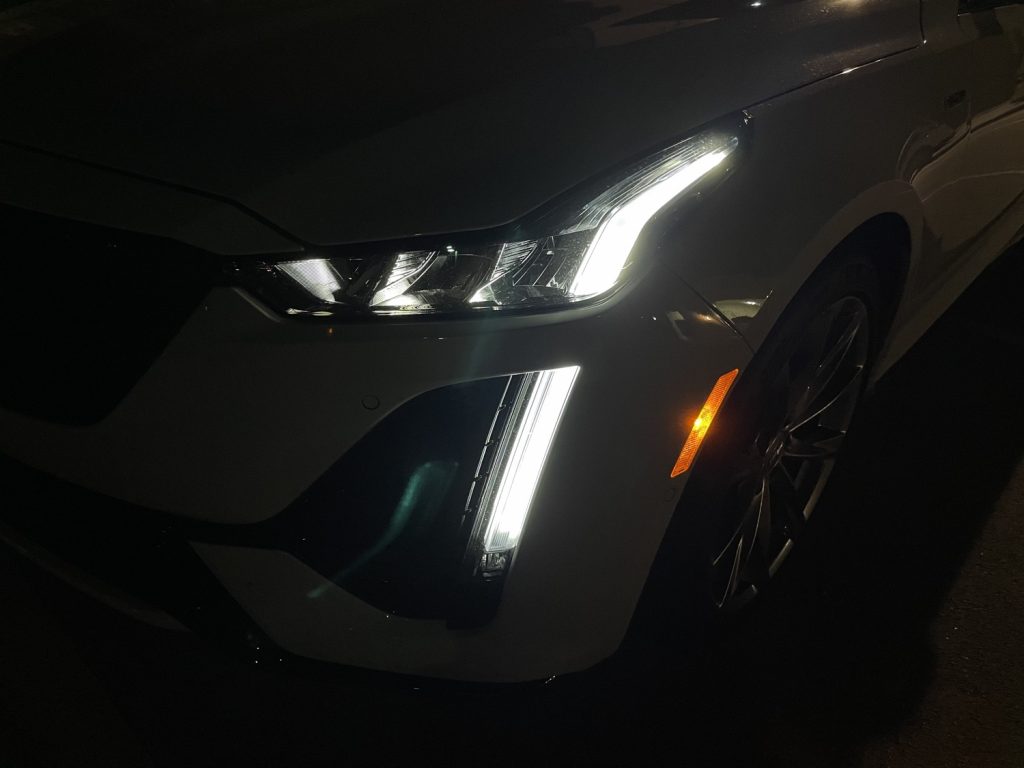 However, vertical lighting is still very much apparent on the Cadillac CT5-V, notably on the signature vertical lights next to the front side air intakes. This shape is echoed by the amber marker lamps just ahead of the front wheels. 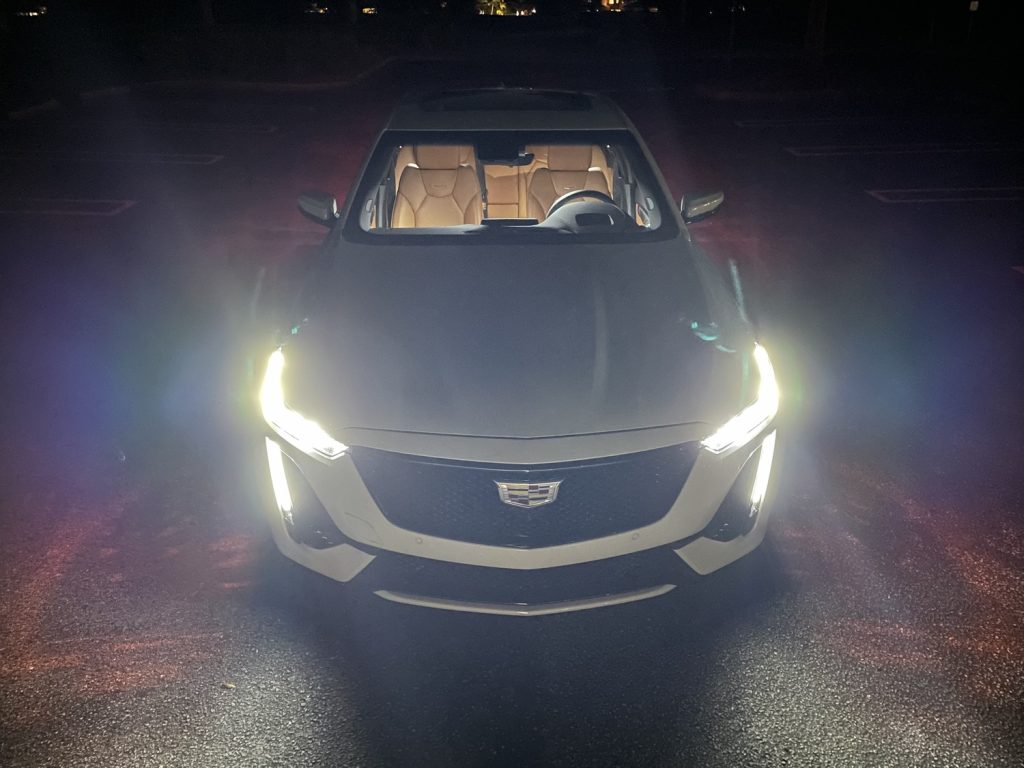 The Cadillac emblem on the front grille incorporates the traditional red, yellow and blue quadrilaterals. A monochrome emblem is offered as an option on other models in the GM luxury brand’s line-up, but not on the Cadillac CT5 range just yet. 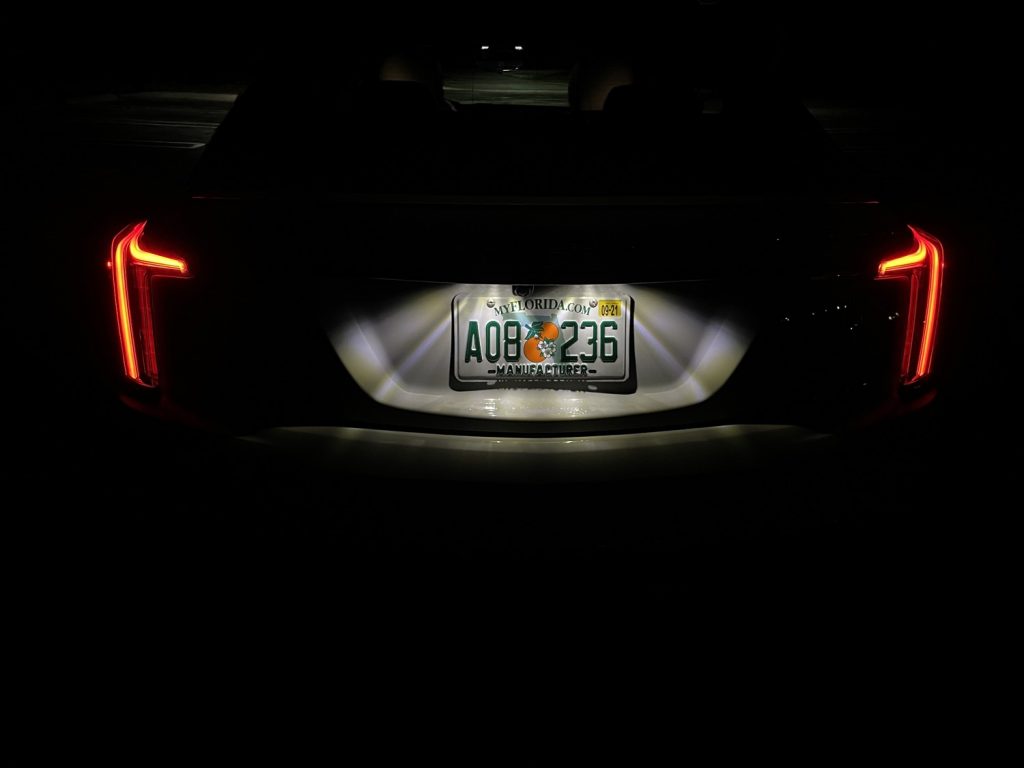 The rear lights also have a combination of horizontal and vertical elements. The horizontal element is the novelty, since the last-gen Cadillac design philosophy called for strictly vertical tail lights as seen on the XT6, ATS, CTS, XT5 and Escalade. 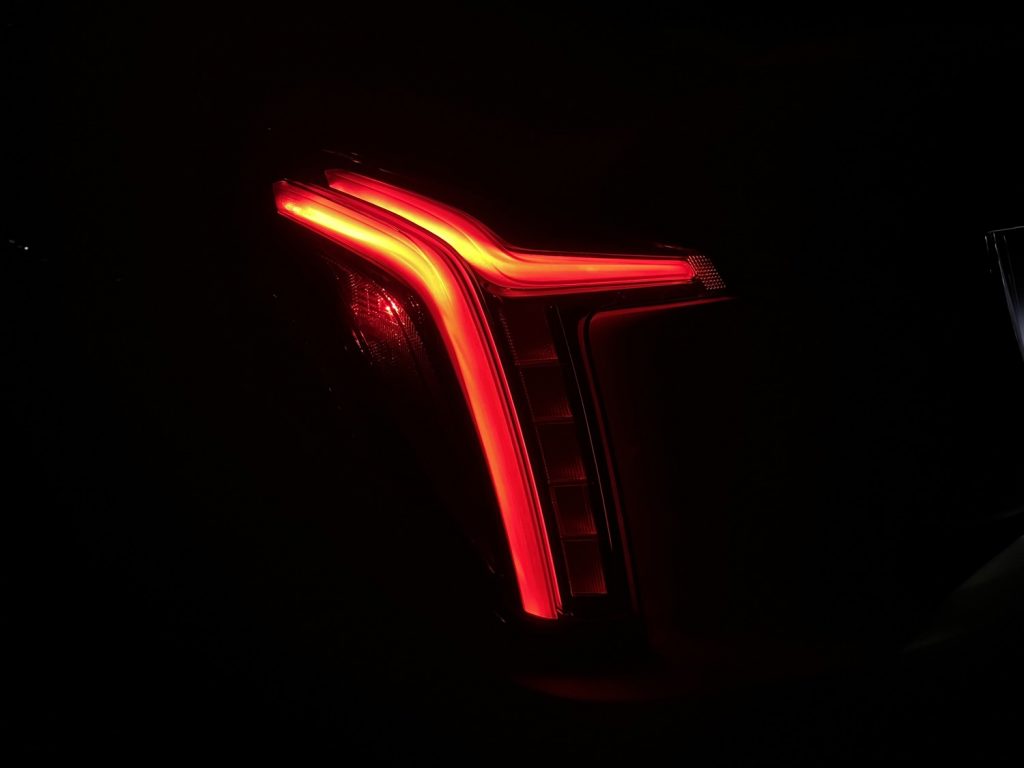 The outer segments of the rear lights are almost entirely vertical. The inner ones start out that way but then swing toward the center of the vehicle. 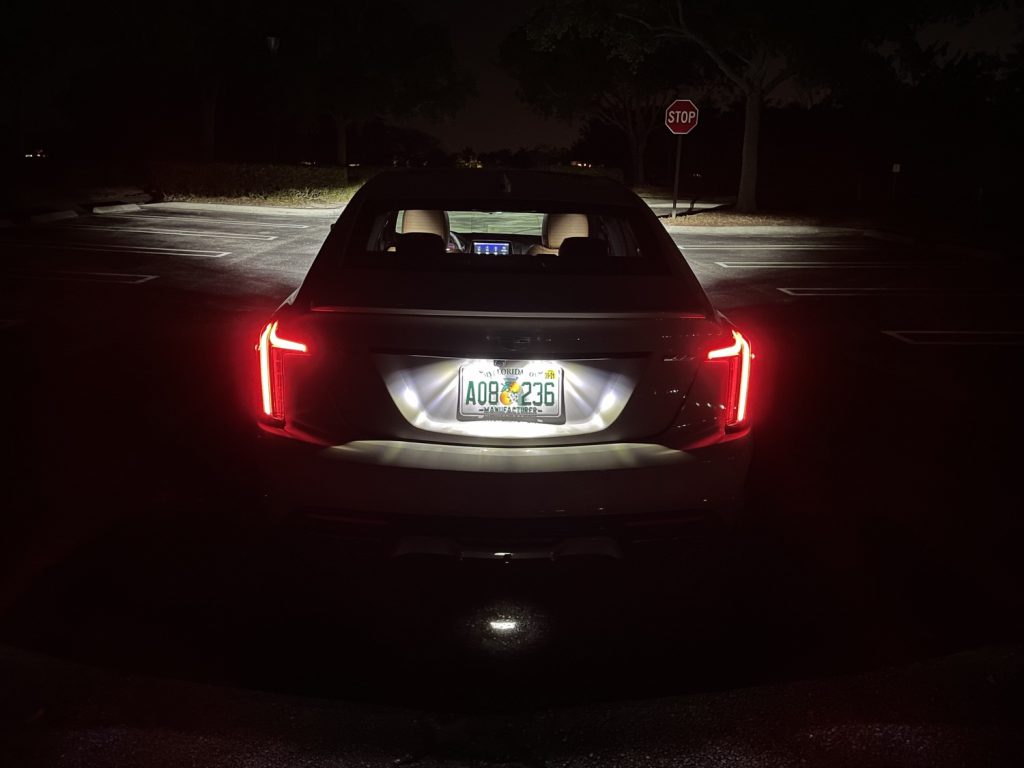 Seen together, and from above the level of the trunk, the overall effect of the rear lights is to form two halves of a slightly deformed H shape, with the horizontal parts much further above the center than in the letter. 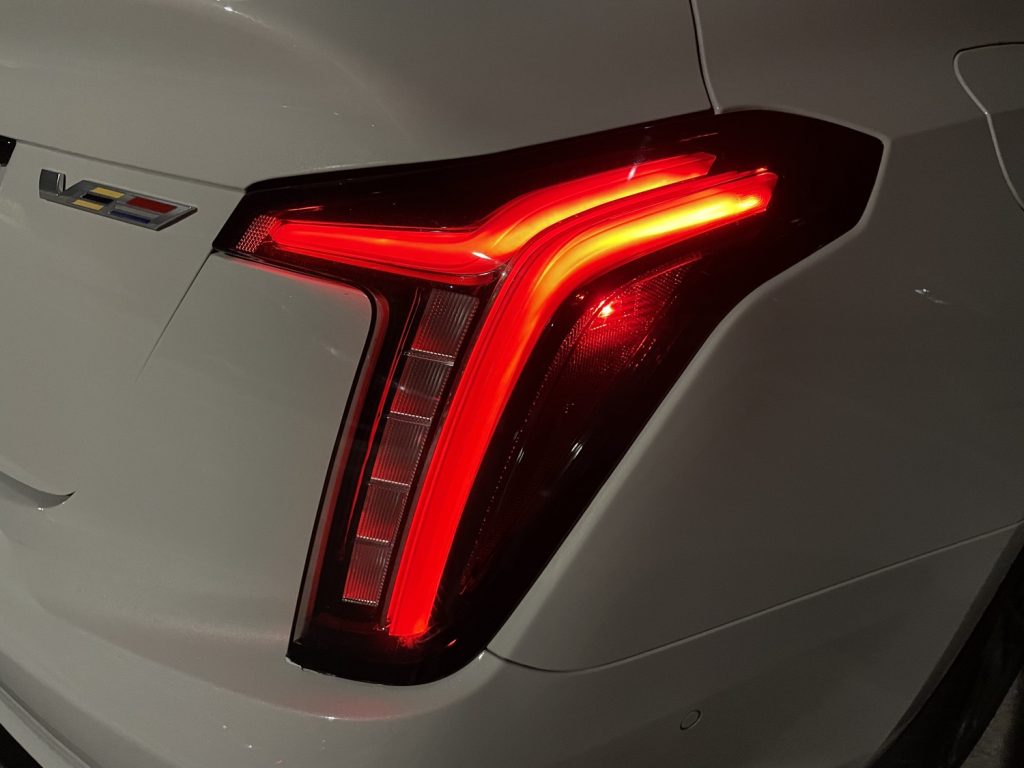 The V Series logo on the left of the decklid has the customary right-biased parallelogram elements, which give an appropriate impression of speed. However, as with the Cadillac emblem on the front grille, the traditional red, yellow and blue coloring is retained.

The Cadillac CT5-V is built at the GM Lansing Grand River assembly plant in Michigan. It is powered by the twin-turbo 3.0L V6 LGY gasoline engine, which produces 360 horsepower and 405 pound-feet of torque. Power is sent to the rear wheels through GM’s 10-speed automatic transmission. All-wheel-drive is optional.