Another week, another drag racing video from the muscle car-obsessed guys over at YouTube channel Cars and Zebras. In this clip, one of the most famous and celebrated General Motors muscle cars, a 1970 Buick GSX Stage 1, lines up against one of the wilder creations to come out of Dearborn in the 1960s, the 1969 Mercury Cougar 428 Cobra Jet.

Before you place your proverbial bets, let’s go over what each of our challengers has hidden under the hood. The 1970 Buick GSX Stage 1 left the factory with a huge 455 cubic-inch V8 engine, which is good for an estimated 360 horsepower at 4,600 RPM and 510 pound-feet of torque at 2,800 RPM. The model in this video also features a three-speed TH400 automatic transmission, which sends power to the rear wheels through a set of factory 3.64 rear gears. Cars and Zebras says this car tips the scales at 3,998 pounds with the driver included, so while the Buick 455 V8 has plenty of power and torque on tap, it has a considerable amount of weight to lug around as well. 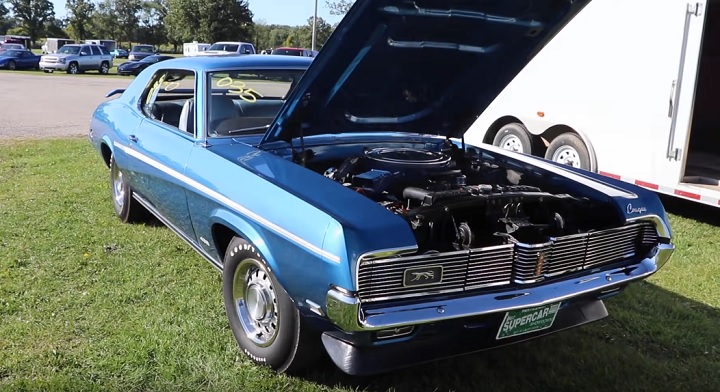 Now let’s move over to the competitor’s corner and have a closer look at the 1969 Mercury Cougar 428 Cobra Jet. As the name suggests, this American pony car came equipped with a 428 cubic-inch V8 engine producing a stout 335 horsepower and 440 pound-feet of torque. This model also features the Select-Shift three-speed automatic transmission and 3.50 rear gears. It comes in at 3,820 pounds including the driver, undercutting the Buick GSX by nearly 200 pounds. The Mercury may be lighter than the Buick, but it’s also less powerful, so it seems as though we have a pretty close race on our hands here.

There’s not much between these two on paper, so it’s hard to predict a winner. Scroll down and press play to watch the video and find out which of these Detroit performance specials comes out on top.