Last month, YouTube’s Emilia Hartford met up with her fellow video creators over at Hoonigan for an episode of their This vs. That drag racing web series. That video saw Hartford and her twin-turbo C8 Corvette take on one of the fastest-accelerating cars on sale today, the Porsche Taycan Turbo, winning the drag race by a hair in a tight photo finish. 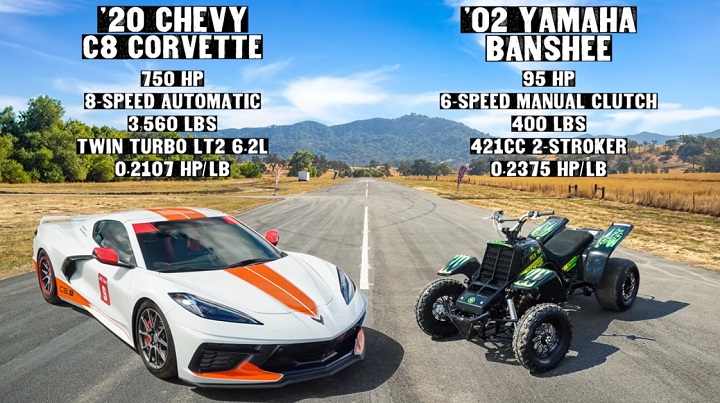 Now, Hartford and her boosted Corvette are back for another episode of This vs. That – but this time, her challenger is a bit, uh, different. For this episode, the Hoonigan crew called up their friend Jonathan, who works on two-stroke ATVs in his spare time. Jonathan is the proud owner of a tuned Yamaha Banshee ATV, which has a built 421cc stroker motor making about 95 horsepower. With him riding it, his racing ATV tips the scales at about 600 pounds – giving it a slightly better power-to-weight ratio than Emilia’s Vette. 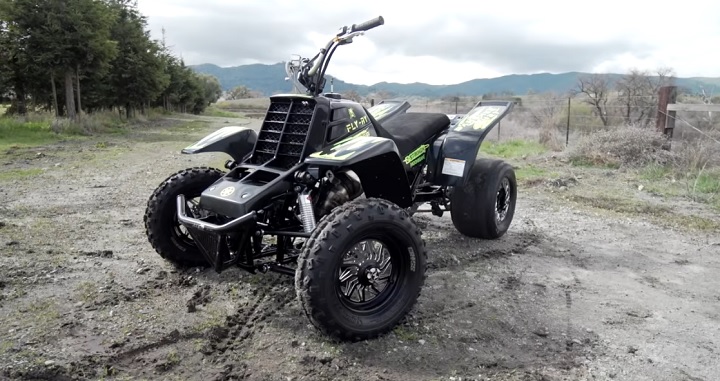 Speaking of, Hartford’s Corvette has a 6.2L LT2 V8 built by Texas Speed with two ball bearing turbochargers affixed to it. It makes about 750 horsepower, which is routed to a pair of Mickey Thompson rear drag tires through a quick-shifting eight-speed dual-clutch transmission. Hartford’s Vette obviously has more power than Jonathan’s two-stroke Banshee, then, but it tips the scales at a significant 3,560 lbs.

Many readers are probably thinking the C8 Corvette will smoke this aging Yamaha ATV, but they’d be wrong. We don’t want to give the results of the race away early, but let’s just say that this drag race is much closer than we initially thought it would be. Turns out two-stroke ATVs are pretty fast!