If you are of a certain age, it is difficult to believe trucks like this 1987 K10 Chevy Silverado pickup are considered classics. It doesn’t seem like it has been all that long since these were new. Then you think about when the last time was you saw a really clean one, and reality sets in. These have become rare. Most were bought new to be workhorses, and were treated accordingly. They were beat up, worked hard and put away wet. They lived hard lives, were used up and discarded. To find one in the condition of our featured Chevy K10 is indeed a rare occurrence. 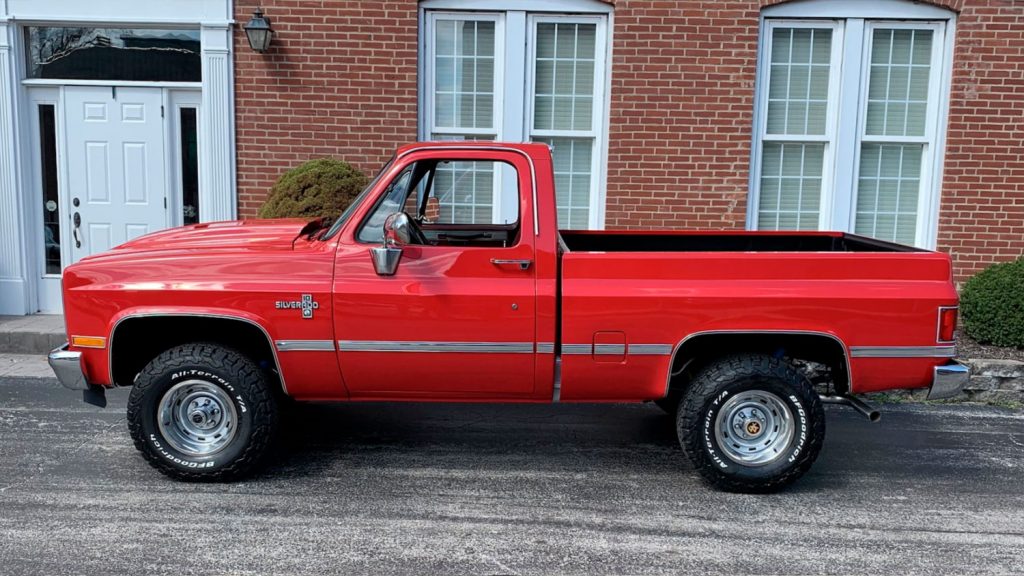 This bright red Chevy K10 Silverado pickup is in nearly new condition. The exterior of this short bed 4×4 is resplendent in bright red. The chrome bumpers present as new, and the stainless trim appears to be well polished. It hasn’t been lifted or had giant wheels and tires installed. The Chevy K10 retains most of its original look, save for the power bulge on the hood. The beltline molding that so often peels on this vintage Silverado is perfectly intact. The bed has been lined with a black spray-in liner, and looks new. 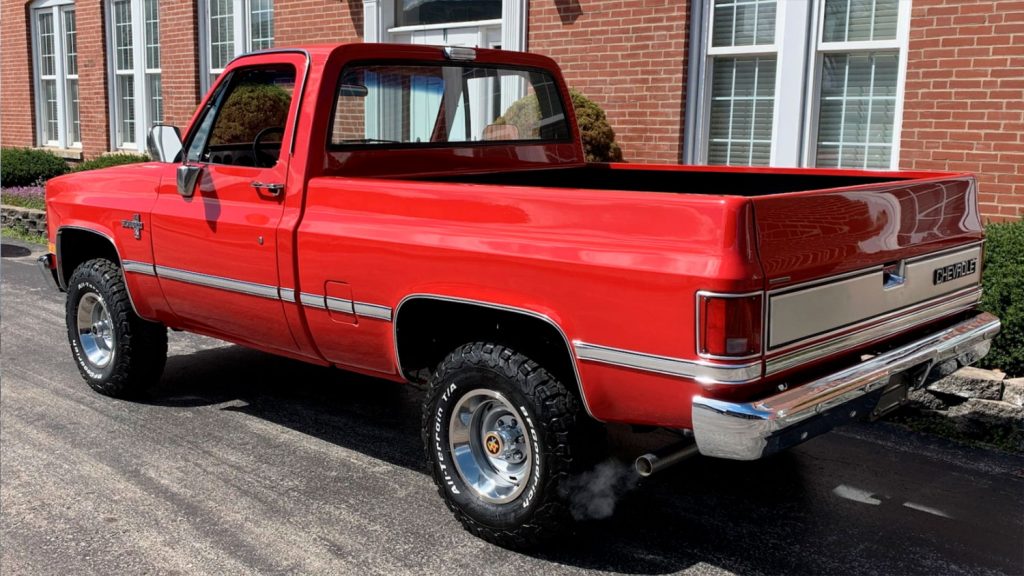 Beneath the hood of the Chevy K10, everything appears showroom fresh. Aside from a bit of light dust, everything looks about like it would have when the truck was delivered new. All the original componentry of the 350 cubic-inch, fuel-injected Small Block V8 is correct and in place. An automatic transmission backs the Small Block. It’s a bit of a time capsule. 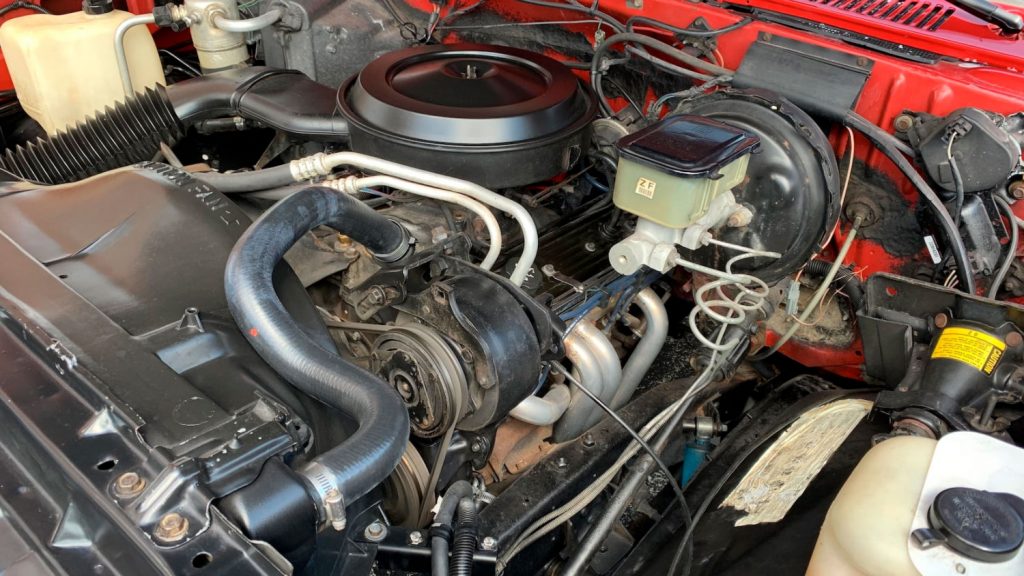 Inside the Chevy K10’s cab, the originality theme continues. The bright red cloth bench shows only the slightest wrinkling on the bottom cushion. The steering wheel and pedals show no undue wear. The odometer is not quite visible, but one could be forgiven for assuming it shows minimal mileage. The dash is free from cracks (something this era of GM trucks was notorious for), the windshield looks to be crystal clear, the carpets are still bright, and there are no scuffs on the lower painted portion of the dash. This Chevy K10 came nicely equipped with power steering, power brakes, power windows, power door locks, A/C, and a tilt steering column. Not too shabby. 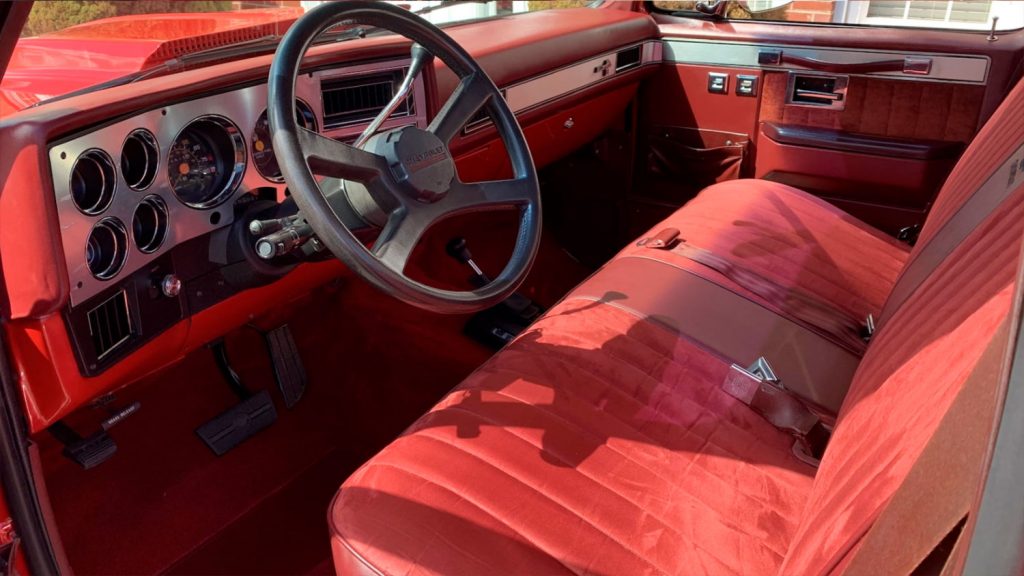 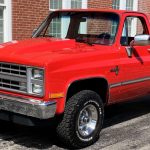 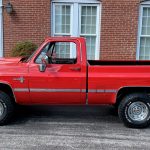 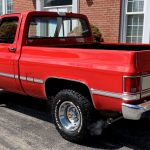 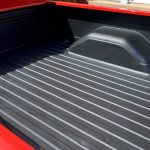 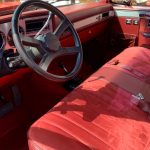 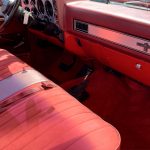 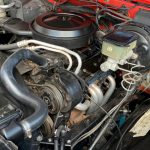 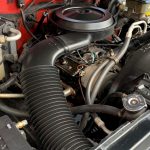