GM Financial ranked in the middle of the pack in the 2021 J.D. Power End of Lease Satisfaction Study.

The J.D. Power End of Lease Satisfaction Study aims to identify which automaker financial institutions have “lease-end practices and timely marketing opportunities that optimize lease retention for the same brand and at the same dealer.” This year’s edition of the study was based on the survey responses from 2,761 mass-market and premium vehicle lease customers who were within six months of a vehicle lease-end and was fielded from November 2020 through January 2021. Each brand was given a score out of a 1,000 point scale based on the survey responses, with a higher score reflecting better lease-end practices for customer retention. 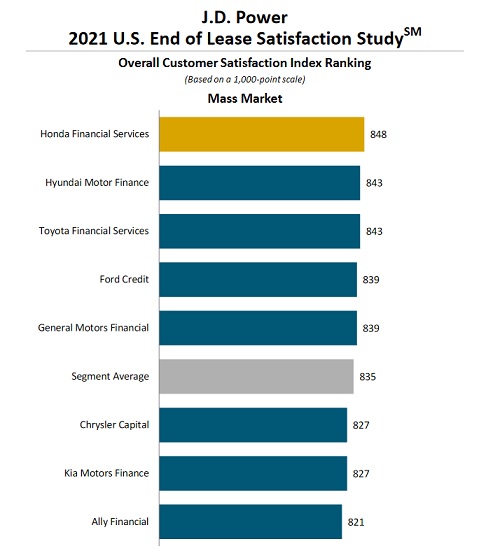 Patrick Roosenberg, director of automotive finance intelligence at J.D. Power, says retaining customers at the end of their lease period is all about getting dealers to deliver the right messaging to them – such as new lease incentives, deals or product launches, at exactly the right time.

“There is a formula for optimizing new-vehicle lease recapture and conquest strategies,” Roosenberg said. “With such a high percentage of returning customers leasing again, the key to retaining those customers along with first-time lease customers is delivering the right proactive messaging at the right time via the right channel. The more lenders, OEMs and dealers can coordinate their communications to connect with customers at the right moments in their leasing journey, the more likely they will be to develop strong, long-term relationships.”

J.D. Power also said that returning and first-time lessees start considering a new vehicle as early as 12 months prior to the end of their existing contract, so they can be “heavily influenced at this stage by proactive communication from lenders, dealers and manufacturers.”