The Buick Enclave crossovers sold and China and in North America have the same name, and are mechanically related, but they are not the same vehicle. Similarly, their styling cues differ considerably, even though they share a family resemblance. Today’s GM Authority side-by-side comparison – with the upcoming American 2022 Buick Enclave on the left and the Chinese Buick Enclave on the right in every case – explains all. 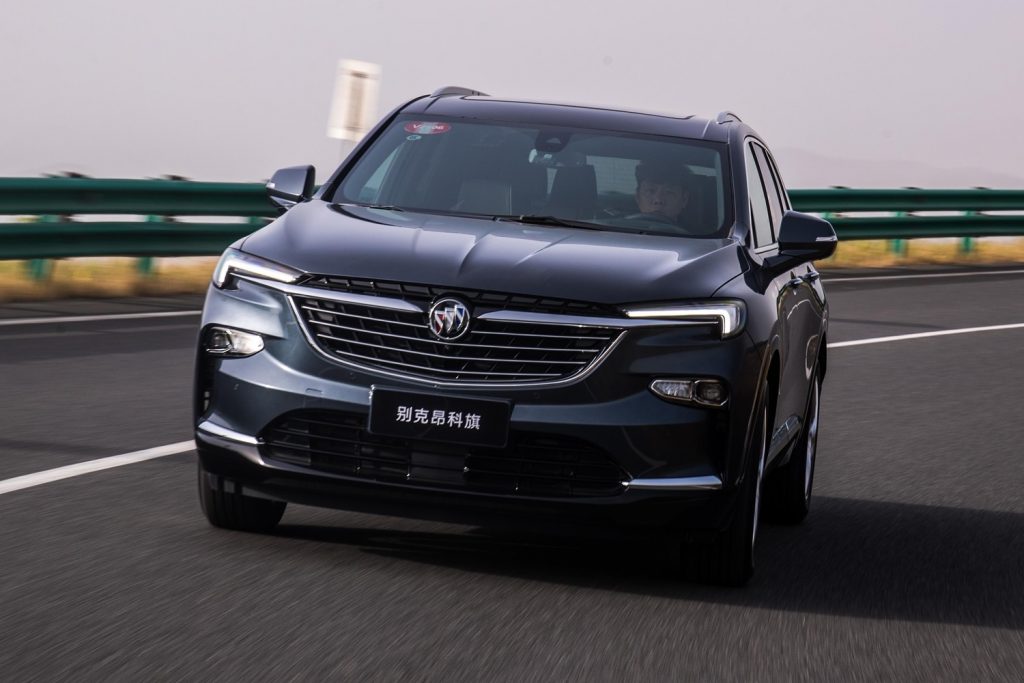 The front grilles of the two vehicles are similar in shape, though the American-market Enclave in this photo has a diamond mesh grille because it’s the range-topping Avenir, while the grille on the Chinese model (not an Avenir) has five chrome horizontal elements. A redesign of the front fascia for the 2022 Buick Enclave means that it now follows the Chinese design of having the primary headlights now reside below a set of thin DRLs.

Additionally, a chrome element slashes past the perimeter of the grille on both sides and pierces into the Daytime Running Lights / accent lights at the top of the fascia. This was not possible on the American 2021 Buick Enclave, because the lights were much deeper. Instead, the horizontal line ended before it reached the sides of the grille. 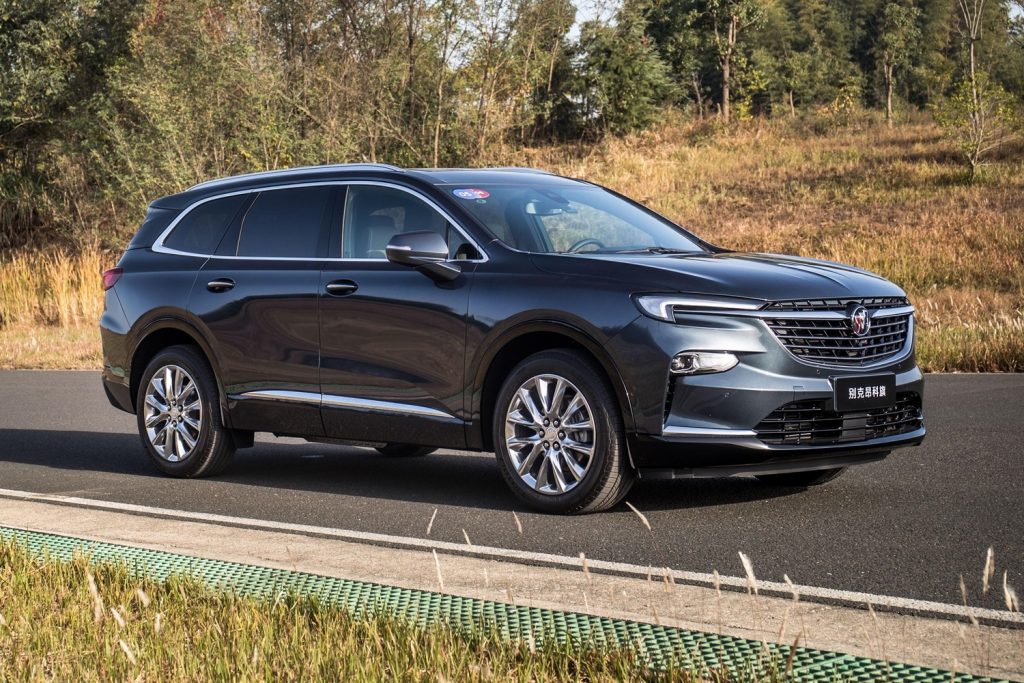 Relative to the American Enclave, the primary headlights on the Chinese vehicle are mounted considerably higher on the fascia, the lower air intake is wider and the shape of the bumper is significantly different. 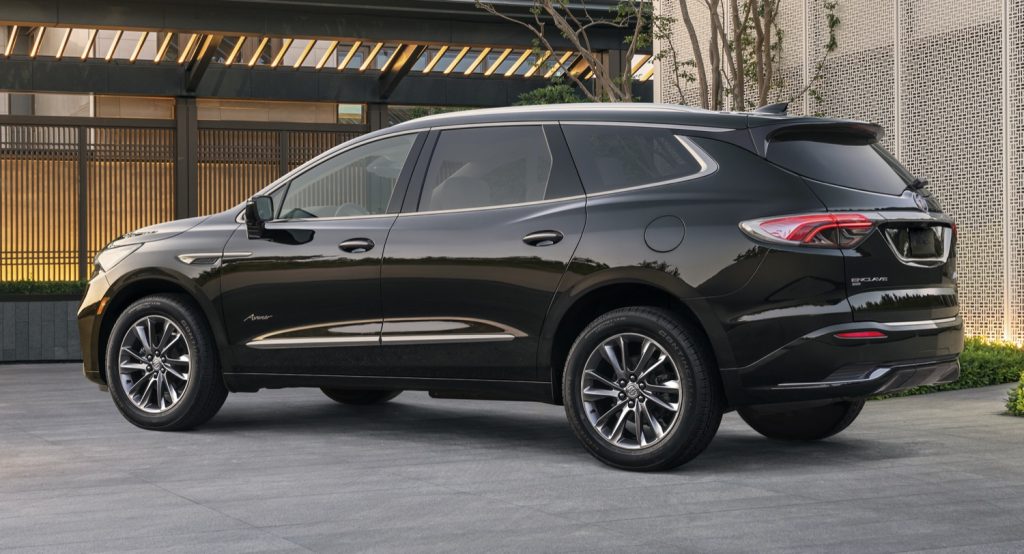 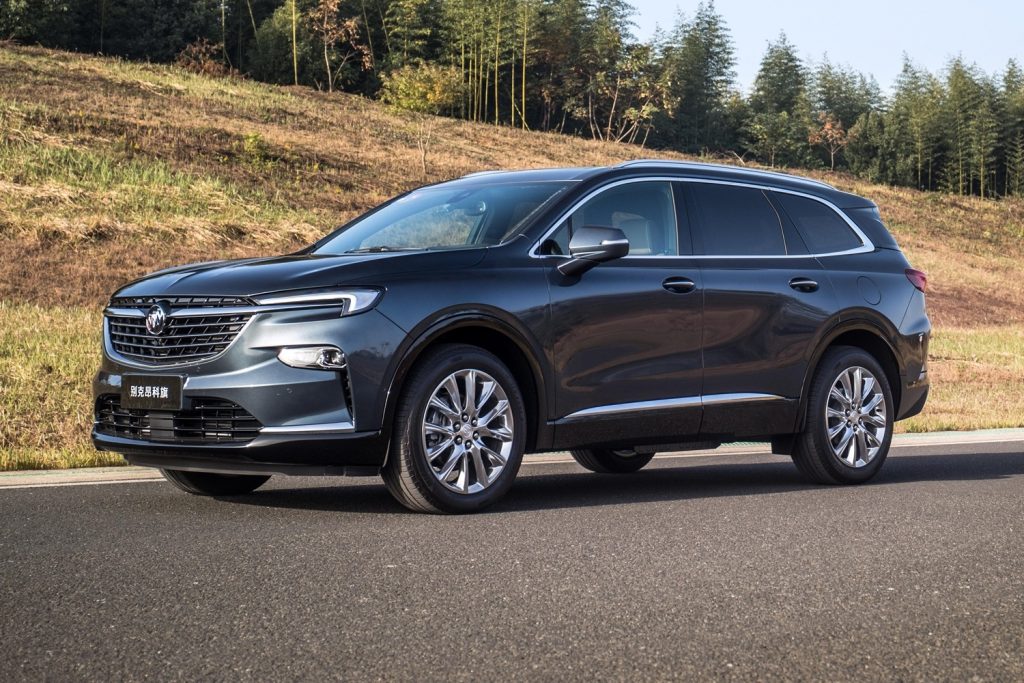 The relationship between the two crossovers seems closer when they are viewed from the side, but there are differences here too. Notably, the upper crease line on the American Enclave rises slightly over the front wheels, falls gently as it crosses the B-pillar and then rises sharply at the C-pillar. The equivalent line on the Chinese Buick runs almost straight along the side of the vehicle. 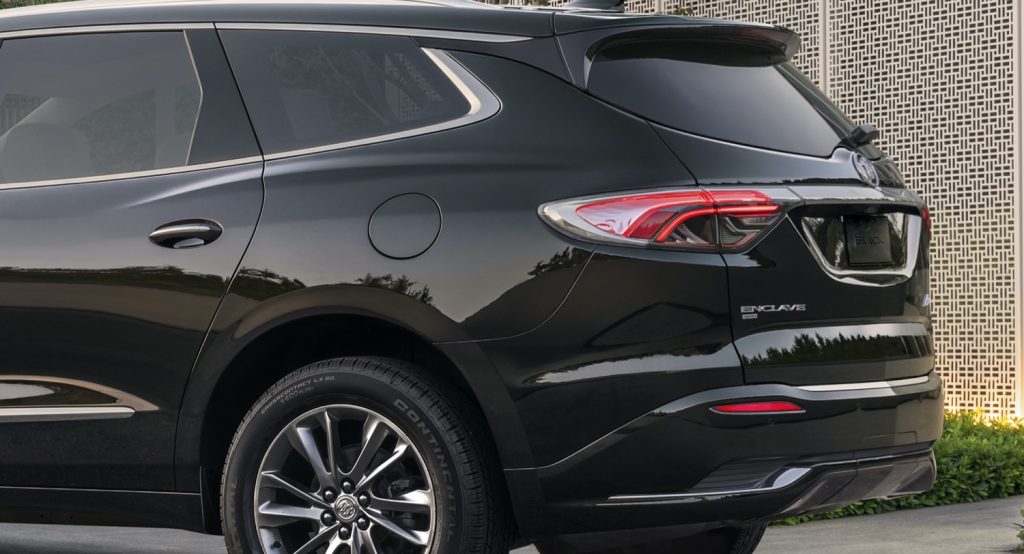 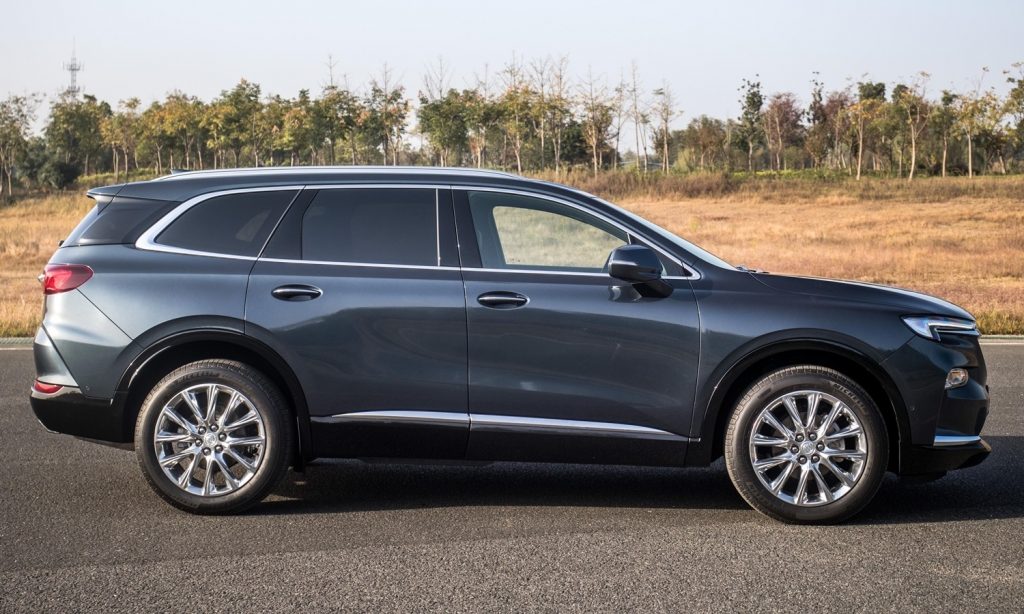 Perhaps the most dramatic difference is the treatment around the D-pillar. The American Enclave has a window above the cargo area with a sharp upward tilt to its lower edge. On the Chinese model, the rear side window has a more level lower edge (providing superior visibility), while glass wraps round from the liftgate to the pillar. 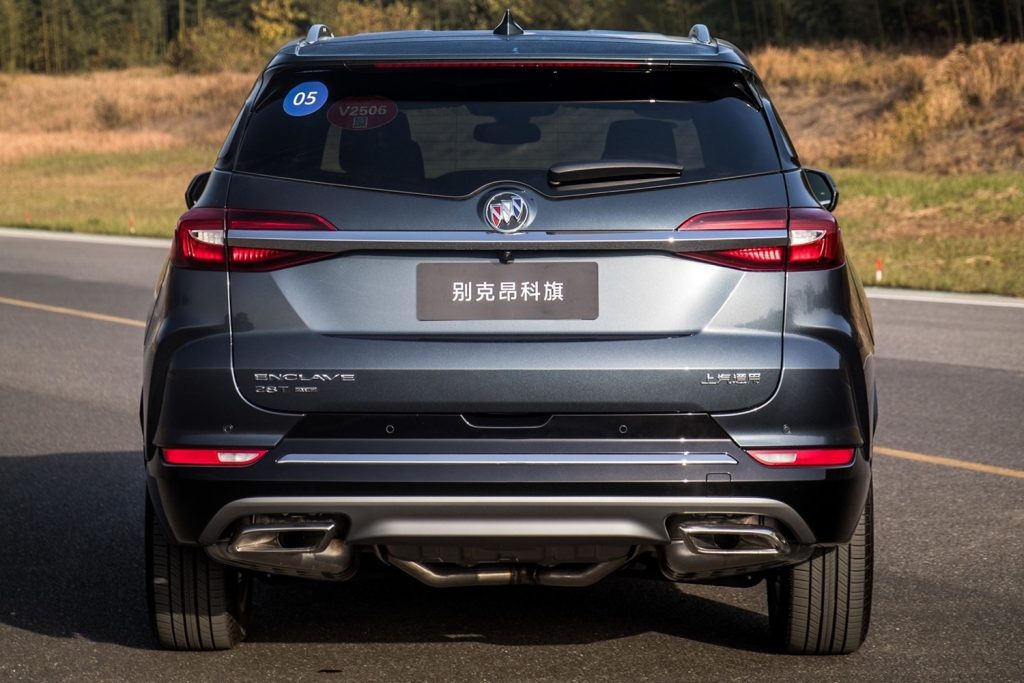 At the rear, the American vehicle has a large chrome horizontal element joining the rear lights. The line starts in the center of the lights but then rises up, “pushed” there, in a sense, by the rising diagonal line marking the inner lower extreme of the lights themselves. On the Chinese model, the lights are more shallow, and the line between them is essentially straight for the full width of the liftgate. The lower lights are significantly higher on the American Enclave, and the bumpers once more have very different designs, like at the front. 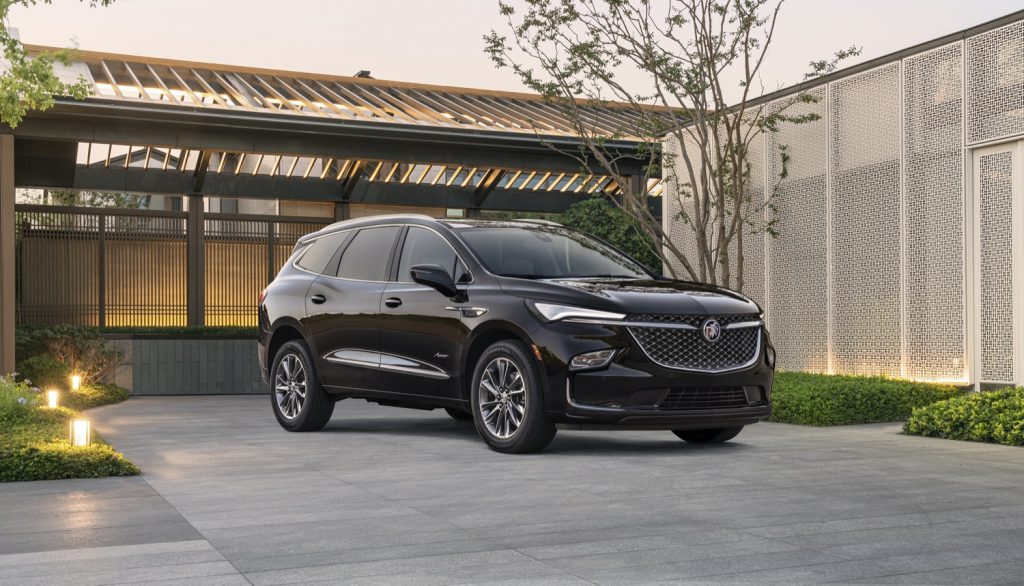 The American Enclave is built on the long-wheelbase of the GM C1 platform, which it shares with the Chevy Traverse. Both of these vehicles are built at the GM Lansing Delta Township plant in Michigan. The only available engine is the naturally aspirated 3.6L LFY V6, which produces 310 horsepower and 266 pound-feet of torque. GM’s nine-speed auto does the shifting. Front-wheel-drive is standard, while all-wheel-drive is available. 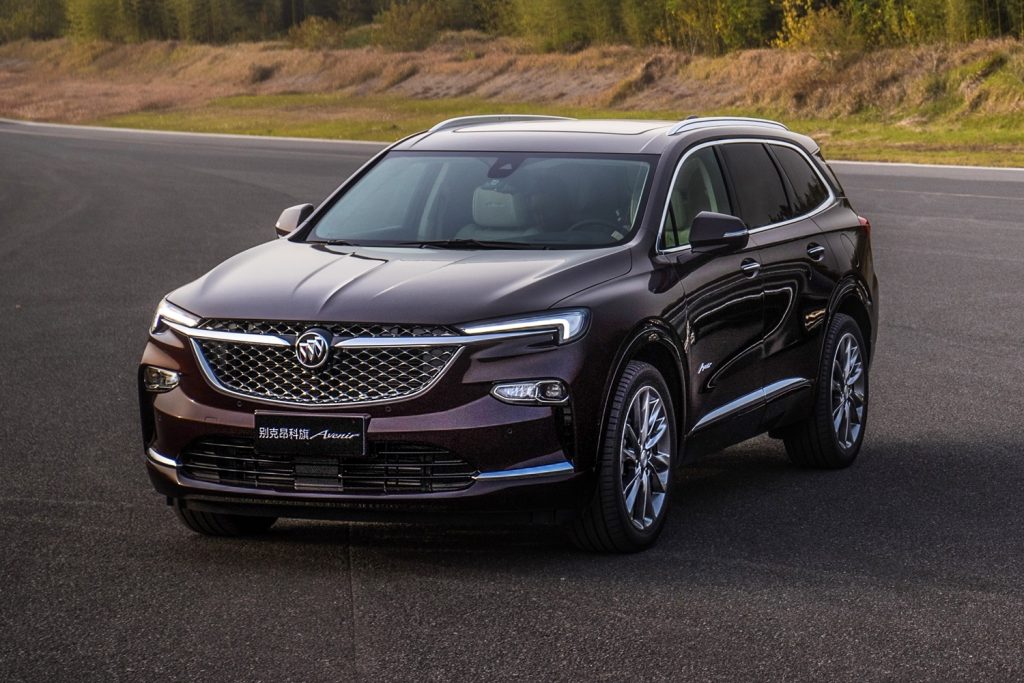 The Chinese model also rides on the C1 platform, but this time on its regular-wheelbase, wide-track, long-rear-end form. It is therefore similar to the Cadillac XT6 and the Chinese-market three-row Chevy Blazer. All three are built at the Jinqiao Cadillac plant in Shanghai. For China, the Enclave is powered by the turbocharged 2.0L I4 LSY gasoline engine, which is rated at 233 horsepower and 258 pound-feet of torque. Like the LFY, it is paired with GM’s nine-speed automatic transmission, with FWD standard and AWD optional.

Be sure to subscribe to GM Authority for more Buick Enclave news, Buick news and 24/7 GM news coverage.