The Chevrolet Silverado 1500 full-size pickup is among the most leased vehicles in the United States, according to data compiled by multinational consumer credit reporting company Experian.

According to the recent Experian report, the Chevy Silverado 1500 accounted for 2.13 percent of all vehicles leased in the U.S. during the fourth quarter of the 2020 calendar year, making it the fourth most commonly leased vehicle on sale today. This bodes well for the Silverado in the hotly contested full-size pickup truck segment, with leases outpacing that of rivals like the Ford F-150, Ram 1500 and Toyota Tundra. The F-150 was the next most commonly leased full-size pickup at 1.64 percent. 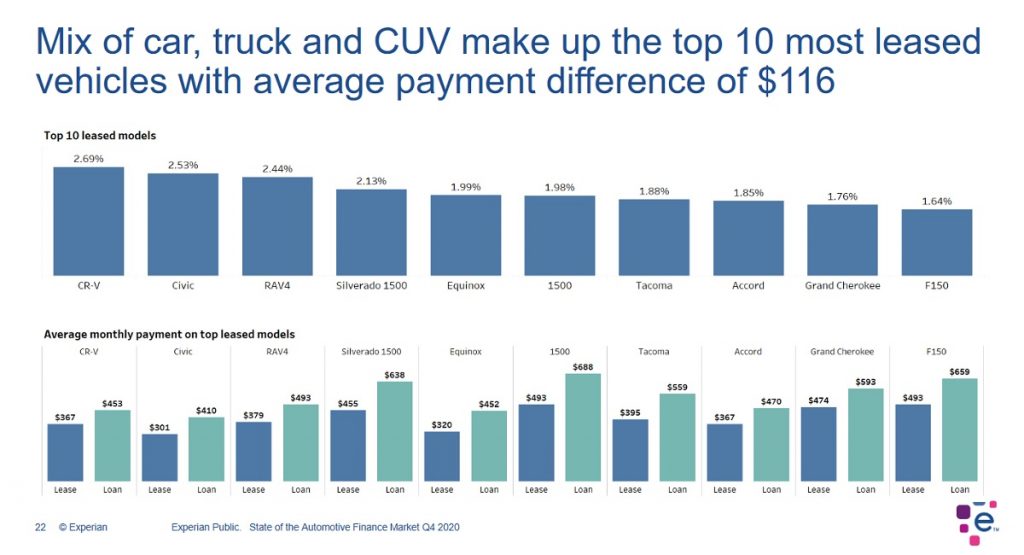 The Silverado narrowly beat out another GM product with regard to consumer leases, the Chevy Equinox, which accounted for 1.99 percent of all vehicles leased in Q4 2020, putting in fifth overall.

The most frequently leased vehicle on the market in Q4 2020 was the Honda CR-V, which accounted for 2.69 percent of leases. The Honda Civic was second at 2.53 percent, followed by the RAV4 at 2.44 percent.

It appears Chevy customers like to lease, based on this Experian report. Chevy was the third most leased car brand in the U.S. in Q4 2020, accounting for 9.21 percent of all vehicle leases. First was Honda with 11.6 percent, followed by Toyota with 11.16 percent. Interestingly, fellow GM brands GMC and Cadillac were among the least frequently leased brands at 2.38 percent and 1.76 percent, respectively.