A YouTube channel called 3DBotMaker has generated a solid following of nearly 500,000 subscribers by producing videos of diecast car races on custom Hot Wheels-style tracks and narrating the races as if they were real-life motorsport events. It might sound a bit gimmicky, but these videos are surprisingly entertaining and we think our readers will be particularly intrigued by the recent Chevy diecast race it posted to the channel.

These races are held on a custom downhill track that starts with two separate grooves for the cars to race in before splitting off into a single groove track toward the bottom of the hill. The diecast cars can’t pass when in the split portion of the track, but overtakes are possible on the banked turns and in the single groove track at the end of the circuit. The car that navigates the banked turns the best usually wins, while the losing cars typically lose traction, spin out or crash in the corners. The channel uses 1:64 scale models only, which is the standard size for your typical Hot Wheels diecast.

The Chevy diecast race posted by 3DBotMaker features a 1970 Chevrolet Chevelle, 1980 Corvette Stingray and two different 1969 Chevrolet Chevelles. The races pay out five points for first, three points for second, two points for third and zero points for fourth. Each event contains five separate heat races, with the final race paying out double points to the winner. The point totals are then tallied up to determine the standings for the entire “King of the Mountain” tournament that the channel is based on. 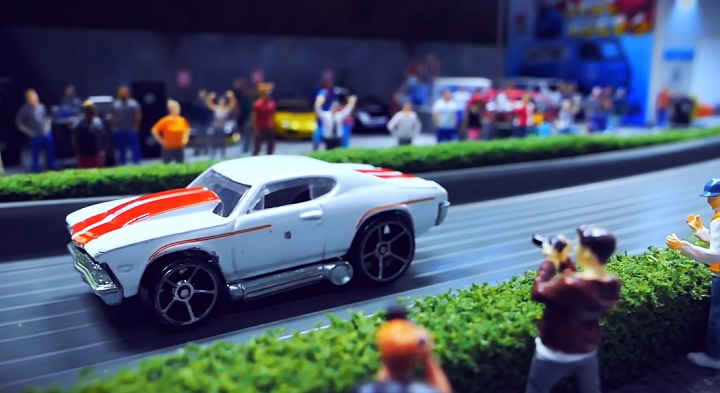 We think younger readers, or motorsports fans that love to watch anything go wheel-to-wheel, will definitely be amused by this fun channel. Check out the Chevy diecast race video embedded below to get an idea of what it’s all about.