The Pontiac GTO went out of production back in 2006 following a brief three-year resurgence that was spearheaded by former GM North America Chairman Bob Lutz. The chances of the Pontiac GTO coming back are zero, with GM discontinuing the Pontiac brand way back in 2010, but enthusiasm for the iconic muscle car nameplate still remains high among General Motors enthusiasts.

A digital rendering artist on Instagram recently used his talents to try and envision what a current-day recreation of the Pontiac GTO might look like. He envisions this fictitious new GTO as being based on the E2XX platform and sharing many parts with the Buick Regal GS, such as the headlights and front intake vents. Unlike the Buick Regal, though, the GTO is a two-door coupe and incorporates unique touches like a split two-segment Pontiac grille, the wheels from a Chevy Camaro ZL1 and a vented hood with an integrated GTO Judge-style tachometer.

The artist also envisioned what this new Pontiac GTO would look like after receiving the full Pro Stock drag racing treatment, kitting it out with wide rear beadlock wheels shod in sticky drag slicks, skinny front wheels and tires and a V8 engine with a blower sticking through the hood. The massive ‘The Judge’ vinyl decal on the doors is also hard to miss. 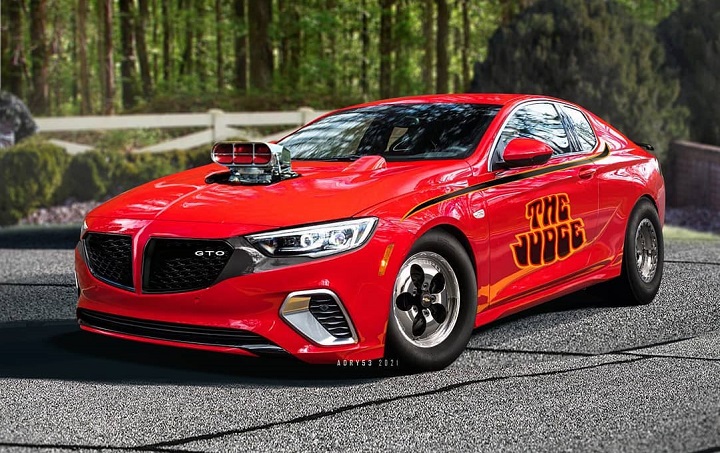 While the Pontiac GTO is as dead as can be, it’s interesting to see that some members of the online car community are eager to see the nameplate return. The current Ford Mustang, Chevy Camaro and Dodge Challenger are great vehicles, but we wouldn’t complain if we had another option available in the way of a new GTO.

Let us know what you think of this modern-day Pontiac GTO rendering by voting or commenting below, readers.