Following on from our live photo gallery of the 2022 Chevy Bolt EUV in Bright Blue Metallic paintwork, GM Authority is now studying the same vehicle in Silver Flare Metallic.

Silver Flare Metallic (color code GSJ) is included in the base price of the Bolt EUV, and the model pictured here is the range-topping Premier trim. 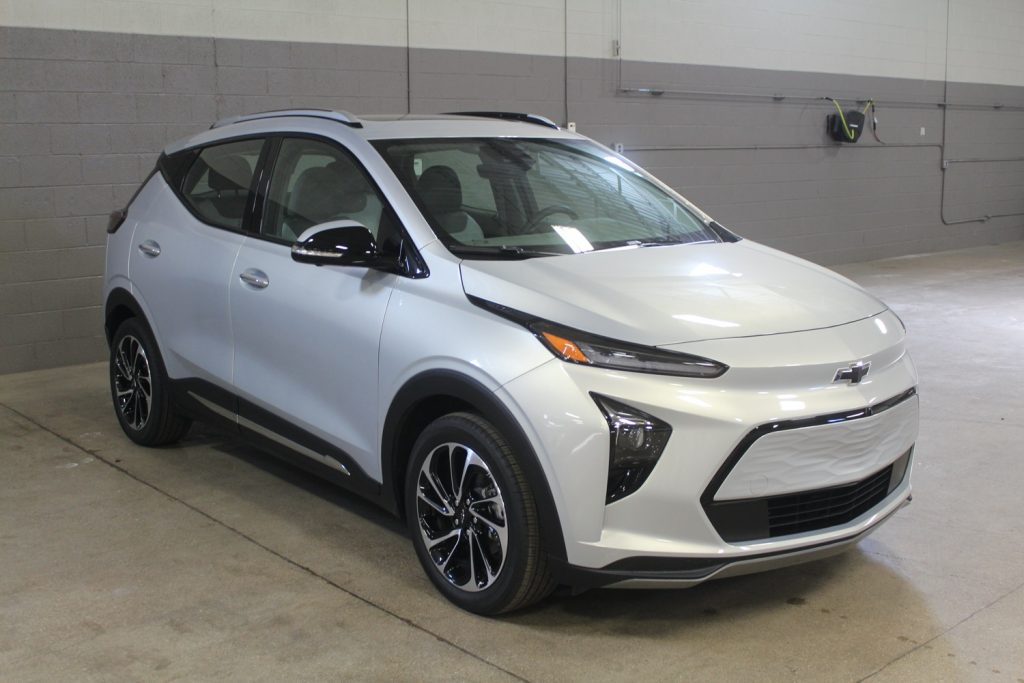 Although Silver Flare Metallic is far from being white, it provides a significant contrast with the black elements on the vehicle. As seen above, these include the elements surrounding the front grille intake and the gloss black line surrounding what would be the grille if the Bolt EUV were powered by an internal combustion engine. The panel surrounding the primary headlights is also black, and so too is the Chevrolet Bow Tie emblem – a standard feature both on this vehicle and on the refreshed 2022 Chevy Bolt EV. 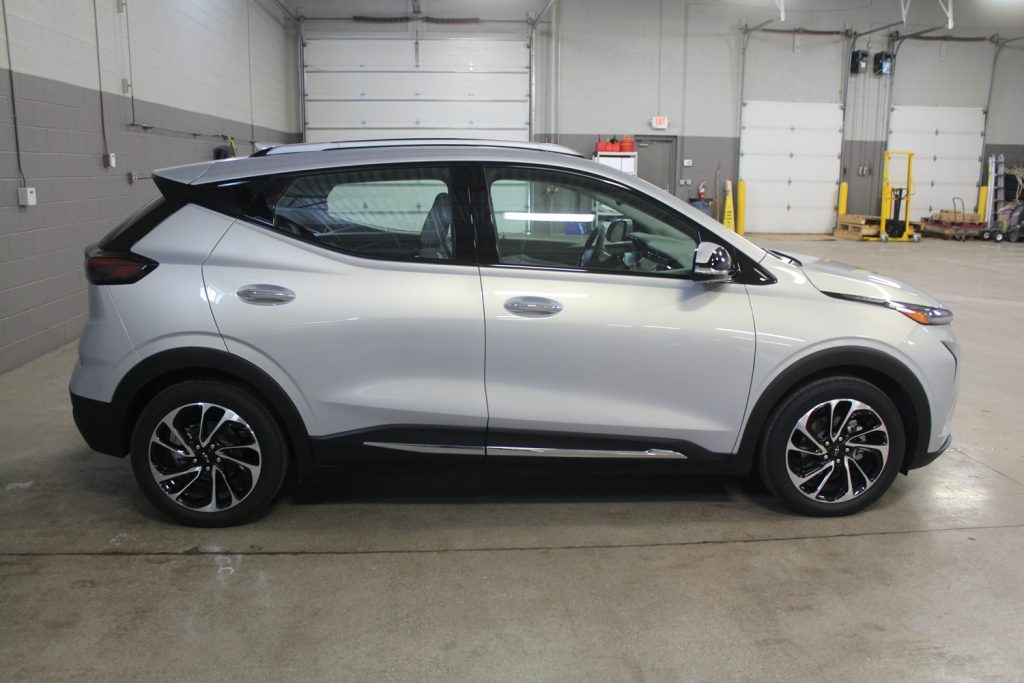 The front three-quarter and side profile views both show another contrast, this time between the Silver Flare Metallic paintwork and the black line running along the edge of the hood from the daytime running lights and turn signal indicators. In the side view, further contrasts with the gloss black of the B- and C-pillars are also very clear. 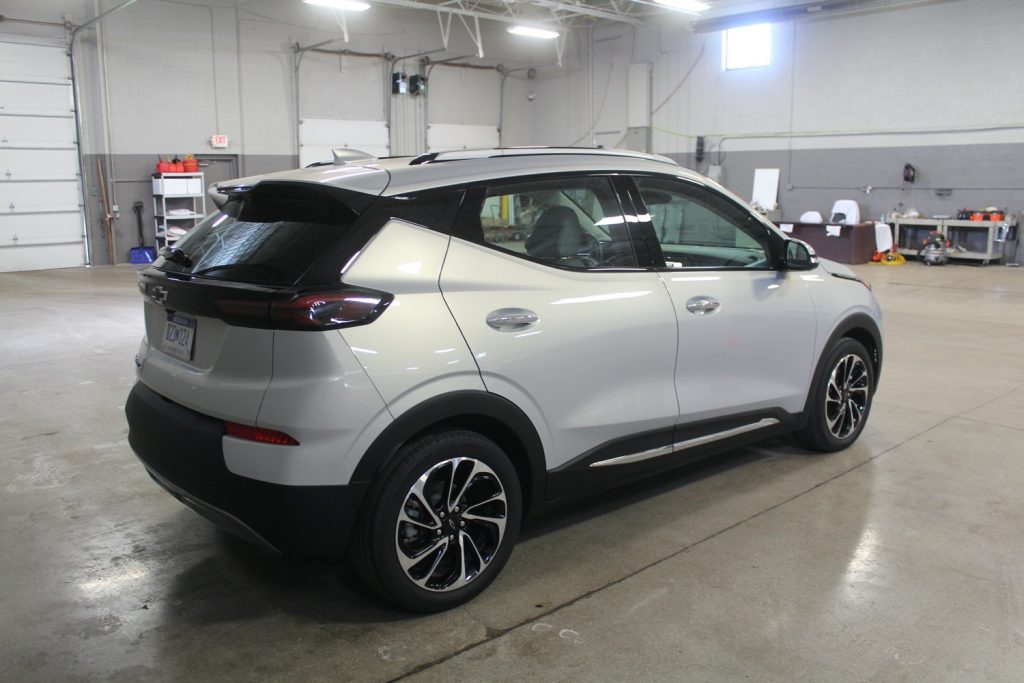 The side and rear three quarter angles reveal the large amounts of body-color metal on the doors. In fact, the Silver Flare Metallic paint reacts so strongly to light shining on it from different angles that it becomes difficult to tell what the base color actually is. Note also the 17-inch, machined-face aluminum wheels with carbon flash painted pockets and the long strips of shiny metal present at the lower edges of the doors, between the wheels. 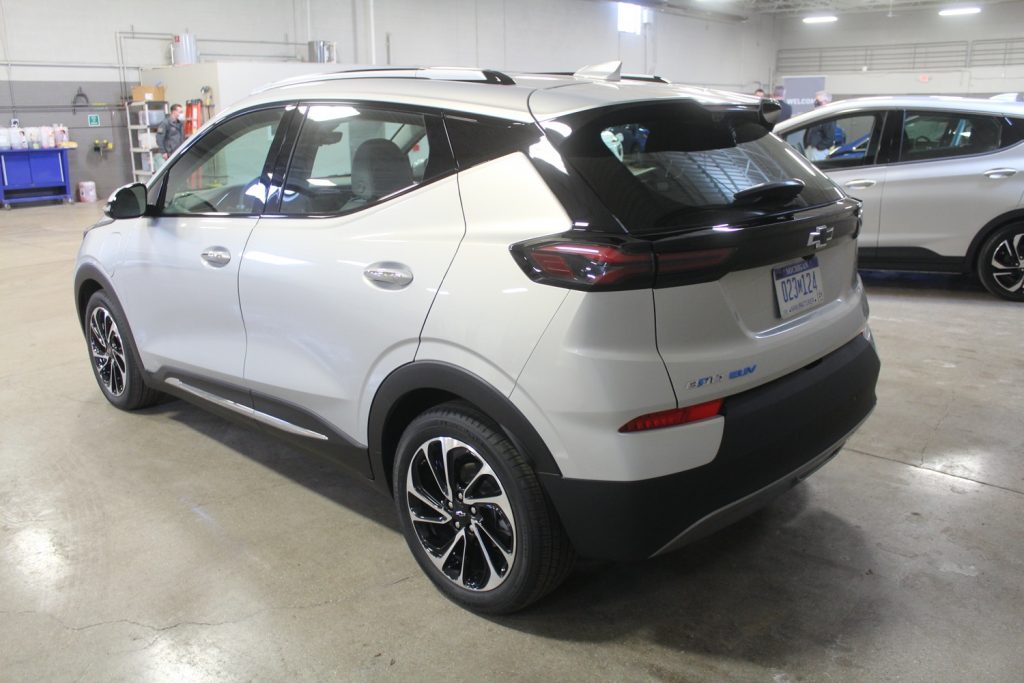 Toward the rear, Silver Flare Metallic (or indeed any color available for the Bolt EUV) becomes less dominant, and the contrasting black elements begin to take over. Above the vehicle’s waist line, these include the lower (rearmost) part of the roof spoiler, the area surrounding – and joining – the rear running lights, and the section of the C-pillar immediately beyond the liftgate, where the window line abruptly plunges downward from its rise from the center of the rear side windows. 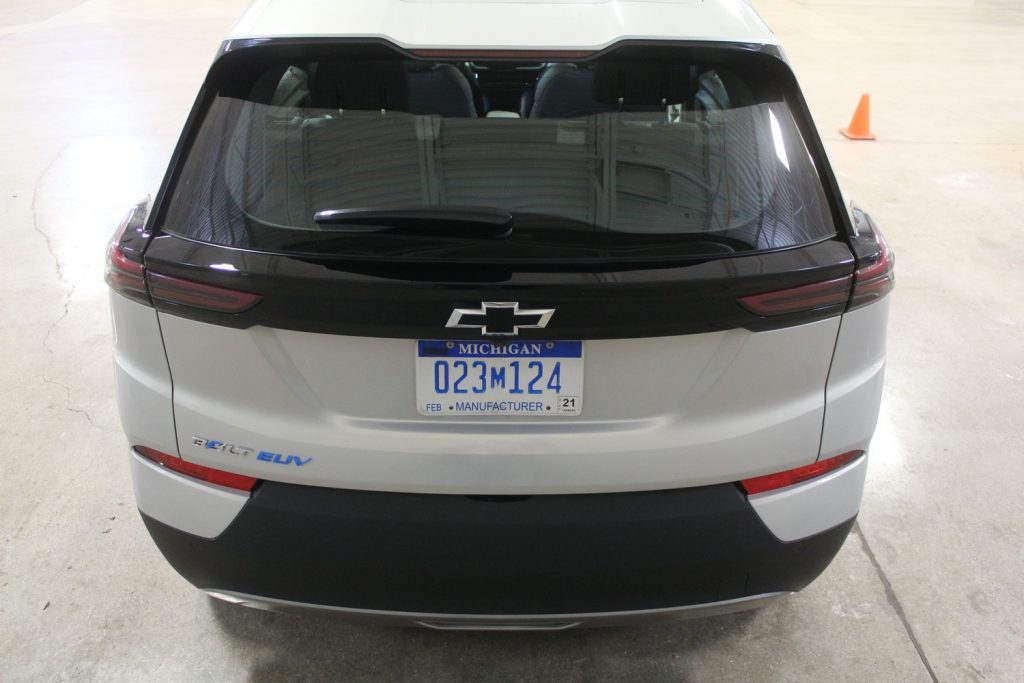 Further down, the rear bumper, which extends far enough up the fascia to separate the tail lights, is also black (yes, those two small, red horizontal strips bookending the black bumper are the actual tail lights). However, the silver plastic faux skid plate appears less obvious than it does when the Bolt EUV is painted in other colors. The plate is definitely not Silver Flare Metallic, but it is close enough to it to be less noticeable than it might be.

Finally, the EUV lettering on the driver’s side of the liftgate is blue. This not only provides another contrast to the base color but communicates the Bolt EUV’s credentials as a zero-emissions vehicle.

The Bolt EUV will be built at the GM Lake Orion plant in Michigan starting this summer. It will be based on the EV-specific GM BEV2 platform, and will have a permanent magnetic drive motor rated at 200 horsepower and 266 pound-feet of torque. The motor will be fed by a 65 kilowatt-hour, lithium-ion battery pack to deliver a GM-estimated range of 250 miles (402 km) on a full charge. Pricing will start at $33,395.