The 1958 model year saw a major facelift for the Chevrolet Corvette. The single headlight per side had been replaced by a pair – one low beam, one high. The previous year’s thirteen vertical chrome grille teeth had been reduced to nine, the hood had non-functional vents that looked like washboard ribs, and vertically-oriented chrome trunk irons were fitted to the rear decklid.

Inside, the dash had been redesigned. The tachometer had been moved from the center of the dash to the inside of the speedometer, just above the steering column. The tach read up to 6,000 RPM in 1,000 RPM increments for engines with outputs of 230, 245, and 250 horsepower, and up to 8,000 RPM for 270- and 290-horsepower mills. Secondary gauges were oriented to either side of the speedometer. Speaking of the speedo, it had a new top speed of 160 miles per hour (this was pure fantasy outside of race-prepped units). 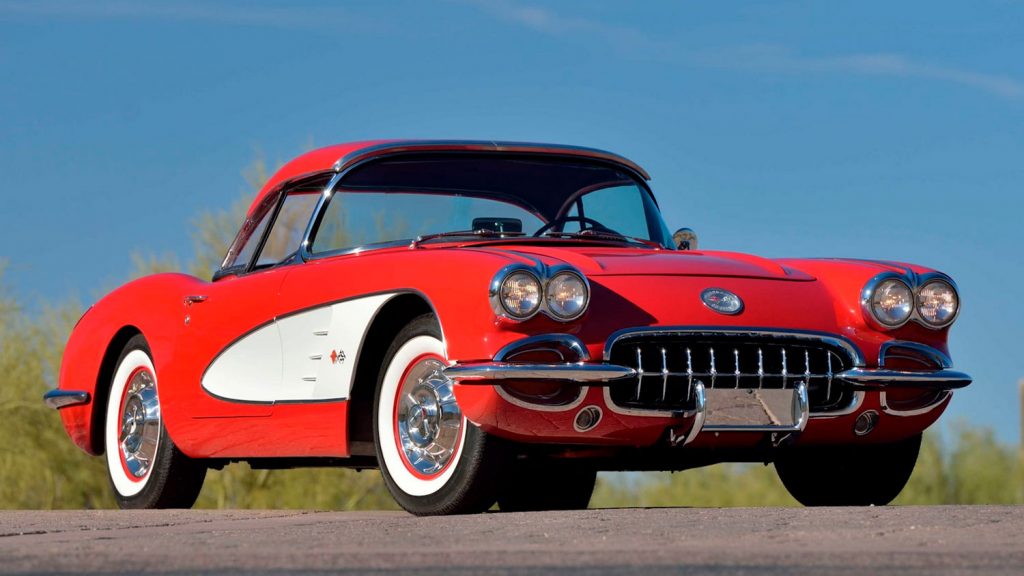 Model-year 1958 was the first one for factory-installed seat belts, which had previously been a dealer-installed option. On the passenger side of the cabin, a grab bar had been added, with an aluminum insert and white letters that spelled out CORVETTE mounted behind it on the dash. A parcel tray would not make an appearance until the 1959 model year. 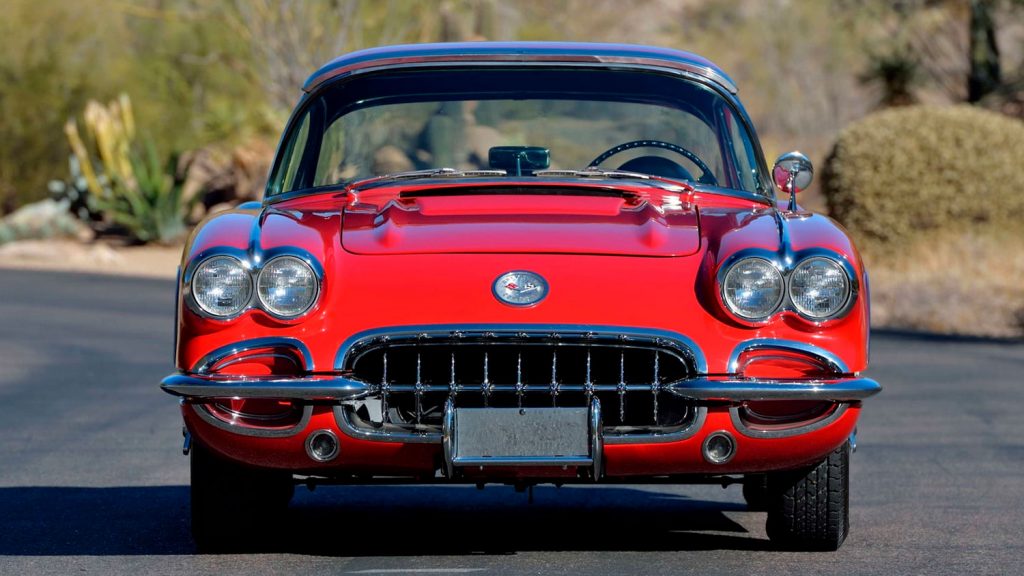 Our featured 1958 Chevrolet Corvette has been the subject of a body-off restoration. It has been painted in brilliant Signet Red with a Snowcrest White cove, one of just 756 so finished in ’58. The extensive chrome appears to have been replated, showing no signs of pitting or patina. Stainless trim is well polished. Glass appears to be free from road rash or windshield tracks, and weatherstrip looks to be recent. Both the soft top and optional hardtop are included. The plexiglass in the hardtop shows none of the crazing that is so common on these. Red-painted steel wheels are shod in Coker Classic wide whitewall radials, and topped with correct, non-slotted factory hubcaps with spinners. 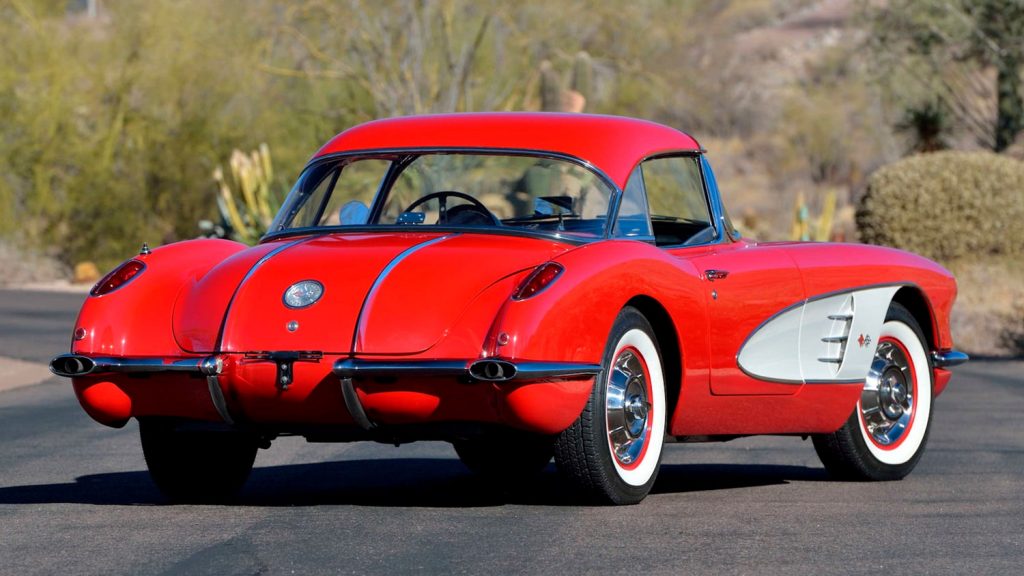 Inside this Chevrolet Corvette is a correct pebbled-vinyl black interior paired with red low-loop carpet. A parcel tray from a newer Solid Axle Corvette has been fitted beneath the passenger grab bar. An aftermarket stereo resides in the dash above the optional heater (yes, it was a $96.85 option). Other options include a power antenna, tinted windshield, and courtesy lights. The original owner’s manual accompanies the car. 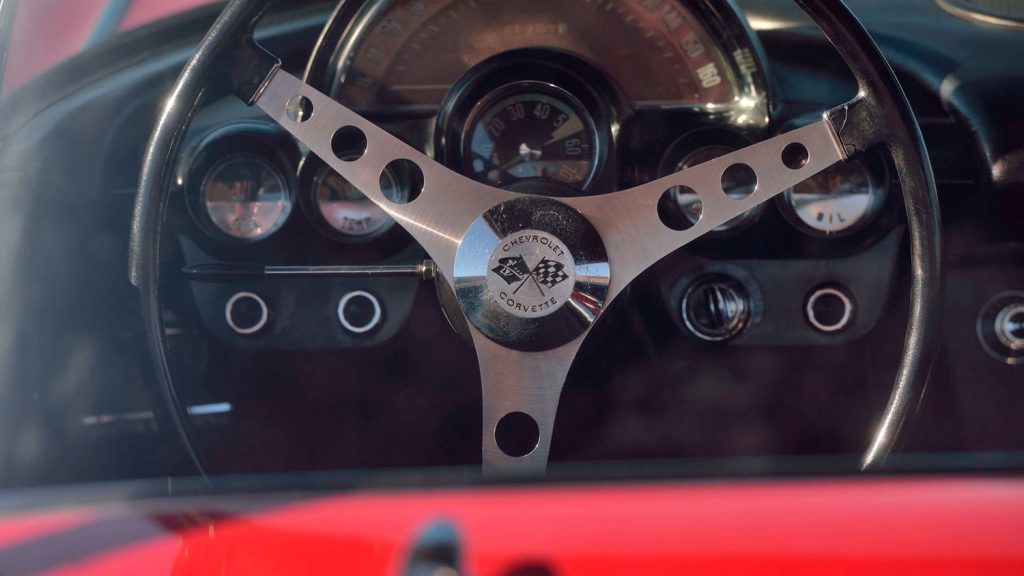 Under the hood of the Chevrolet Corvette resides a 230-horsepower, 283 cubic-inch V8. The 230-horsepower version was the base engine for 1958, but it has been fitted with the finned aluminum valve covers from a higher horsepower engine. All the finishes look to be correct in the squared-away engine bay. Proper ram’s horn exhaust manifolds are in place, as is the chrome distributor shielding. The tach drive cable is in place, running from the back of the generator to the firewall, and ultimately the back side of the instrument cluster. The polished aluminum air cleaner cover has a single dimple and wing nut for the four-barrel carb, a quick way to spot the base variant of the 283. 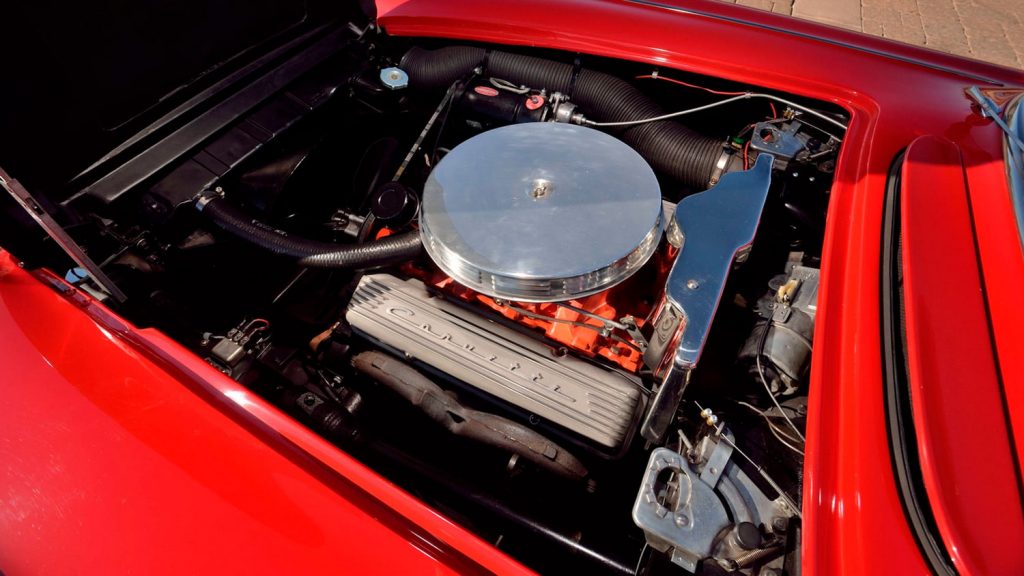 This Chevrolet Corvette will be heading to the auction block at the Mecum Auctions Glendale, AZ, event March 18th-20th. 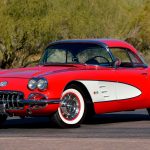 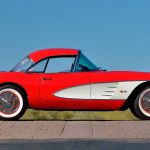 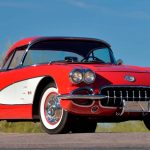 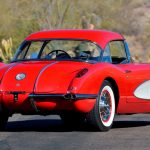 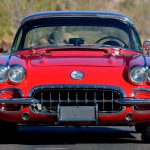 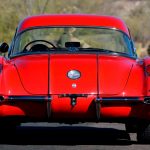 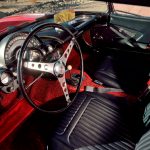 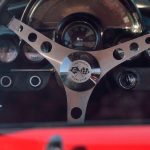 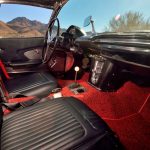 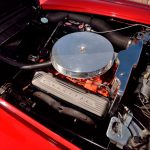