General Motors has entered a new co-branded advertising partnership with ViacomCBS that will promote the automaker’s new electric vehicle technology as well as the new Paramount+ streaming platform. 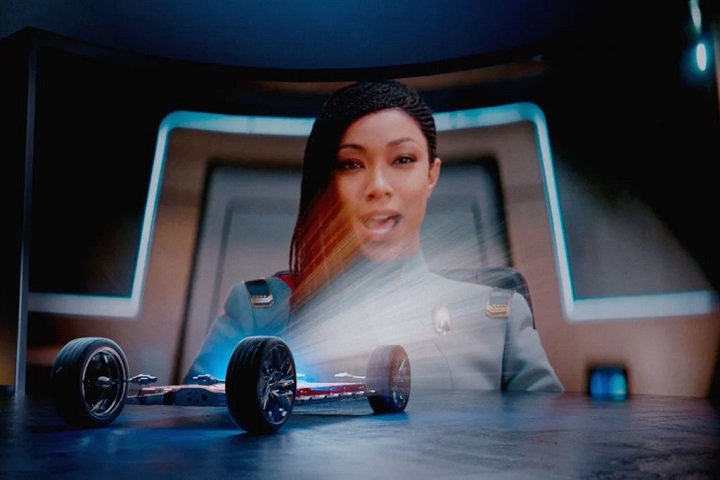 The new co-branded ad campaign was produced by ViacomCBS’ in-house creative team Velocity, AdAge reports. The ad, which is cut into both 15-second and 30-second versions, features a GM Ultium electric vehicle platform projecting holograms of Paramount+’s content library onto a large backdrop. The ads also integrate GM’s newly redesigned logo, which is intended to evoke a more progressive and tech-forward image amid the automaker’s transition to an all-electric portfolio.

“We could not be more excited about this partnership with General Motors,” David Lawenda, executive VP of digital sales and strategy at ViacomCBS, told AdAge in an interview. “It’s the first time ViacomCBS has ever partnered with a brand to create truly co-branded commercial.”

The joint advertisements will air on TV and digital platforms, as well as on various ViacomCBS properties. The ad campaign is set to air until the end of May, promoting the GM Ultium electric vehicle platform in the run-up to the launch of Ultium-powered vehicles like the GMC Hummer EV and Cadillac Lyriq crossover.

GM chief marketing officer Deborah Wahl says the co-branded ad campaign with Paramount+ is representative of a new direction its marketing department is taking. Going forward, GM ads will look to entertain the viewer first and provide general information on the vehicle or pricing second – a strategy that GM CMO Deborah Wahl hopes will increase consumer engagement with the brand. This strategy was first seen in the automaker’s ‘No Way Norway’ Super Bowl ad campaign, which was light on vehicle details, but heavy on laughs.

“We’ll continue to engage on a much higher entertainment level than just the facts of a car launch and the facts of the vehicle,” Wahl told AdAge.
Keep an eye out for the GM and Paramount+ advertisements as they hit TV airwaves and the web this spring.