One wouldn’t know it at first glance, but the all-new, all-electric 2022 Chevy Bolt EUV and the ICE-powered 2021 Chevy Trailblazer share many design similarities, despite being very different technically.

To start, the front ends of the two Chevrolet crossovers differ only in detail. In each case, the fascia is based on an approximate X shape, which starts with wide, but shallow lighting on either side of the Bow Tie logo. The design is drawn in just below the logo, before expanding outward again toward the lowest part of the car. 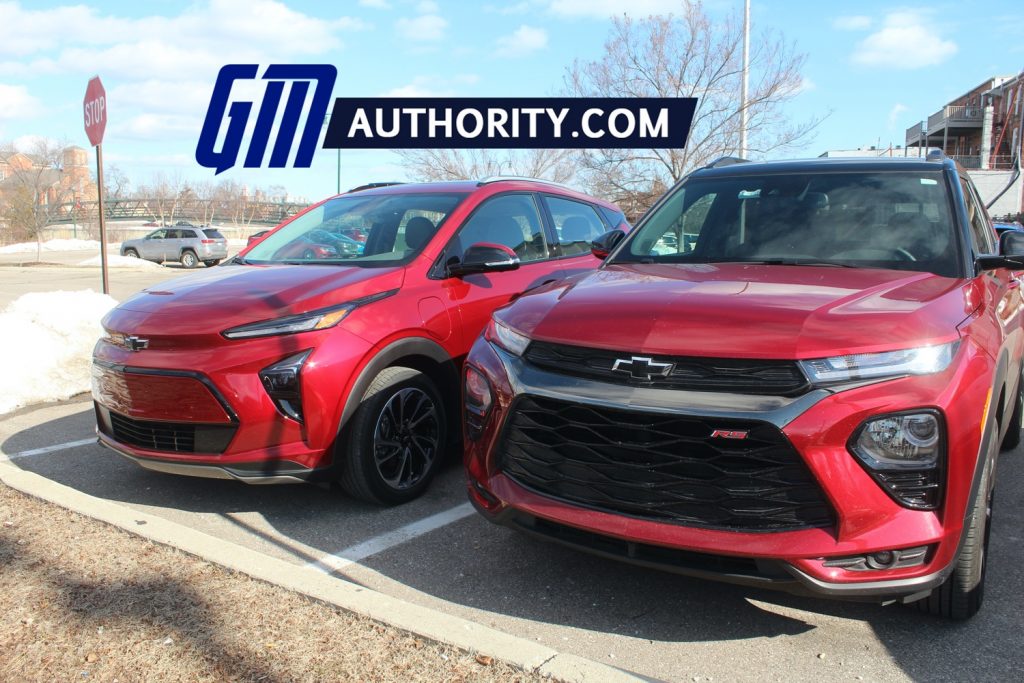 The effect is more noticeable on the Trailblazer, because the lower light units are wider, and therefore intrude further toward the vehicle’s center line. The chrome strip marking the narrowest point of the X also emphasizes the shape more than the equivalent body-colored section on the Bolt EUV. However, the X is still apparent on the electric vehicle, even though the effect is more subtle.

Today’s fashion of making front air intakes as large as possible is extremely obvious on the Trailblazer. Copying this was quite unnecessary on the Bolt EUV, which has no radiator requiring to be cooled, but going against fashion is a risky move. The Bolt EUV gives the impression that it has a big maw, even though it’s blocked off by a sculpted/patterned grille cover.

Also note that the front edge of the Bolt EUV hood is noticeably lower than that of the Trailblazer, but the electric vehicle seems lower still because of the contrasting front skid plate. 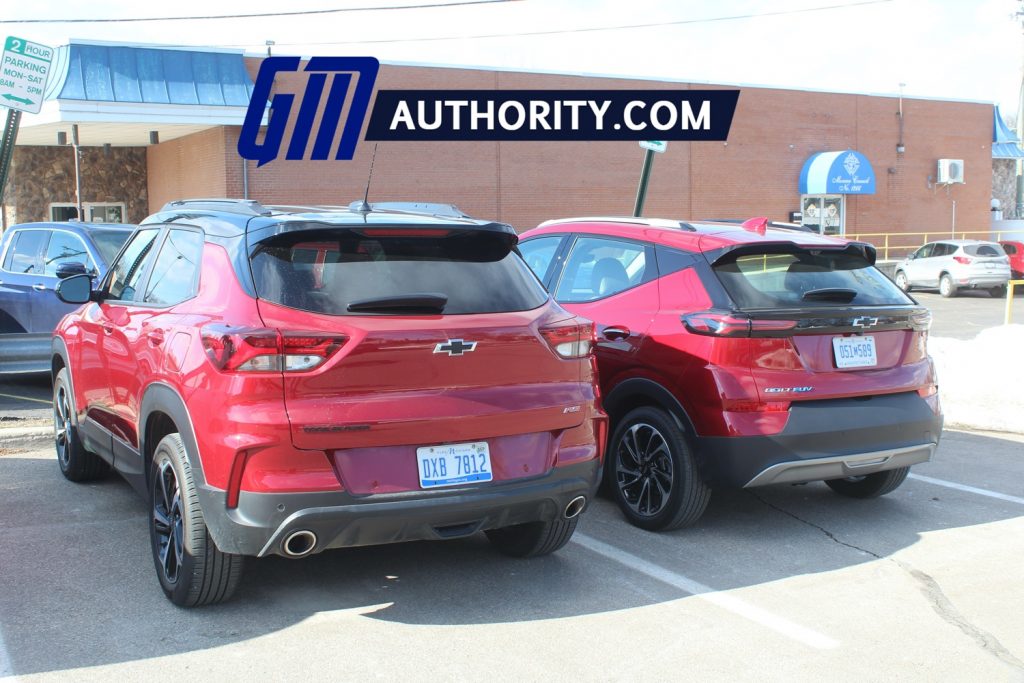 The same effect is apparent at the rear, where the Bolt EUV seems smaller than it actually is thanks to the placement of the license plate, the much more shallow tail lights, the dark panel joining them and the lower trailing edge of the roof.

That said, the family resemblance between the two is very much noticeable. Both models have a similar treatment of the rear spoiler, rear window and the vertical panels surrounding it. Additionally, both models have the Y graphic within their tail lights, albeit executed differently. There’s also the matter of the Bolt EUV having significantly more plastic cladding at the rear that extends much higher into the bumper, in addition to the lower-mounted brake and turn signal lights. 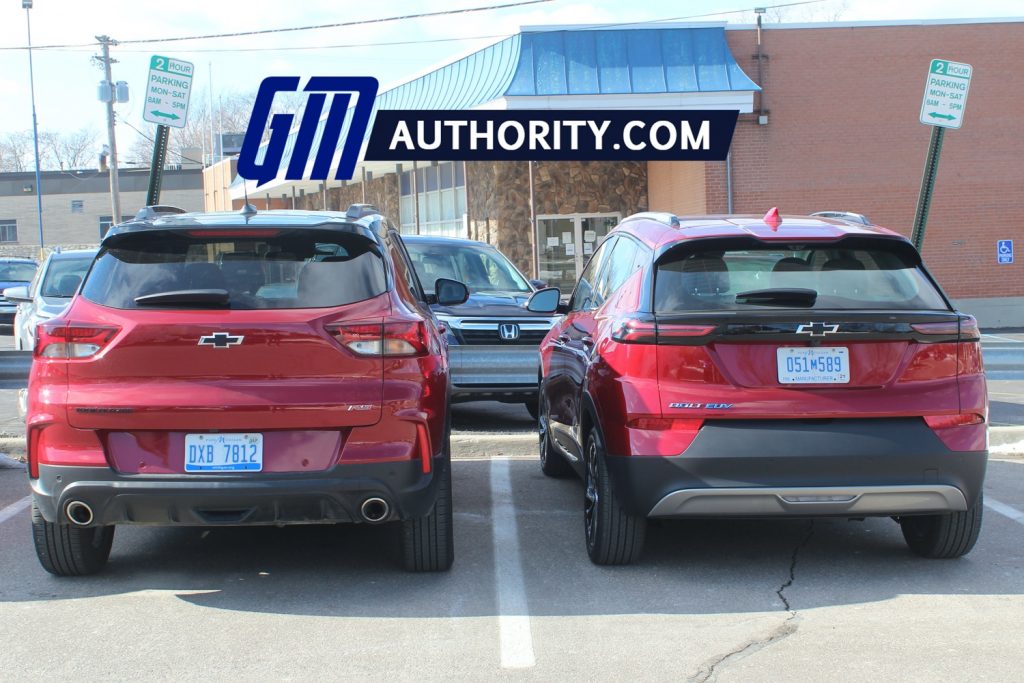 One notable design trait between the two models is the exhaust: the Trailblazer has an integrated, through-fascia dual exhaust treatment, while Bolt EUV has no exhaust outlets for obvious reasons. Incidentally, the dual exhaust treatment on the Trailblazer is unique to the RS and Activ models, and is in place purely for aesthetic reasons, rather than for mechanical ones. One exhaust outlet would have been enough for its three-cylinder engine. 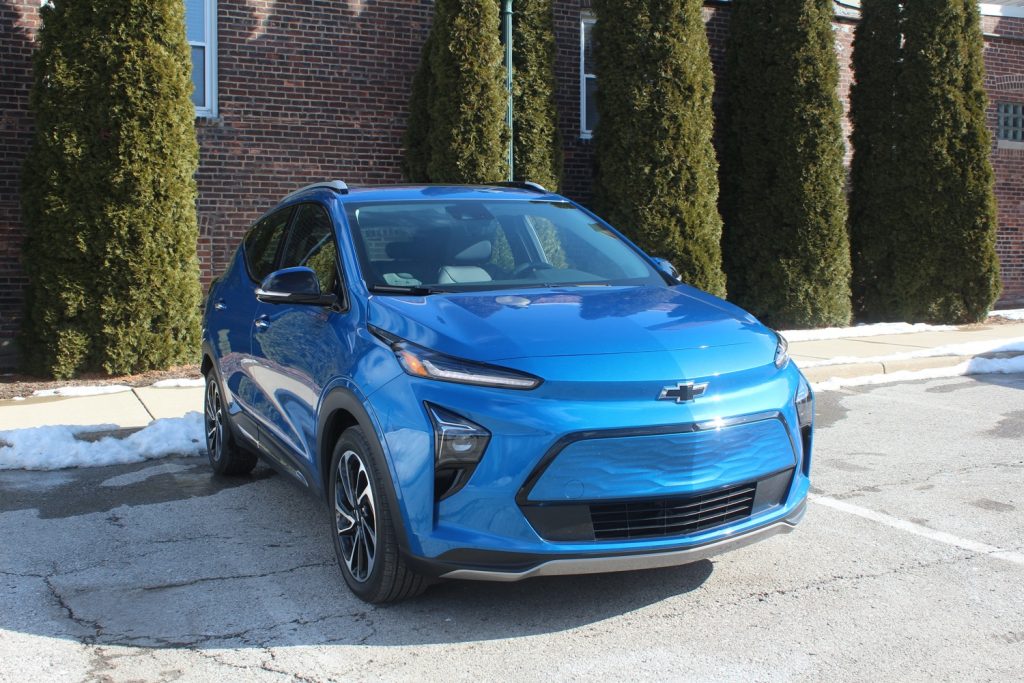 Although they are both subcompact crossovers with obvious similarities in terms of design, the two Chevrolet vehicles are very different in other ways. The Bolt EUV is part of GM’s electric revolution. It’s essentially a long-wheelbase version of the 2021 Chevy Bolt EV with extra rear legroom, and will go on sale this summer at about the same time as the refreshed 2022 Bolt EV. Both the Bolt EUV and Bolt EV are based on the BEV2 platform and have the same battery and electric motor, the latter making 200 horsepower and 266 pound-feet of torque. 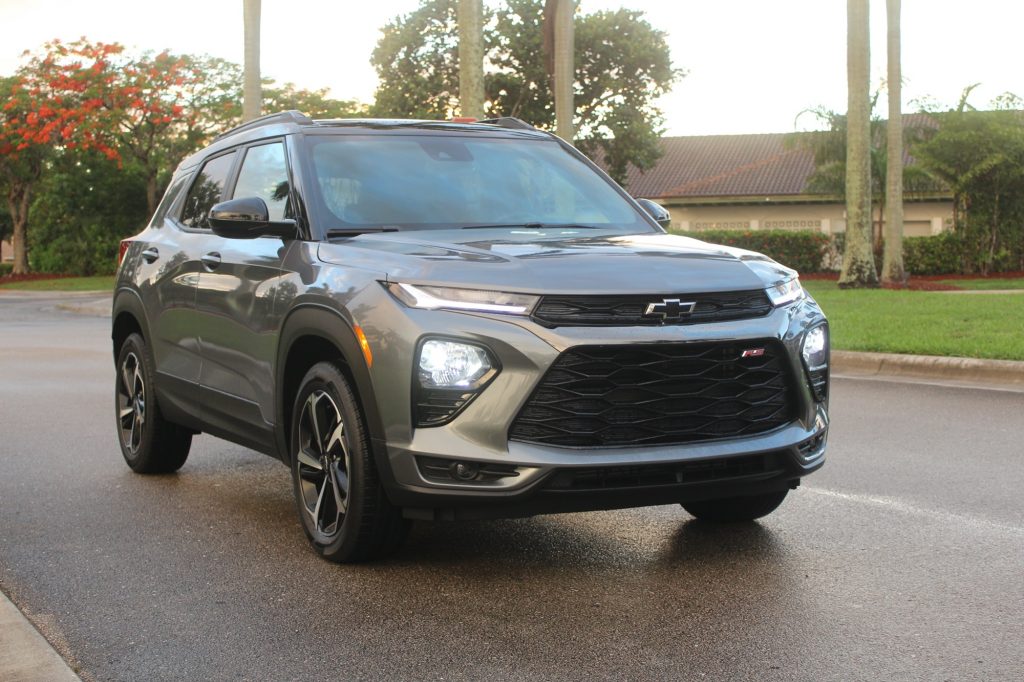 In contrast, the Trailblazer rides on the GM VSS-F vehicle set. The subcompact CUV offers a choice of two turbocharged three-cylinder gasoline engines. One is the 1.2L I3 LIH, which produces 137 horsepower and 162 pound-feet of torque, and is mated to a continuously variable transmission (CVT). The other is the 1.3L I3 L3T engine, which makes 155 horsepower and 174 pound-feet of torque, and is paired with either the CVT or GM’s nine-speed automatic transmission.

The design similarities between the Bolt EUV and Trailblazer show that Chevy’s design DNA runs much deeper than any single model. Instead, it permeates the brand’s entire product portfolio, making the vehicles instantly recognizable as modern Chevys.

Be sure to subscribe – at no cost! – to GM Authority for more Chevy Bolt EUV news, Chevy Trailblazer news, Chevrolet news and 24/7 GM news coverage.