We all have our favorite classic Chevys, and of those models, there are always the rare offerings. These are usually performance specials that had few examples produced, and have since become the stuff of legend, with stories passed around at car shows or garages. Here we will take a look at a trio of rare Chevy Nova models. 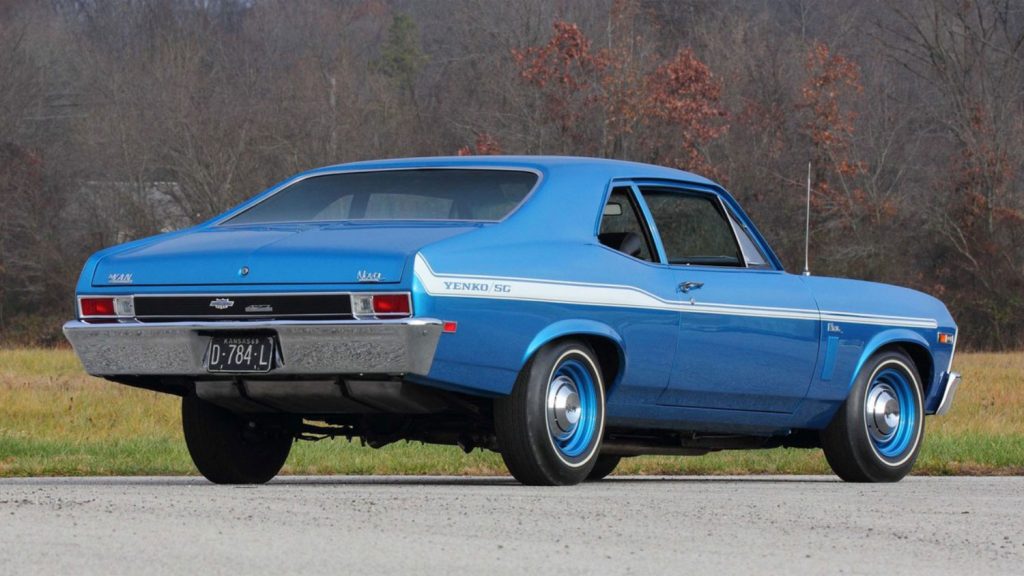 You know the car has to be a wild one if Chevrolet flat refused to make it as ordered, even through the Central Office Production Order, or COPO, program. Chevy would not deliver the 1969 Chevy Nova to Yenko Chevrolet with the L72 427 installed. Instead, Don Yenko had to order them as 396 COPO cars, order the L72 427s separately, then swap the L72 for the 396 upon delivery. The 396 COPO package was preferred as it already came with more robust frames, brakes, suspensions, and drivelines. Mr. Yenko himself indicated they probably shouldn’t have built the SC (Super Car) 427, saying “It was the wildest thing we ever did” in addition to “It was barely legal at best” and building it was “skirting the edge of product liability.”

The Chevy Nova Yenko SC 427 came equipped with the aforementioned L72 427 with 11.0:1 compression, rated at 450 horsepower. It is considered the fastest of the Yenko specials, as it was the lightest car with the biggest power. It was also difficult to keep pointed in a straight line when on the throttle. Zero-to-sixty times hovered around the five-second mark, with the quarter-mile sizzling past in under eleven seconds.

The Chevy Nova Yenko SC 427s also came with the standard Yenko stripe package and badging, but not a lot else, as performance was the goal. Only 37 Chevy Nova Yenko SC 427s were ever built, and it is thought that fewer than ten survive today. One sold at the 2015 Mecum Kissimmee auction for $380,000. Hagerty Price Guide puts pricing for a #1 condition SC 427 at $480,000, if you can find one for sale. 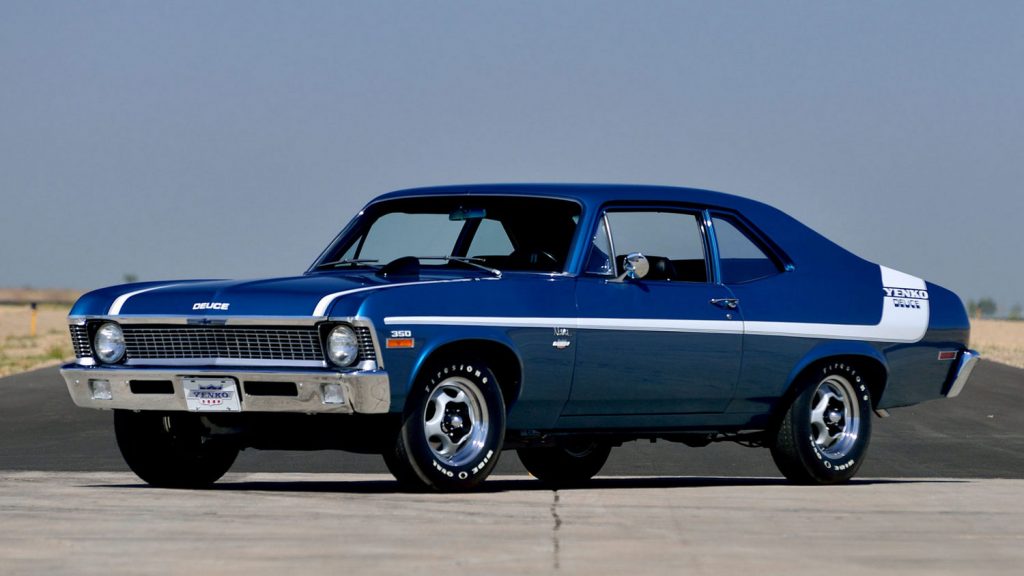 The 1969 Chevy Nova Yenko SC 427 was one for the record books. Enthusiasts took notice. So did insurance companies who balked at putting such a high-performance engine in what was considered at the time to be an economy car. Don Yenko knew the SC 427s were “lethal” and had described them as such. This, combined with the Clean Air Act of 1970, pushed Mr. Yenko to produce a Chevy Nova performance model with a Small Block 350. But not any 350 would do, particularly since it would be wearing the Yenko name. Only the hot LT1 found in the Corvette LT1 and Camaro Z/28 would suffice. These new Chevy Novas would be known as the Yenko Deuce.

The Chevy Nova Yenko Deuce was a COPO car. Yenko advertised them as a “mini musclecar.” It also managed to scoot under the performance car insurance premium. It came equipped with the high-compression 350 cubic-inch LT1 engine, producing 360 horsepower. It had a solid lifter cam, aluminum intake manifold, and finned aluminum valve covers. The Yenko Deuce was also equipped with F41 Sport suspension, and a 12-bolt Posi-Traction rear end with 4.10 gears. It could be had with either the Muncie M21 four-speed manual or the Turbo Hydramatic 400 three-speed auto. 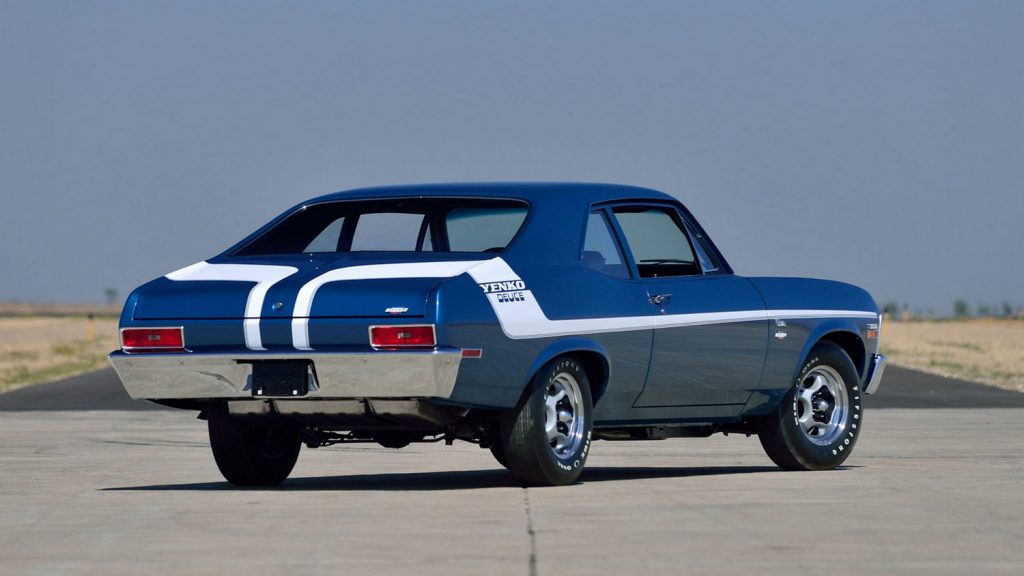 The Chevy Nova Yenko Deuce was a hoot to drive. Swap some headers and slicks onto it, and low 13-second quarter-mile times could be had with ease. 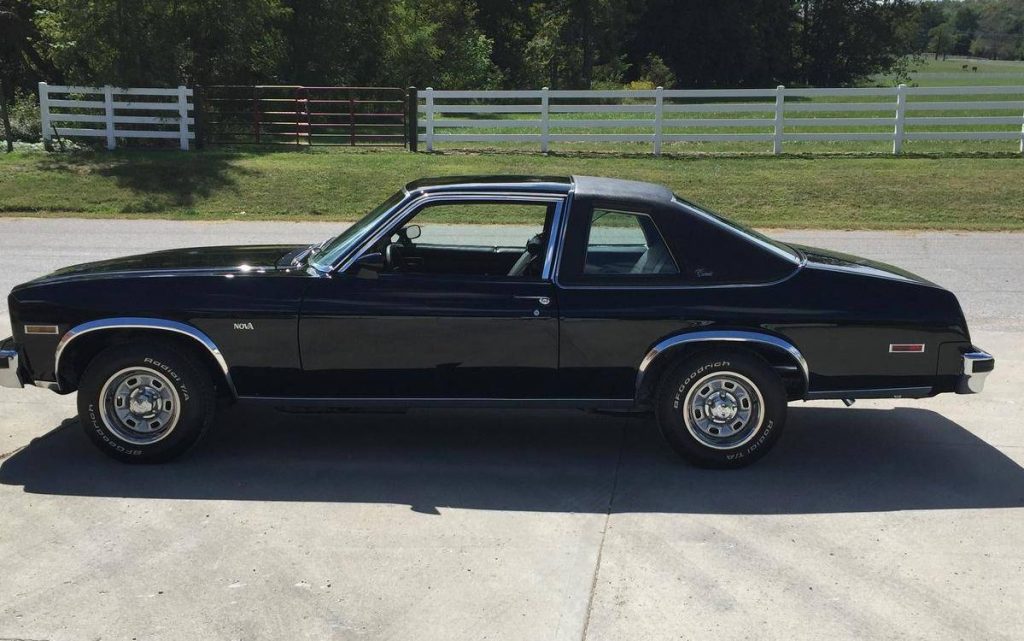 The 1978 Chevy Nova 9C1 (police package) Coupe may be one of the rarest Novas ever built.

In the mid-1970s, in the middle of the gas crisis, the Los Angeles Sheriff’s Department (LASD) was looking for a more efficient police cruiser. John Christy was both the Executive Editor of Motor Trend Magazine and an LASD Specialist Reserve Deputy.  He helped spearhead the effort to find a police cruiser that would cost less to operate, thus saving taxpayer dollars. John was of the mind that a smaller police car would be more fuel efficient and better for police work. The eventual verdict was the Chevy Nova would be best suited for the duty. Mr. Christy wrote a letter to Chevrolet asking for them to create a police package for the Nova, and Chevy agreed.

The 1978 Chevy Nova 9C1 Coupe may be the rarest Nova ever produced. Almost all other Police Novas were built as four-doors. Research has turned up only a single example built as a coupe ordered as a 9C1 (there may be others, but documented examples have not been located). This Chevy Nova 9C1 Coupe has all of its documentation from new, including the window sticker and build sheet. It was ordered from a Chattanooga, Tennessee, dealer in 1978. Aside from a single repaint, it is original, with a scant 31,000 miles on the odometer.  It has 31 factory options including A/C, tilt wheel, cruise control, and the landau top. The owner claims it is a one-of-one car. It sold in 2017 for $24,500.