One of the defining characteristics of any pickup is a bed with a tailgate. But what if you built a pickup with two gates, one at the rear and one on the side? This was part of the design genius of the Chevrolet Corvair Rampside.

The Chevrolet Corvair Rampside, also known as the 95 for its 95-inch wheelbase, was one of a number of Corvair models produced between 1959 and 1969. The trademark of all Chevrolet Corvair models was the air-cooled flat six-cylinder engine in either 2.3L, 2.4L, or 2.7L displacement. With pickup trucks, commercial and passenger vans, two-door coupes, convertibles, four-door wagons, and four-door sedans available, the Chevrolet Corvair was directly targeted at Volkswagen customers. This was done with the idea that the flat-six Corvair would be more powerful, and combined with a fully independent suspension, more appealing to the American market. 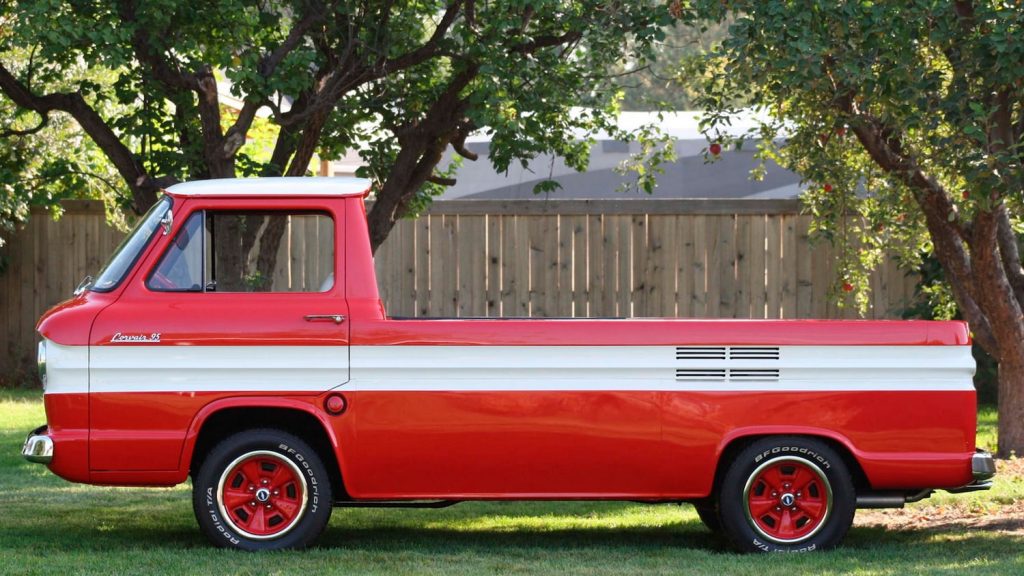 Our featured Chevrolet Corvair Rampside has spent the majority of its life in the dry climes of Arizona, ensuring a rust-free basis for the “no expense spared” restoration. The red and white paint job appears to have been done to a decent standard, with a good bit of shine to it. Chrome and stainless trim are in equally appealing nick. Glass is clear, showing no undue road rash, and the weatherstrip appears recent. The bed of the Corvair Rampside looks to have been shot with a matching spray-in bedliner. Traditional steel wheels have been replaced with Chevelle SS-style units painted a matching shade of red and wrapped in raised-white letter BFGoodrich Radial T/A tires. 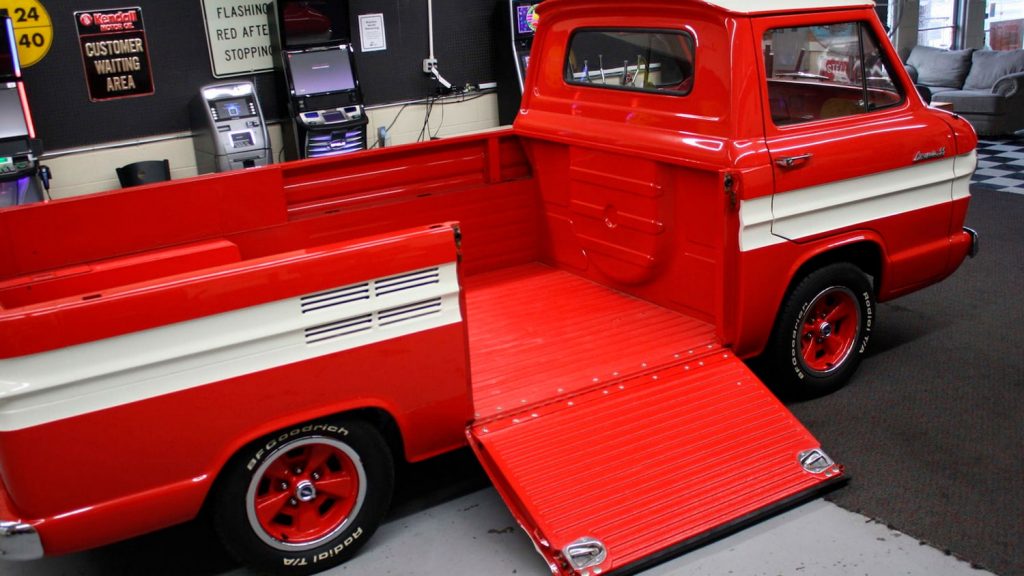 Inside the Corvair Rampside’s spartan interior, the bench seat has been recovered in white and light gray vinyl. Red seat belts have been fitted, a lap belt for the center passenger, but newer shoulder belts for the outboard occupants. On either side of the metal dash cab, there are nicely stained and shaped oak panels, one for the glove box, and one surrounding the gauge cluster. The shifter for the four-speed manual transmission snakes beneath the bench seat to its linkage, rather than being mounted to the center of the floor. 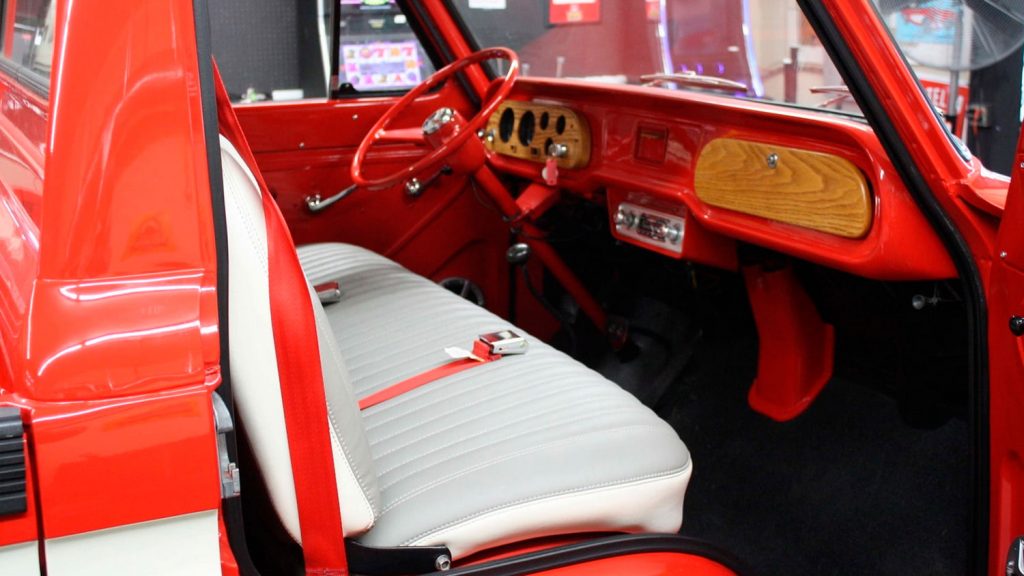 The bed of the Corvair Rampside is a stepped affair, rising higher to accommodate the rear-mounted engine. Beneath the cover lies the 2.3-liter flat-six. The engine bay is reasonably tidy. The Rampside’s listing mentions upgrades to the 2.3-liter engine, but does not specify what beyond switching to four single-barrel carburetors. Readily visible is the weird but working fan belt that transitions ninety degrees from one pulley to the next. 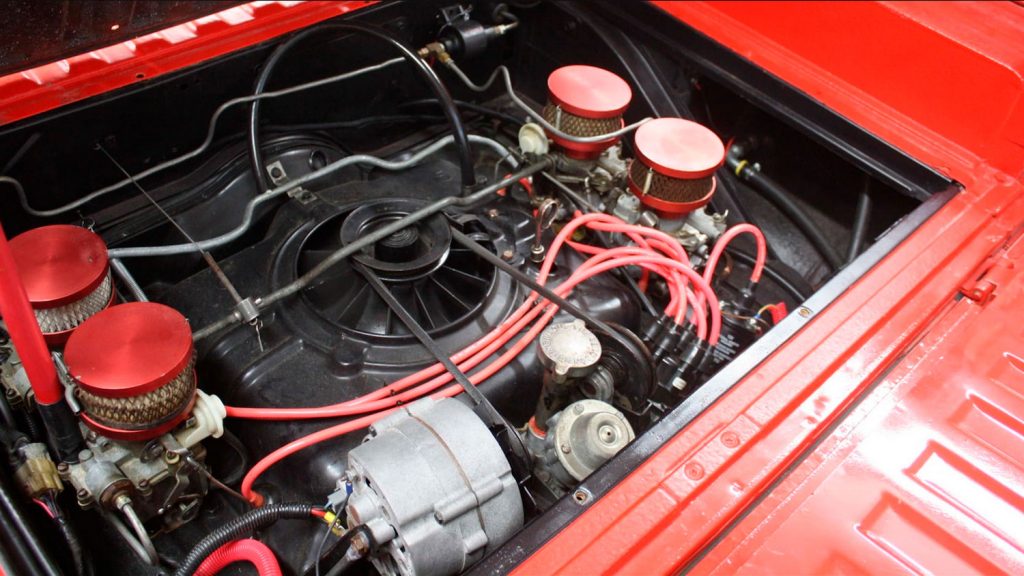 This Corvair Rampside will soon be crossing the auction block at the Mecum Auctions’ Glendale, AZ sale going on from March 18th to the 20th. 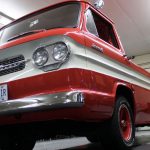 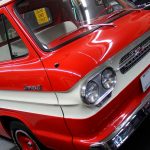 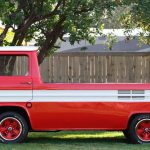 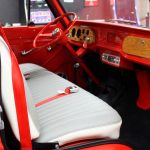 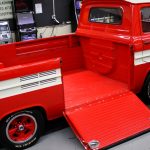 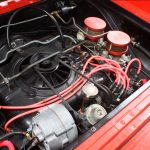