In 1957, if you wanted a General Motors convertible, and wanted it to be a bit more than the Chevrolet Bel Air, you could have had an Oldsmobile Super 88. It was the top of the 88 lineup, powered by the 371 cubic-inch Rocket V8 producing 277 horsepower and 400 pound-feet of torque. The Super 88 could be had with either a three-speed manual or the much more common four-speed Hydromatic automatic transmission. By adding the optional J2 triple two-barrel carbs (similar to Pontiac’s Tri Power setup), power jumped to 300 ponies. 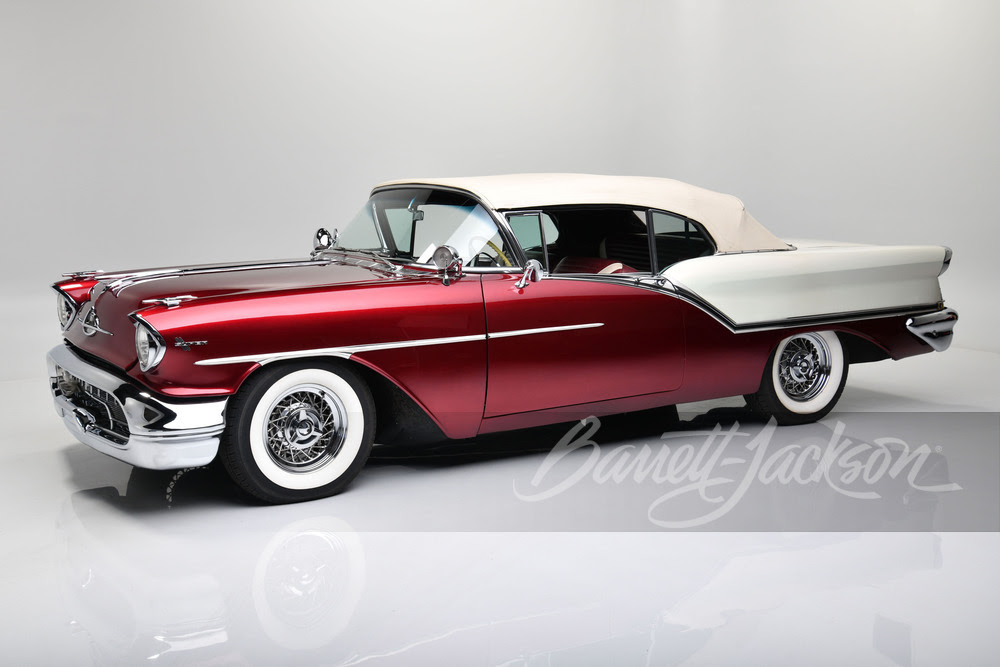 This Oldsmobile Super 88 has been treated to a stunning and lustrous custom Brandywine Burgundy and Pearl White paint job done to a high standard. The extensive chrome trim presents as new. Stainless trim is likewise shiny and brilliant. The white vinyl convertible top appears to have been recently installed. Buick chrome wire wheels wear wide whitewall radial tires. Dual chrome spotlights are mounted on either side of the windshield. 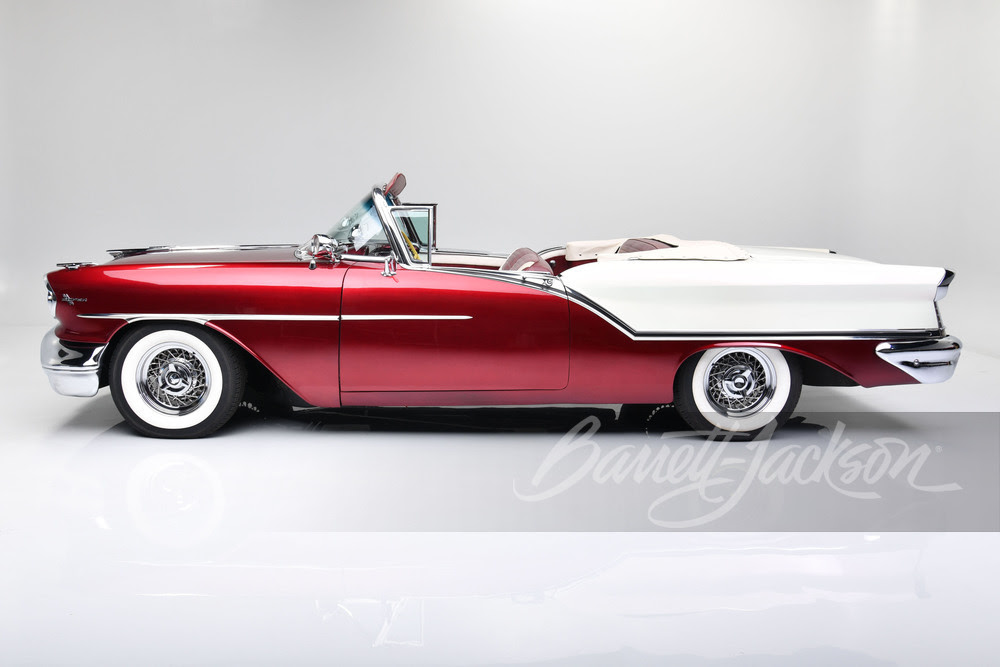 The Oldsmobile Super 88’s interior is equally stunning. The front and rear bench seats are trimmed in burgundy and white vinyl. Red seat belts, likely modern reproductions of original equipment, have been fitted. Brandywine Burgundy paint covers the top of the dash, and Pearl White covers the lower portion. Between them is a band of highly-polished stainless that holds most of the dash knobs, controls, and the optional signal-seeking Wonder Bar AM radio. The oval clock stares out from the center of the dash like an eye. The oval theme continues, as the large oval speedometer dominates the dash in front of the driver, and the steering wheel’s center is adorned with an oval Super 88 emblem. There is a trio of auxiliary gauges mounted low and left of the steering column. The Super 88 is optioned with air conditioning, power front seat, and a power antenna. A white vinyl convertible boot covers the top when lowered. 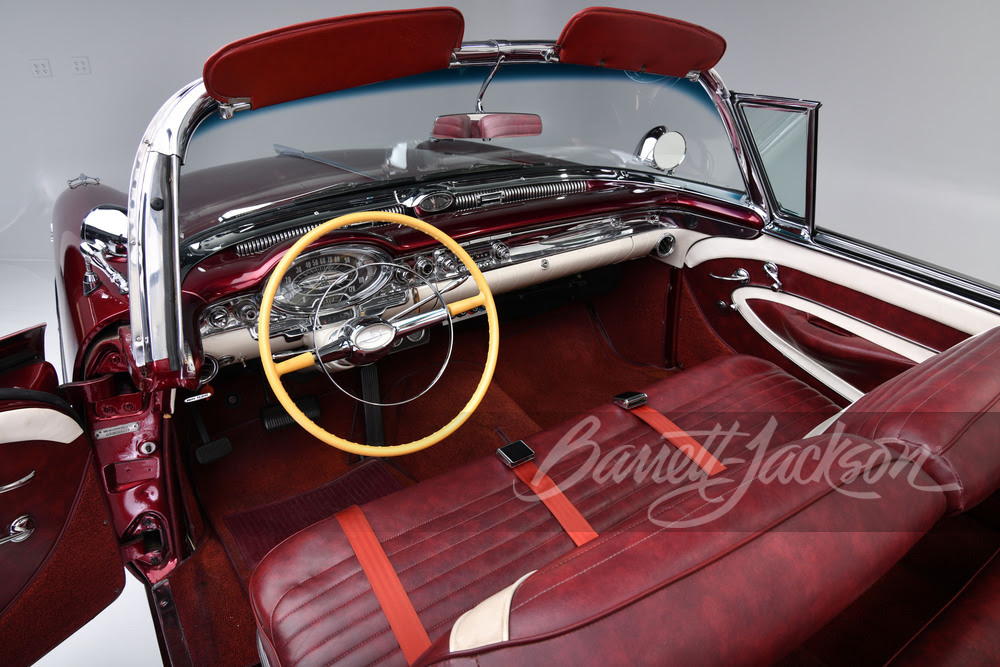 Inside the Oldsmobile Super 88’s tidy engine bay, we find the Rocket V8, topped with the optional J2 triple two-barrel carb array. A modern A/C compressor has been fitted, along with a Wilwood power brake booster powering the front disc and rear drum brakes. Save for a modern battery and radiator cap, the rest looks quite original. 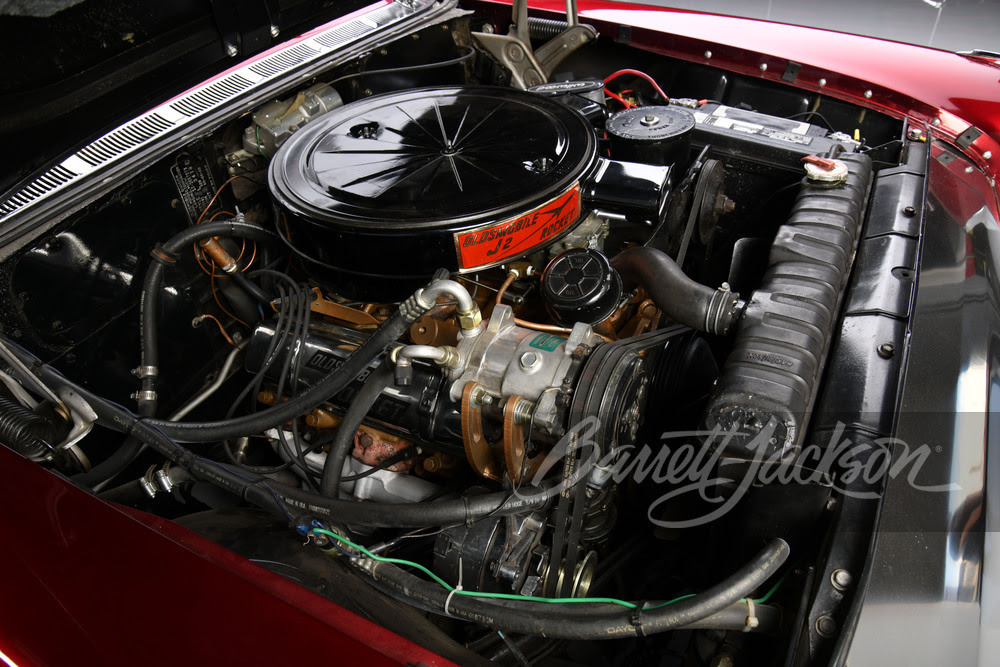 This Oldsmobile Super 88 will be up for grabs at the Barrett-Jackson Scottsdale auction from March 20th to the 27th.