Following a teaser aired during the Rolex 24 At Daytona endurance race, GM has finally unveiled the 2022 Cadillac CT4-V Blackwing, adding a new range-topper to the CT4 sedan lineup.

The Cadillac CT4-V Blackwing signals its top-dog position with a variety of exterior cues and aero upgrades. The front end is equipped with a pronounced lower lip section, which is attached to a reshaped bumper with new side intakes. A large spoiler was added to the trunk, and there are new underbody panels that reduce drag. Black trim is used extensively. Wheel sizing is set at 18 inches, front to back.

Inside the cabin, drivers get to grips with a leatherette performance steering wheel, as well as various carbon fiber trim bits. The Cadillac CT4-V Blackwing also features performance front seats with 18-way adjustability and heating, plus optional ventilation. Models with a manual transmission rock a shift knob that incorporates a 3D-printed metal medallion. Three interior trim levels are offered, each with unique features and tech. Apple CarPlay and Android Auto are standard, as is wireless phone charging.

While the Cadillac CT4-V Blackwing is exciting to look at and sporty inside the cabin, it also has all the right performance upgrades to match the more aggressive demeanor. The star of the show is the twin-turbo 3.6L V6 LF4 gas engine, which was previously equipped in the Cadillac ATS-V, with output now rated at 472 horsepower and 445 pound-feet of torque. Sending that muscle to the rear wheels is a standard Tremec six-speed manual transmission, but a 10-speed automatic is also on offer.

Sixty mph arrives in 3.8 seconds, while top speed is pegged at 189 mph.

Further standouts include special Michelin Pilot Sport 4S tires sized at 255/35R18 in front and 275/35ZR18 in the rear, plus upgraded Brembo brakes. Magnetic Ride Control 4.0 keeps it all under control. 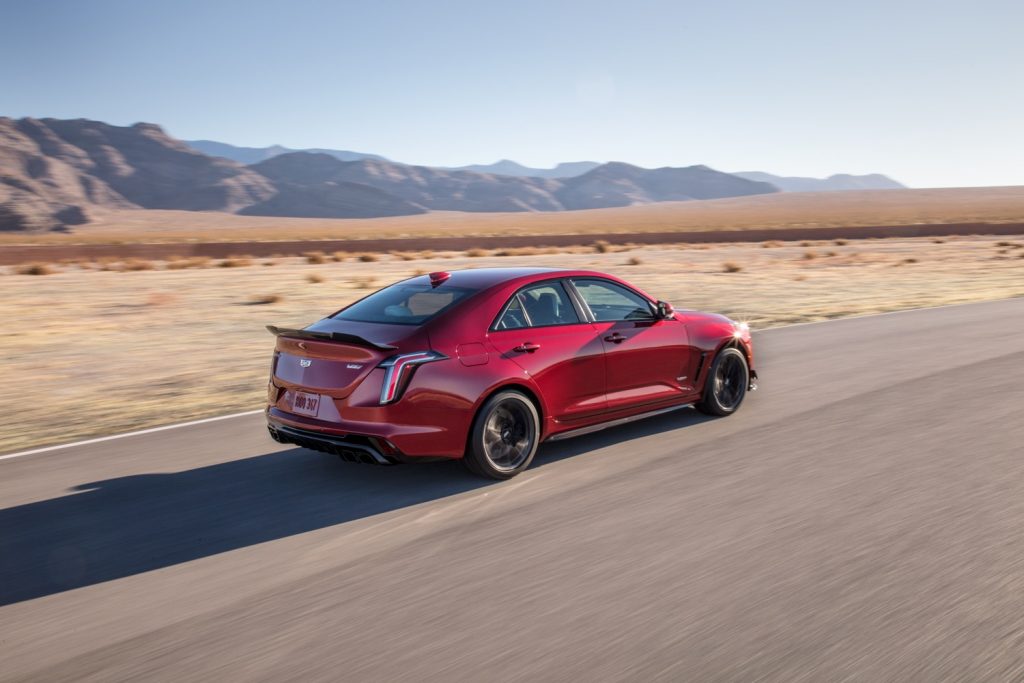 As GM Authority was the first to report, order books for the Cadillac CT4-V Blackwing open at 7:30 p.m. EST following the vehicle’s official debut. The first 250 customers in line will receive a free session at the Cadillac V-Performance Academy at the Spring Mountain Resort racetrack in Nevada. The first 250 units also include a special serial number plate and certificate of authenticity.

Pricing starts at $59,990. Deliveries get underway in the summer.

We’ll have plenty more to report on the 2022 Cadillac CT4-V Blackwing, so stay tuned. In the meantime, subscribe to GM Authority for more Cadillac CT4 news, Cadillac news, and around-the-clock GM news coverage.