Stock car racing gets its name from the early days of the sport, when the vehicles that many drivers would enter into races would be based on showroom-ready vehicles available for purchase and only fitted with minor modifications. Today’s NASCAR Cup Series cars have next to nothing in common with the production vehicles they are meant to represent, but during a recent segment aired by FOX Sports, Jeff Gordon and Clint Bowyer put the “stock” back in “National Association for Stock Car Auto Racing.”

The segment features Gordon and Bowyer, two former NASCAR racers turned FOX Sports commentators, as they get behind the wheel of two regular old rental cars for a quick two-lap race around the infield road course at the Daytona International Speedway. Gordon only ever raced Chevys during his NASCAR career, so he opts for the Chevy Malibu for his faceoff with Bowyer. The Ford Fusion goes to Bowyer, who raced a Blue Oval for the latter half of his Cup Series tenure.

Jeff Gordon and Clint Bowyer are race car drivers at heart, so while this segment was supposed to be all for fun, these two take their rental car rivalry seriously. Almost immediately, Bowyer spins Gordon out as they head into Turn 3, but the four-time NASCAR Cup Series champion eventually pays him back as they race side-by-side through the banking. The race ends as Gordon spins Bowyer out exiting Turn 3 and takes off into the horizon with his co-host facing the opposite direction. 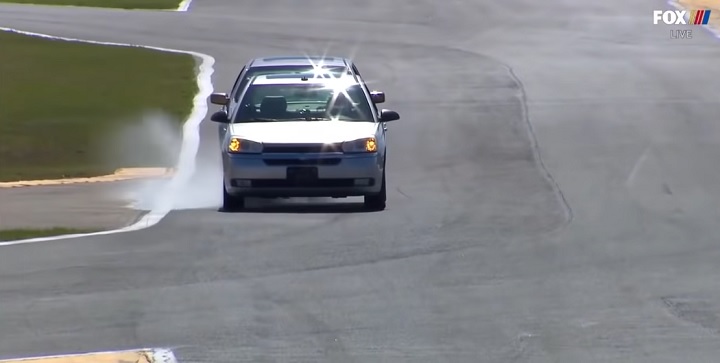 Check out the video embedded below to see Jeff Gordon and Clint Bowyer come out of retirement to race some true “stock cars” at Daytona. You won’t want to miss this rental sedan showdown.