Jay Leno is the proud owner of some of the most sought-after General Motors vehicles ever built, including a Chevy Corvair Yenko Stinger, 1957 Buick Roadmaster and countless Chevy Corvettes. But for a recent episode of his Jay Leno’s Garage YouTube show, the car-obsessed former talk show host decided to pull out a more obtainable and run-of-the-mill GM product from his personal collection: a 2002 Pontiac Trans-Am WS6.

Leno acquired this Pontiac Trans Am WS6 after he was asked to drive the pace car for the 2002 Daytona 500. GM asked Leno what kind of compensation he would like in exchange for leading the field to green and, being a true car guy, Leno asked if they could just pay him in product. This gave GM the idea to gift Leno one of the limited-edition 2002 Pontiac Trans-Am Daytona 500 pace car models, but he wasn’t interested in putting one of the bright yellow special edition models in his garage.

Instead, Leno had GM deliver him a regular 2002 Pontiac Trans-Am WS6 finished in a more approachable Navy Blue Metallic body color and with a six-speed manual transmission. While Leno certainly has much faster and much more valuable cars in his Los Angeles-based collection, he still has a soft spot for his WS6, affectionately referring to it as a four-seat Corvette. Leno’s WS6 is also bone stock (apart from the Optima battery that he throws in all of his collection cars), as he finds it fun to keep a car exactly how it was when it left the factory. The 5.7L LS1 V8 engine also has plenty of power for Leno’s tastes, pumping out a respectable 325 horsepower and 350 pound-feet of torque. 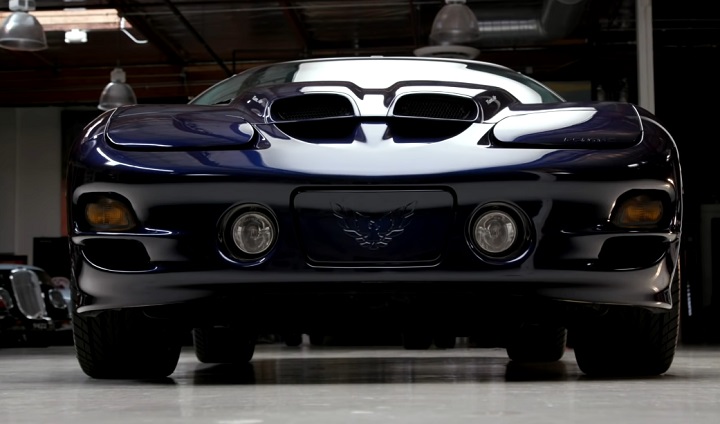 Check out the video embedded below to learn a bit more about the 2002 Pontiac Trans-Am WS6 and see Leno take his own personal WS6 for a cruise around the sunny streets of LA.