The Specialty Equipment Market Association (SEMA) show in Las Vegas is one of the largest gatherings in a city known for huge conventions. The show brings together aftermarket manufacturers, media, OEM manufacturers, car dealers, specialty equipment distributors, installers, retailers and restoration specialists. It is also one of the best car shows anywhere, as everyone with a product to sell tries to showcase those products with custom builds that are out of this world. This Chevy Camaro, known as Grimm 7.0 is one of those builds. It was featured at the 2019 SEMA show, and it is breathtaking. 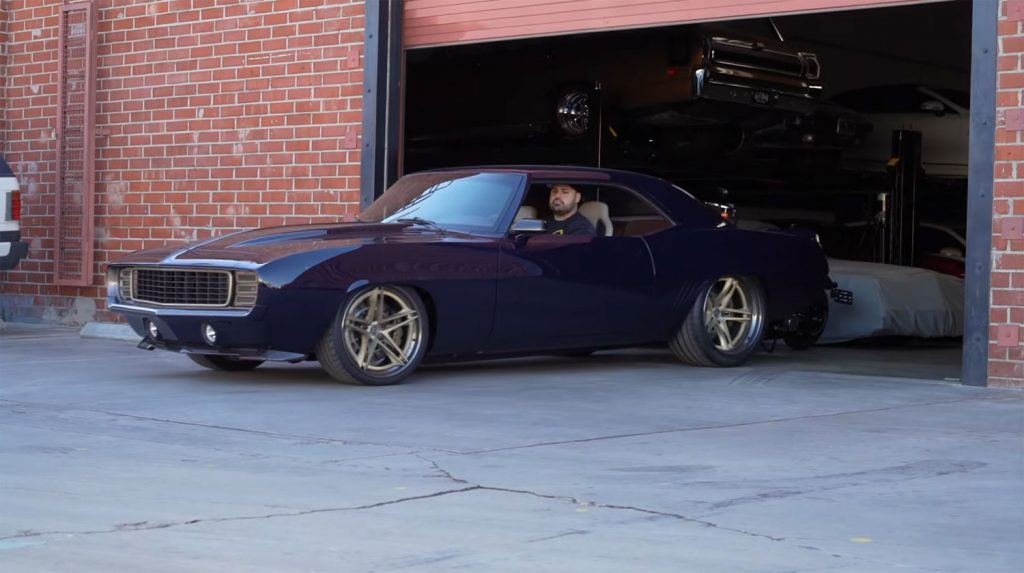 Grimm 7.0 is the work of Jesus Lopez and Gabe’s Street Rod Custom Interiors. This Chevy Camaro is a complete build, top to bottom. It rides on a full Roadster Shop Fast Track chassis. It is powered by a Mercury Racing engine producing 750 naturally aspirated horsepower that seemingly revs to the moon. The interior has hundreds of man-hours in its creation, and cost a small fortune to finish. The deep navy blue finish looks brilliant and wet from every angle. When you look at it, you know it’s a first-generation Chevy Camaro, but you can see it is so much more. 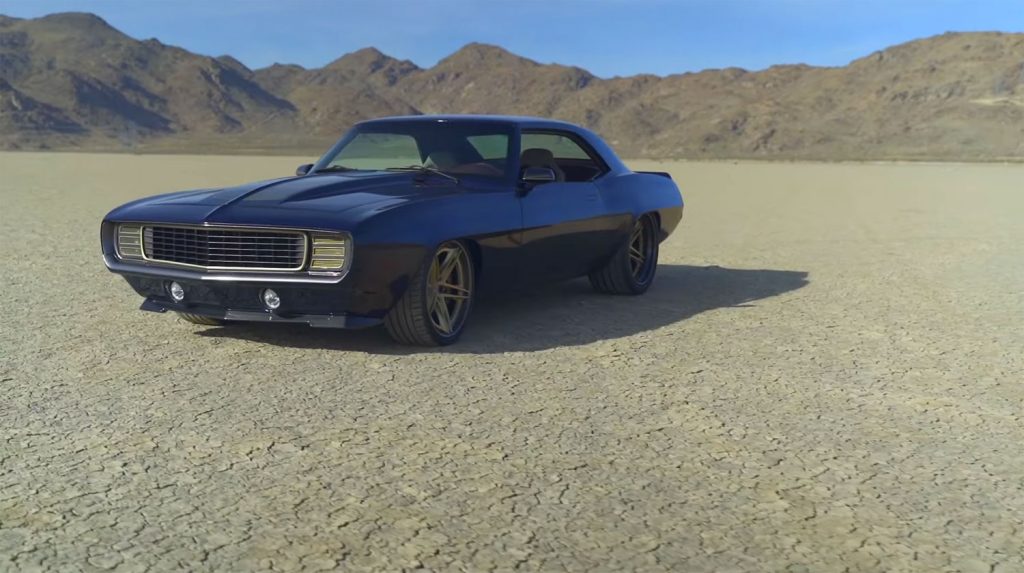 Let’s start at the nose. It looks like a smoother version of a traditional, hidden-headlight, Chevy Camaro RS. The front bumper has been sculpted and blended into the grille opening. The original bumper formed the bottom of the grille opening, but this is much more integrated. The driving lights remain just below the bumper, but have also been smoothed and blended. A shaped carbon fiber chin spoiler has replaced the plastic factory unit, but it looks much more like a splitter. There are carbon fiber parts throughout the car, courtesy of Speedkore. The grille and headlight doors are both painted with gold highlights, a theme that carries throughout Grimm 7.0. 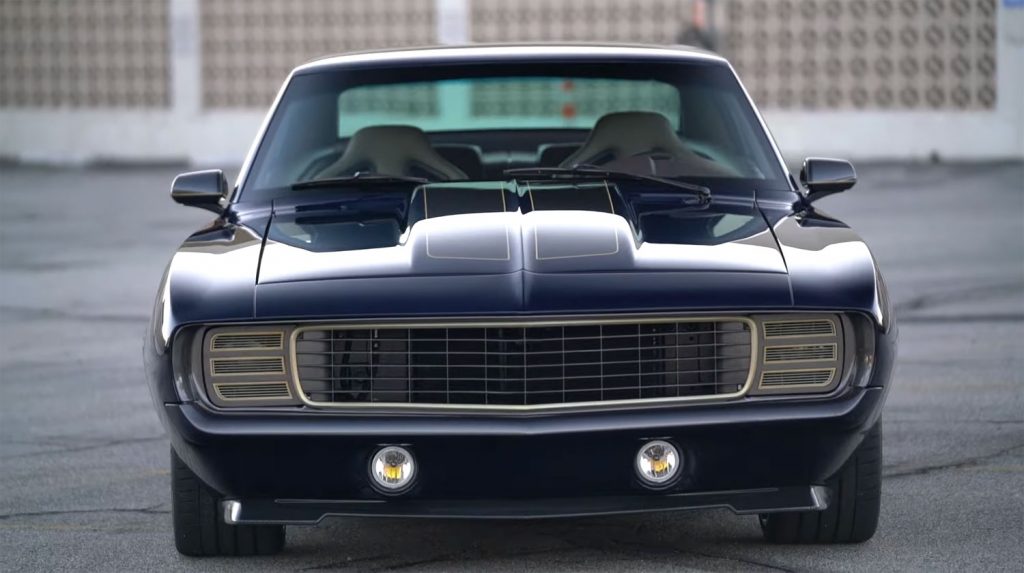 Looking down the side of the car, there is no trim anymore. The traditional Chevy Camaro rocker trim and wheel arch trim are gone, and the ridges have been removed, smoothed. The door handle has been replaced by a flush-retracting unit, sourced from an older Tesla. It was just the right size and shape. When the handle pops out from the door, it casts a light on the ground. Very cool stuff. 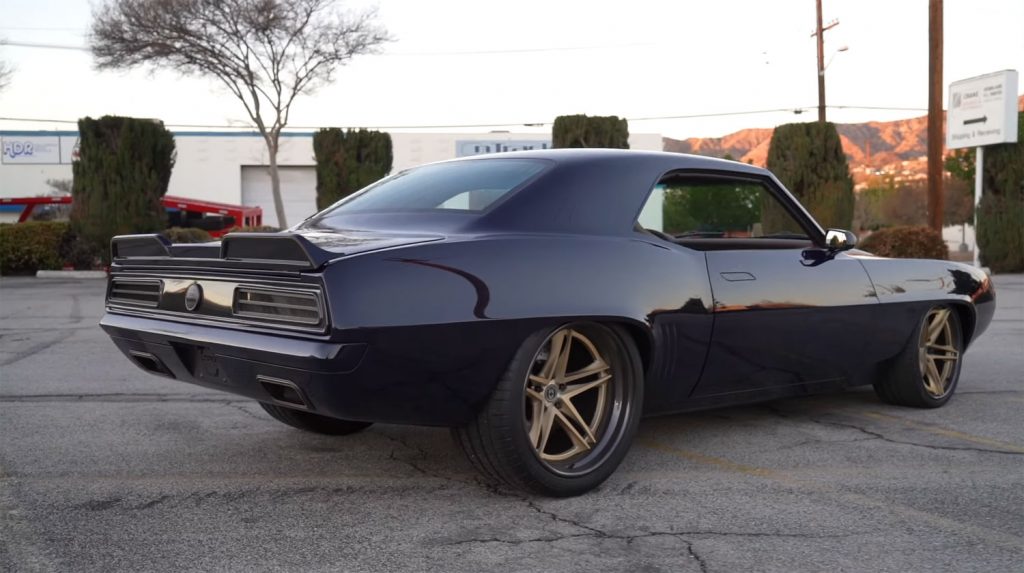 Accent lines above the wheel arches seem to draw the eye more with the trim eliminated. The car sits lower, and looks more aggressive. CNC exterior mirrors are overlaid in carbon fiber. The wheels look massive, with 19-inch HRE S207s in front, and 20-inchers in the back. The wheels are painted the same gold as was found on the grille and headlight doors. Through the wheels, we are treated to a view of huge Baer 6P calipers and discs. 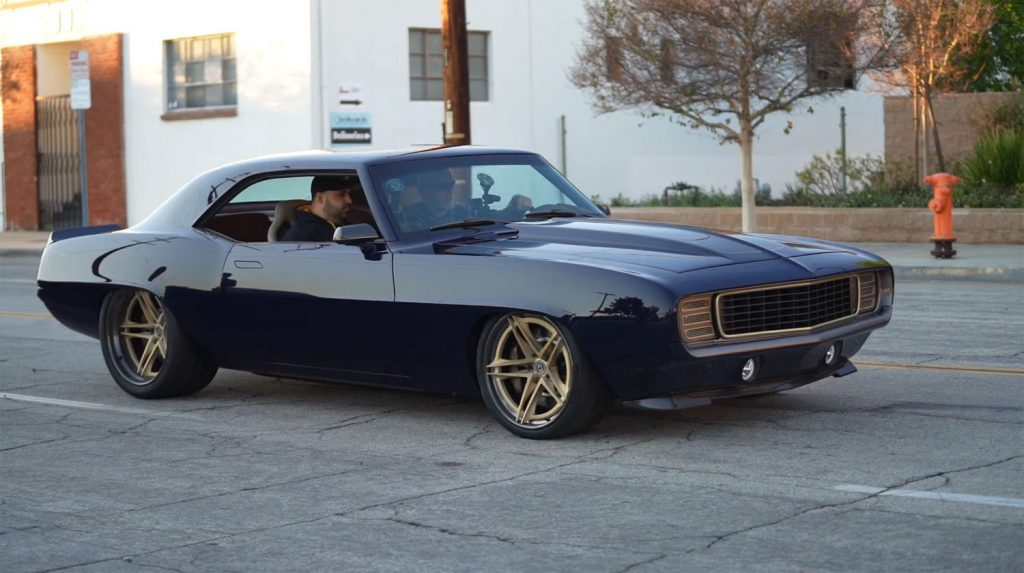 The rear bumper on the Chevy Camaro has been dropped down, shaped, and inset. It blends with the rear valance that rolls under. The exhaust outlets are flush with the valance. It makes for a very cohesive look. The tail light lenses are no longer sectioned, but are bi-sected by an internal horizontal bar. The look is symbiotic with the clean lines of the car. A carbon fiber, “twin fin” spoiler is mounted on the decklid. 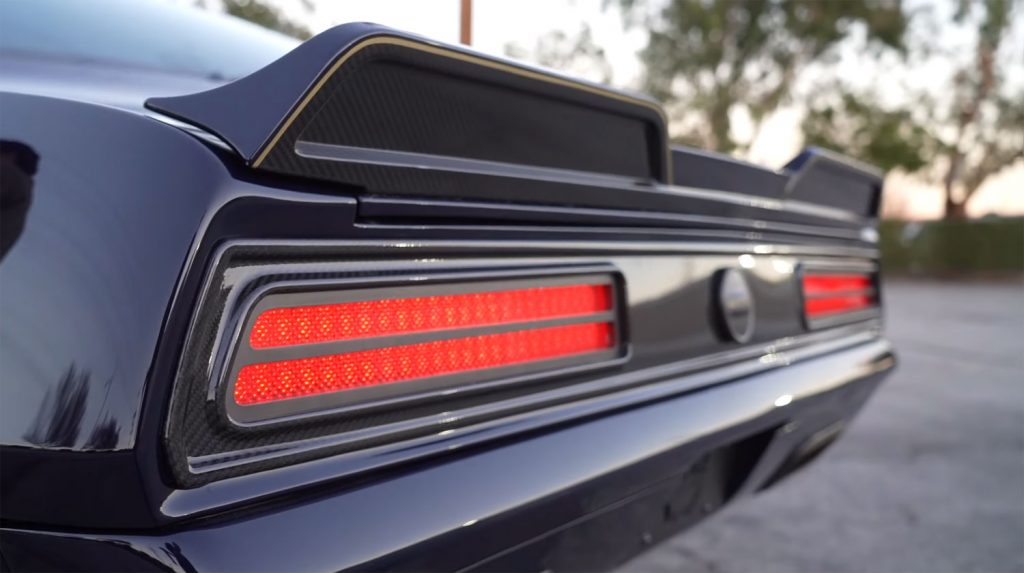 The interior of this Chevy Camaro is jaw-dropping in its detail and finish. Over 400 hours and in excess of $100,000. The dash was custom fabricated from aluminum and leather wrapped. Lamborghini switches reside in the center stack. Leather-wrapped Ferrari California vents feed fresh air to the cabin. Leather-faced Recaro Sportster seats with carbon fiber rear shells have been cut down four-and-a-half inches to clear the roof. The upholstery on the seats is nothing short of artwork, with two-tone leather, contrasting stitching, and shaped detail lines running from the top of the seat backs down and across the seat bottoms. Spark Industries provided the custom steering wheel, which has been milled from billet, leather wrapped, with a carbon fiber insert in rim. 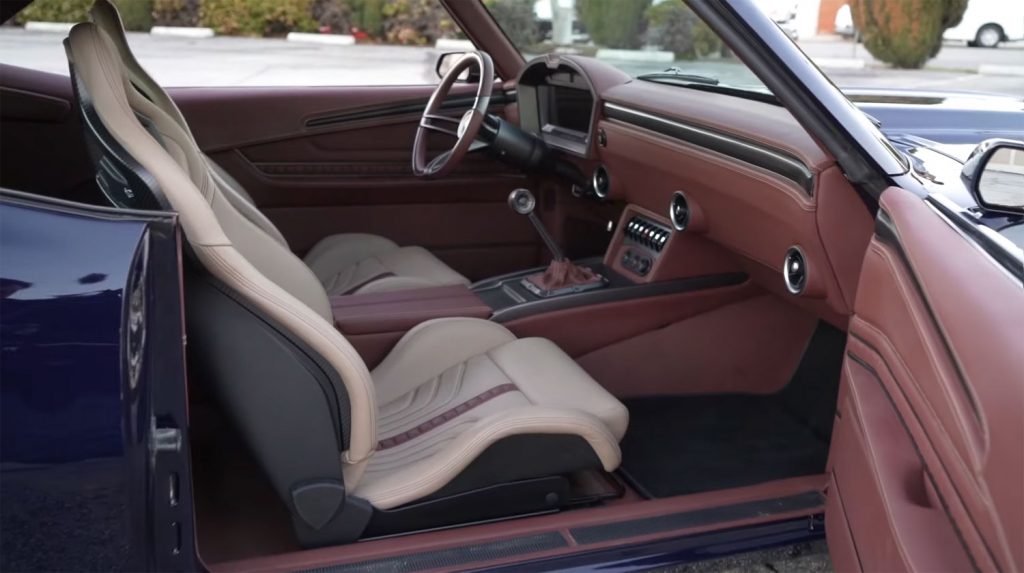 A Mercury Racing SB-4 engine displacing 7.0 liters fills the engine bay. It is topped by an engine cover of blue and bronze. The intake runners have been painted the same shade of gold that highlights the rest of the Chevy Camaro. All wires and hoses have been either tucked away, strategically routed, or lurk behind the carbon fiber cover around the edges of the engine compartment. The sound of this 750-horsepower monster is exotic, almost savage. It doesn’t sound like other Big Blocks. It lives high in the rev range, with a note that rips through the atmosphere. It puts down power through a Tremec six-speed transmission and a Ford 9″ rear end with 3.73 gears. 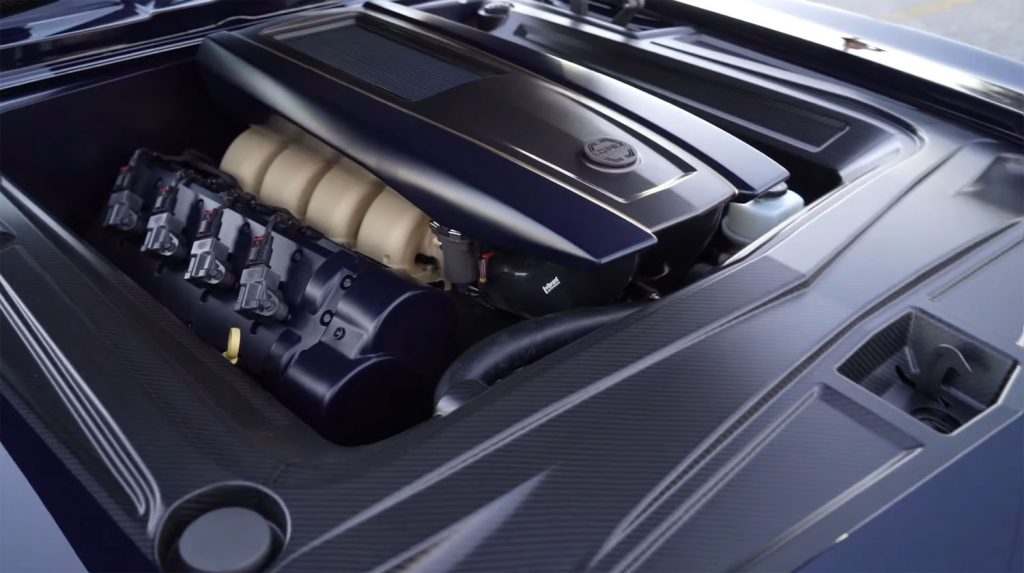 The total build is estimated to have been a $500,000 undertaking (the builder didn’t say exactly how much). You can see this gorgeous beast in action in this video from Autotopia LA. 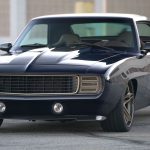 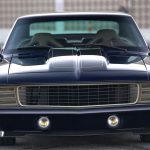 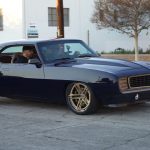 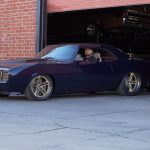 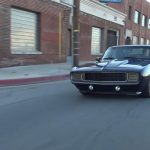 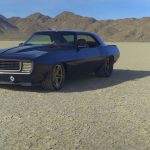 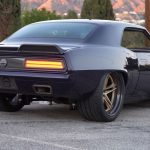 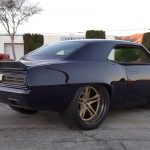 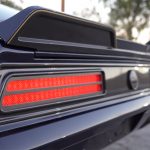 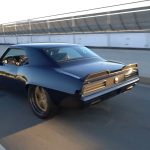 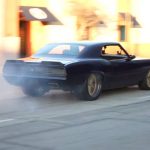 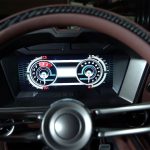 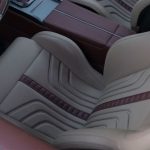 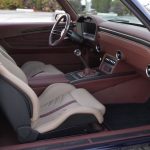 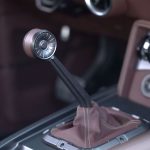 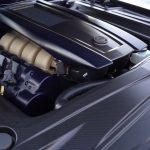