Guy Fieri is well known for his love of American food and his unusual fashion sense, but fans of the presenter and restauranteur may not know that in addition to junk food, Fieri also has a huge passion for cars. Fieri has all sorts of high-priced metal in his collection, but one of his favorite go-to rides for getting from point-A to point-B is his custom GMC Sierra HD Duramax.

Fieri loves the torque his 6.6L L5P V8 turbodiesel Duramax engine produces, but being a true gearhead, the Columbus, Ohio native knows just how much power these turbocharged diesel engines are capable of making. To unlock the full potential of his GMC Sierra HD, he took his truck to Cartronics in Santa Rosa, California, which installed an entire suite of Banks Power parts to increase the output and towing capability of the diesel dually.

Some of the upgrades Cartronics installed in Fieri’s pickup include a Banks Ram Air cold air intake, Banks Derringer ECU (which alone is capable of adding 61 horsepower and 100 pound-feet of torque) and a Banks Monster five-inch exhaust. They also installed a Banks iDash Data Monster for adjusting the various settings of the LML Duramax engine, along with a Banks Pedal Monster throttle response controller. Last but certainly not least was the Banks Ram Air rear differential cover, which draws air in for additional differential cooling when towing. 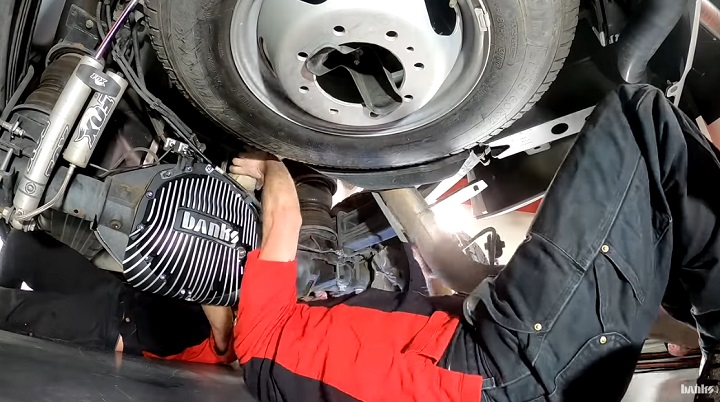 According to Cartronics and Banks, Guy’s GMC Sierra HD gained a total of 98 horsepower “and much quicker throttle response,” thanks to these modifications. The 2018 model year Sierra HD is already good for 445 horsepower and 910 pound-feet when stock, so the chef’s truck is making nearly 550 horsepower and well over 1,000 pound-feet of torque.

Check out the video embedded below to see Guy Fieri get behind the wheel of his freshly modified GMC Sierra HD and take it for a brief test drive.