Sometimes it’s refreshing to see an old-school hot rod. Nothing against the vaunted LS platform that has transformed the custom car building world, mind you. Sometimes you just need to see a vintage Chevy Impala powered by a traditional Small Block making joyous sounds, laying waste to rubber, making great white clouds of tire smoke. If that Chevy Impala happens to be beautifully restored, so much the better. 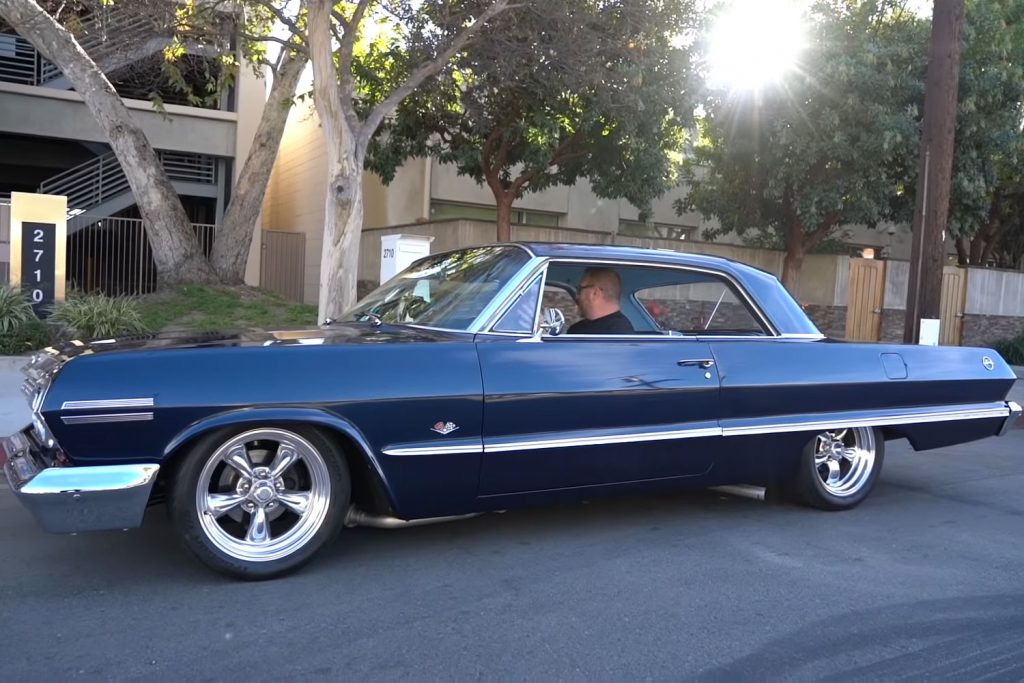 Our featured Chevy Impala is a 1963 vintage two-door. With the windows down, we are treated to the clean look of the pillarless design. The lines of this sled are enhanced by the glossy dark blue metallic paint. The bumpers look to have been re-plated recently. All the exterior brightwork glistens and shines. 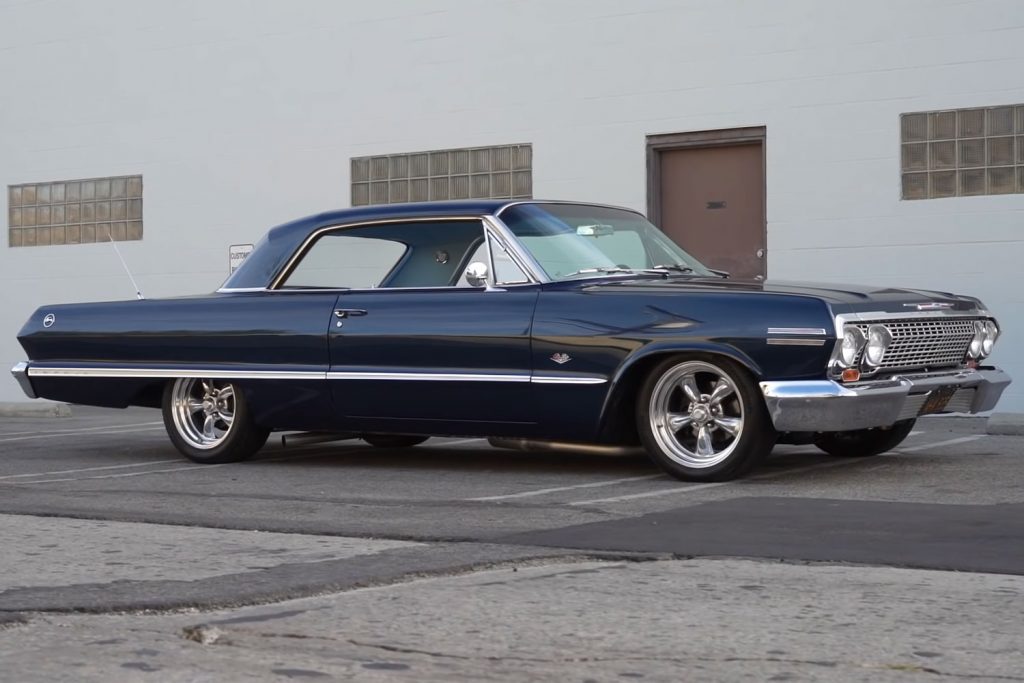 The interior of this Chevy Impala is blissfully, beautifully simple. Done in Bright Blue vinyl, it has bucket seats, and loop-style carpet. It has been converted from a bench seat/column shift car. The stock-style center console is only a half-length unit. The shifter has been moved to the floor, but it wears a color-matched shift boot. The steering wheel is a polished billet unit, but not so garish as to take away from the otherwise stock appearance of the rest of the interior. The trim is all bright and shiny. 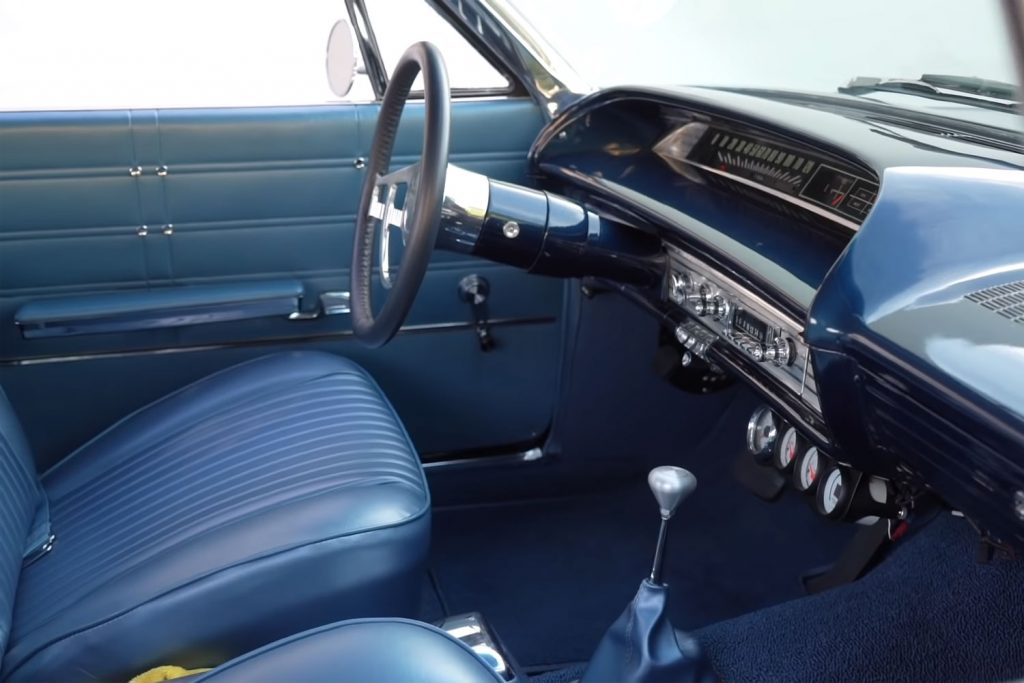 The fairly stock looking engine bay of the Chevy Impala is home to a Small Block that is clearly not stock. The intake, heads, alternator, and headers give it away. The Chevy 350 cubic-inch block is bored .030 over, which makes it a 355 cube mill. It sports a Weiand intake, Edelbrock heads and a flat tappet cam. It makes about 425 horsepower and 425 pound-feet of torque.  Owner Rich says, “We ran it up to 6,000 RPM, but it never really fell over. I don’t want to run it any harder than that. It might have a little more in it, but it’s plenty for what it is. I grew up in the 1980s. If we could make 300, 350 horsepower, it was something big.” 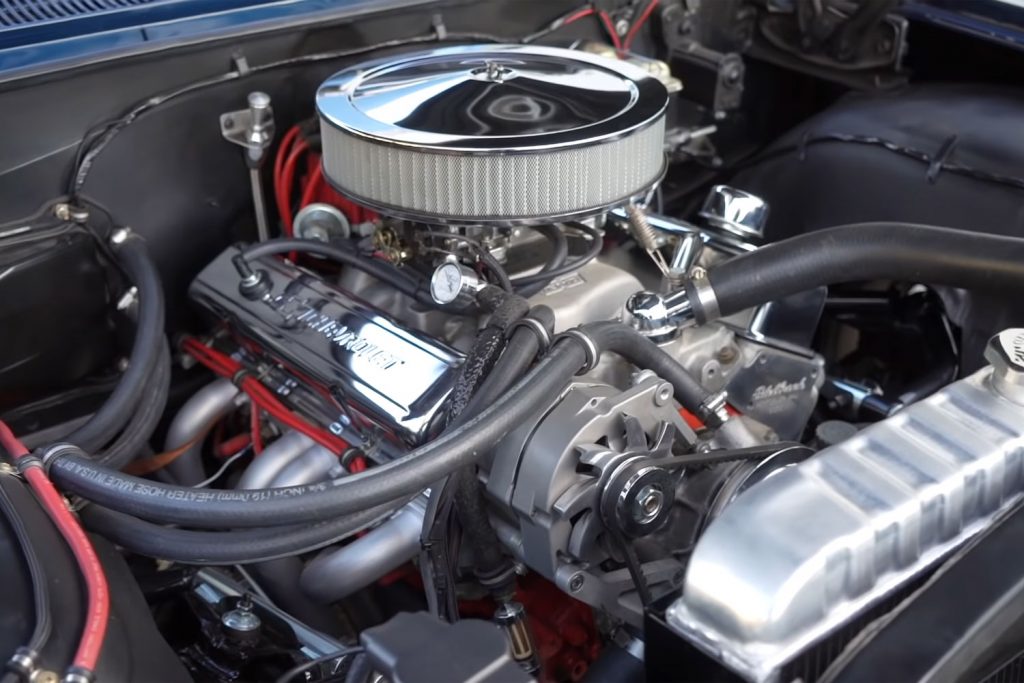 The headers are by Hedman, and feed spent gasses into a 2 1/2″ exhaust that flows into Flowmaster mufflers. The whole affair exits out of either side, just ahead of the rear tires. This does produce an intoxicating note. 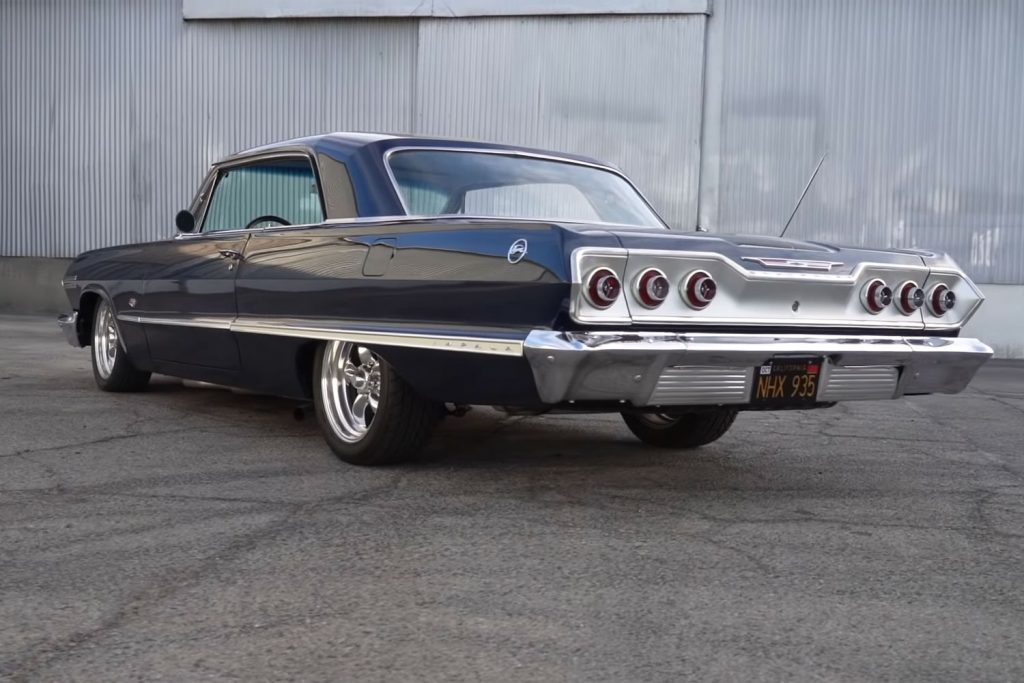 All of that Small Block might is backed up by a more modern 200R4 automatic overdrive transmission. “It digs deep, but I cruise on the highway at 75 mph at 2,500 RPM. You’re not killing the motor, and you can have a conversation with your girl,” said Rich. The 200R4 motivates through a Positraction 3.73 rear gear. 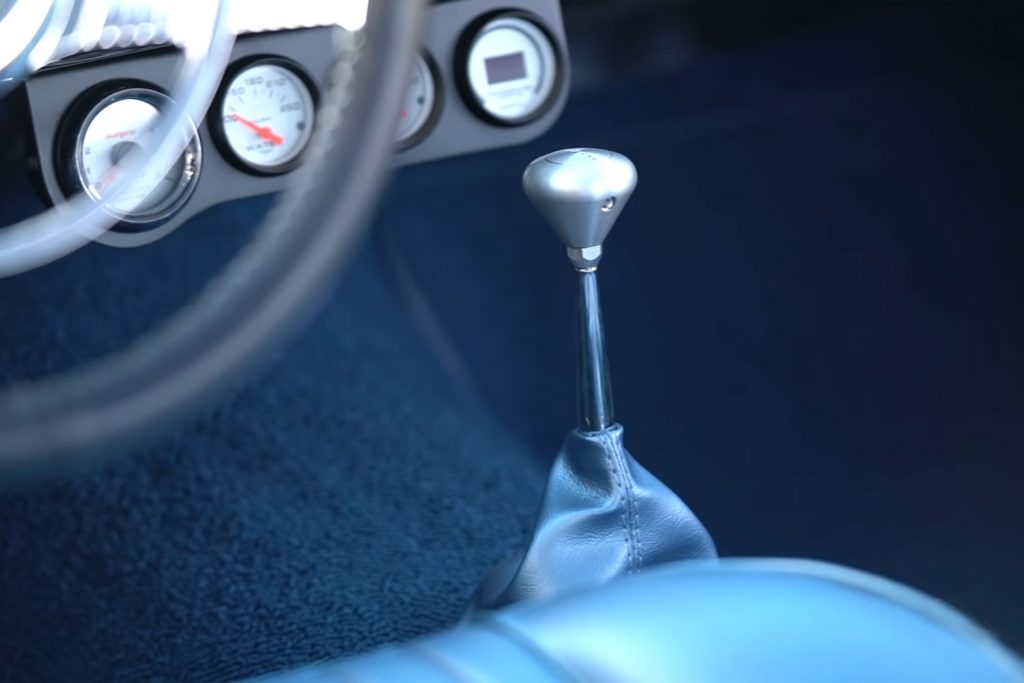 In addition to the fabulous drivetrain in this Chevy Impala, there is a quality suspension from CPP. Upper and lower control arms work in concert with a Viking coil-over conversion setup that cleans up the stock steering. There is also a 500-Series steering box from CPP that “takes all the slop out of the steering.” The whole thing rolls on 17-inch polished two-piece American Racing Torq Thrust II wheels shod in low profile rubber. 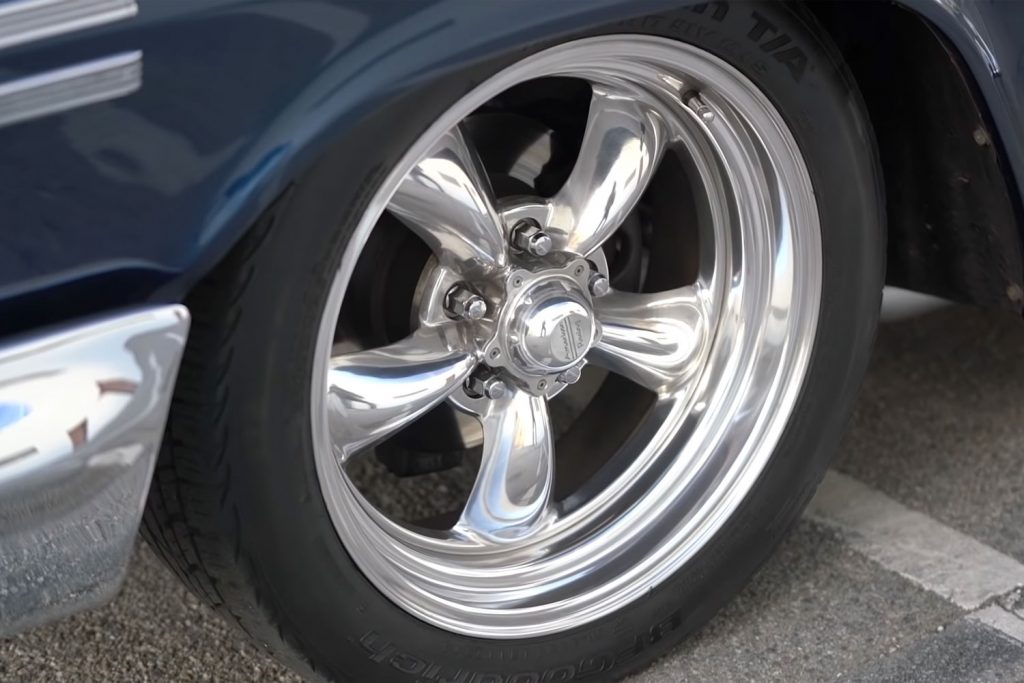 Host Shawn and Rich put down the hood and take the slick ’63 Chevy Impala for the traditional AutotopiaLA test drive. The Impala rolls out of the garage onto sunny streets of Los Angeles. As the guys discuss the car, we are treated to the aural feast of a well-built Small Block being put through its paces. The reflection of the local scenery is shown in the glossy hood paint. The Chevy Impala is a beautiful beast on a budget, perfectly capable of delivering on all its hot rod promises. 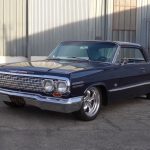 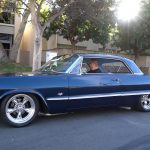 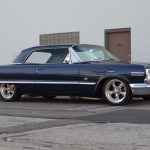 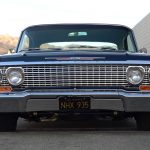 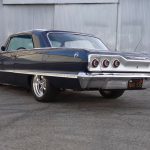 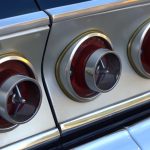 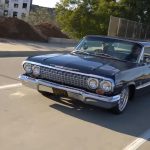 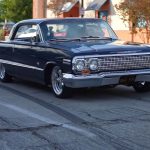 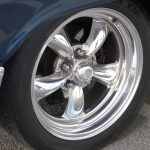 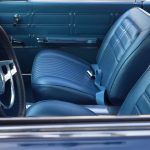 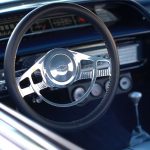 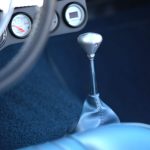 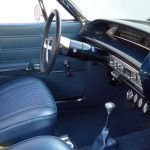 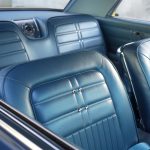 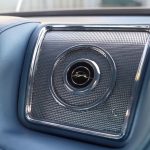 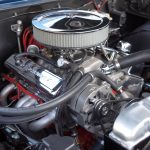