Few things in this world that are meant to roll, do so on three wheels, since three wheels just doesn’t offer the stability of four. This is why the vast majority of passenger cars, trucks, and SUVs come with a wheel at each of their four corners. The least stable proposition is something originally equipped with four wheels driving on three wheels, like the GMC Yukon captured in this video. 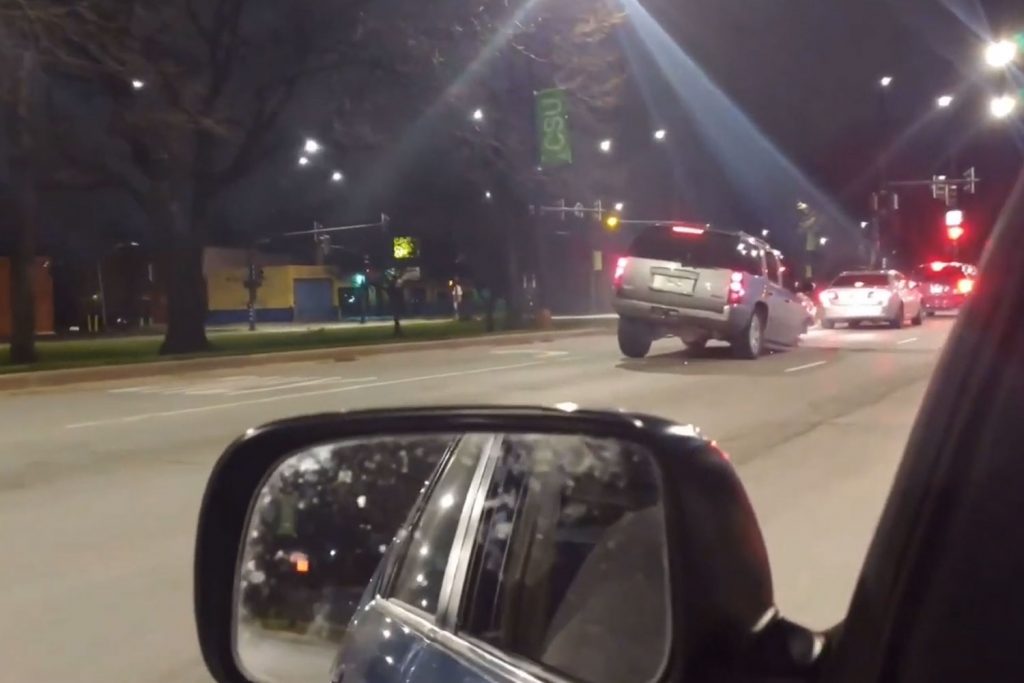 This brief video clip begins with a view from the front driver’s side seat of an unknown car that has pulled to the right side of a city street, capturing its wing mirror in the frame. Nothing much to write home about. Just a second into the clip, a gray, GMT900-era GMC Yukon shoots into frame driving on three wheels, spraying sparks, audibly scraping metal parts to oblivion, courtesy of the missing passenger side front hoop. The license plate is also missing, which may have something to do with why the SUV is being driven and treated the way it is.

As the Yukon passes our filmmaker, the driver accelerates to parallel the wounded SUV, with the camera rolling to catch all the excitement. It seems as though the truck had amassed some speed and is now slowing to stop behind motionless traffic at a light. As it slows, the rear of the truck arches skyward, grounding the running board to oblivion.

Meanwhile, the front passenger corner hops over a slight bump in the road, and the driver’s side rear tire is barely touching the pavement. The light changes, and the GMC Yukon driver tries to pull away as one would normally. No dice.

As the driver guns it, the engine roars and the driver’s side rear tire smokes away as it attempts to overcome the inertia of ground hot metal on unforgiving asphalt.

The Yukon grinds forward, through the intersection, still driving on three wheels, headlights aimed almost straight down at the pavement, bound we know not where. One can only wonder. It looks like an episode of COPS before the cops show up. Without the intervention of the local constabulary, we have no idea why this person is driving on three wheels, what transpired to create the situation, if the driver is chemically altered, wanted by the law, or if there is some emergency afoot that would justify such reckless behavior.

The clip ends rather abruptly 26 seconds in with even more sparks flying from the presumably destroyed undercarriage of the poor GMC Yukon, and the assumption the driver won’t stop until something more critical than a MISSING WHEEL ends this escapade.