Retro Manufacturing of Henderson, Nevada, has introduced two new RetroSound Apache radios for GM trucks built in the 1950s. One is designed specifically to fit the ’54 Chevrolet Advance Design truck, while the other is suitable for ’55 to ’58 Chevrolet Task Force and ’55 to ’59 GMC Blue Chip Series trucks.

The “retro” part of the RetroSound Apache name applies entirely to the look and not at all to the sound of these radios; indeed, Retro Manufacturing claims that these are the most technically advanced radios ever made for the vehicles.

The RetroSound Apache Hermosa set includes all of the above plus built-in Bluetooth for hands-free phone operation and wireless streaming, a 32,000-color LCD display, a rear-mounted USB port, an extra auxiliary input and two sets of RCA low-level outputs.

The Chevrolet Advance Design truck was sold from the 1947 to 1955 model years. The only major change took place in 1954, when Chevy fitted a one-piece windshield and revised the steering wheel and dashboard. Other styling alterations included horizontal cargo bed rails, round tail lights and a crossbar design for the front grille. A 235ci (3.9L) straight-six engine replaced the previous 216ci (3.5L) unit, and the Hydramatic automatic transmission became an option for the first time. 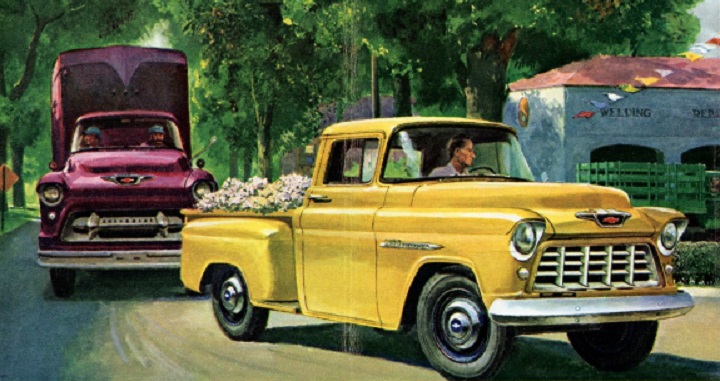 The Chevrolet Task Force (pictured) replaced the Advance Design series and was in turn succeeded by the C/K Series. It was fitted with the first-generation Chevy Small Block, and was the first Chevrolet powered by a V8 engine since the Series D of 1918. The GMC Blue Chip was mechanically similar to the Task Force, but had a more aggressive front-end design.

Whether you’re interested in new vehicles or classics (or indeed both), subscribe to GM Authority for more Chevrolet news, GMC news, and around-the-clock GM news coverage.