Automatic stop-start technology is equipped in roughly 70 percent of all General Motors vehicles that were sold in the United States in 2019.

In its 2019 Sustainability Report, GM claimed that over 70 percent of its sales volume in the United States contained stop-start technology. Automatic start-stop enables the vehicle to automatically switch off its engine when the vehicle comes to a stop (ie. at a stop light or stop sign) and switch it back on when the driver takes their foot off of the brake pedal, improving fuel economy and reducing greenhouse gas emissions.

“These engines provide a fuel economy benefit of between approximately 3 to 5 percent, significantly decreasing CO2 emissions for consumers who face extended idle times,” the automaker said in the sustainability report. “In the U.S., to date, stop-start engine technology has saved GM customers 293 million gallons of fuel and 2.61 million metric tons of CO2 emissions over the lifetime operation of their vehicles.” 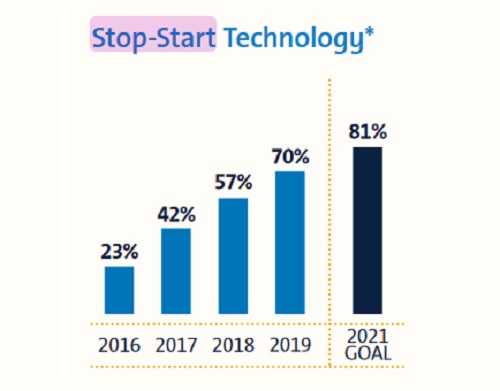 While GM is in the midst of transitioning to an all-electric future, it believes that improving the efficiency of its internal combustion engine vehicles in the meantime is still extremely important.

“As we move closer to our vision of an all-electric portfolio, we also are committed in the nearer term to improving the efficiency of vehicles that rely on the internal combustion engine,” the automaker said. “Continual improvements in vehicle engine and transmission efficiency, as well as vehicle weight, are helping us to eliminate excess material use in manufacturing, while reducing fuel use and costs for customers.”

Some vehicles that offer standard automatic stop-start technology come with a defeat switch from the factory. The automatic stop-start toggle button has the letter ‘A’ on it surrounded by a directional arrow. In most cases, the user will have to press this button to turn the system back off every time they get back in the car.

Automatic stop-start won’t work in all scenarios, either. For example, if the vehicle’s air conditioning or heat settings require the engine to be turned on to heat or cool the cabin, the system will not activate. It may also not activate if the engine/transmission is too cold or the outside ambient temperature is very low.