The GMC Hummer EV pickup will enter production in 2021 and General Motors has already confirmed that an electric Chevy pickup is set to launch sometime between now and 2025. For now, though, GM fans who want a battery-powered truck are out of luck. Or are they?

Twitter user @Draagspeed spotted this homemade Chevy Bolt EV pickup truck in California recently and decided to snap a few pictures of it to share with his followers. We really wouldn’t blame anyone for stopping to get a better look at this odd creation, as it’s probably the only stake bed Chevy Bolt EV in existence.

We have absolutely no backstory to go off of for this battery-powered home brew pickup, but it appears as though everything from the b-pillar backward is custom. The custom sheet metal looks a bit wavy and uneven, but we have to give some props to the builder for managing to mimic the Bolt’s waistline crease, along with the more complex styling lines at the bottom of the doors and body. 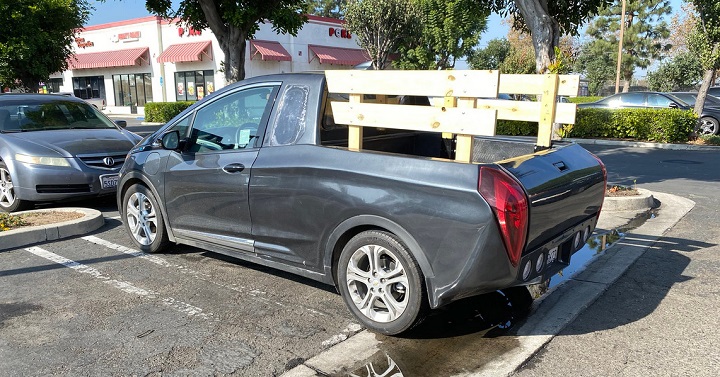 It also looks as though the builder repurposed the Bolt’s factory tail lights, tilting them 90-degrees so they fit on either side of the custom tailgate. The aftermarket lights embedded in the rear bumper look as though they were installed a bit more hastily than the taillights and appear to serve as the reverse lights.

While it’s true that this Chevy Bolt EV pickup wouldn’t be good for hauling longer items or extremely heavy objects, we could see it being a decent vehicle for hauling bricks, rocks or dirt, which could make it a handy little vehicle to have around when doing yard work or home renovations. And with a zippy electric powertrain, it would definitely be more fun to drive than a rented U-Haul truck!