Without a doubt, the custom C50 Crew Cab Chevy flatbed you see before you is an absolute showstopper, wowing crowds at SEMA with its unique style and impressive build quality. Dubbed Nighttrain, this ’68 C50 was created by CTP Concepts, a shop out of Gardnerville, Nevada, that specializes in Bow Tie brand pickups. We recently spoke with CTP Concepts boss Travis Pruis, who gave us the inside scoop on everything that went into Nighttrain’s creation. 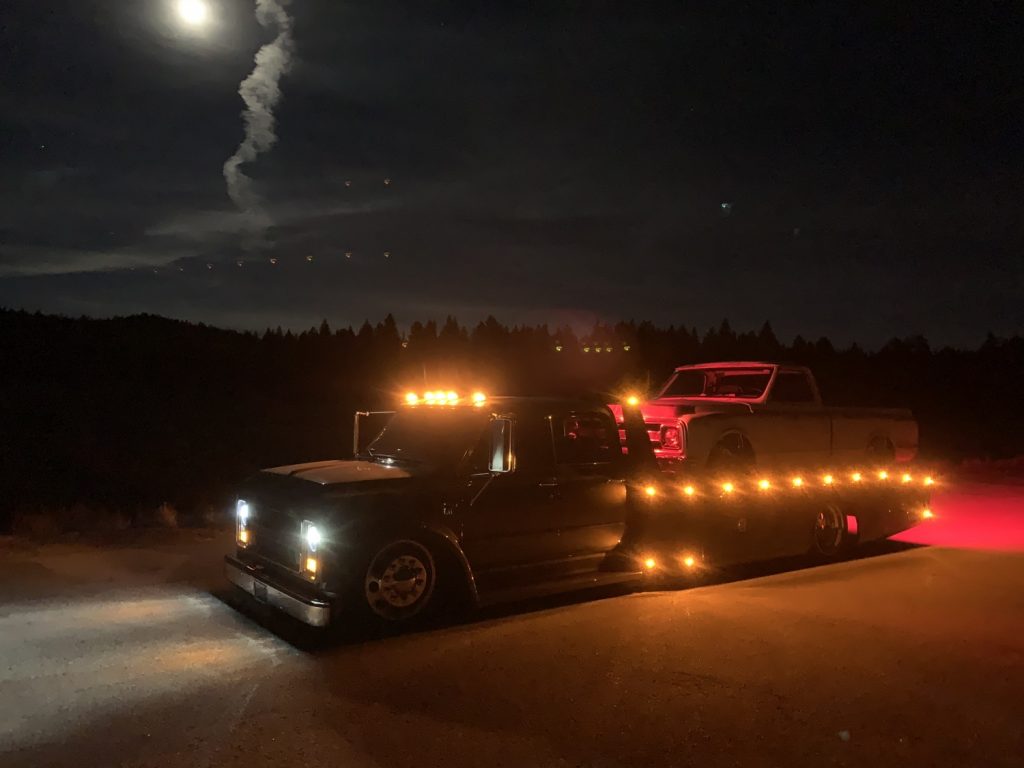 Funny enough, Pruis says that the custom C50 Chevy flatbed project started as a joke. He had a C50 in hand, and although it looked pretty rough, it ran and drove, leading Pruis to consider fixing it up as a shop truck. However, after rendering it as a custom lowered cruiser, it began to evolve into a full-fledged SEMA build. 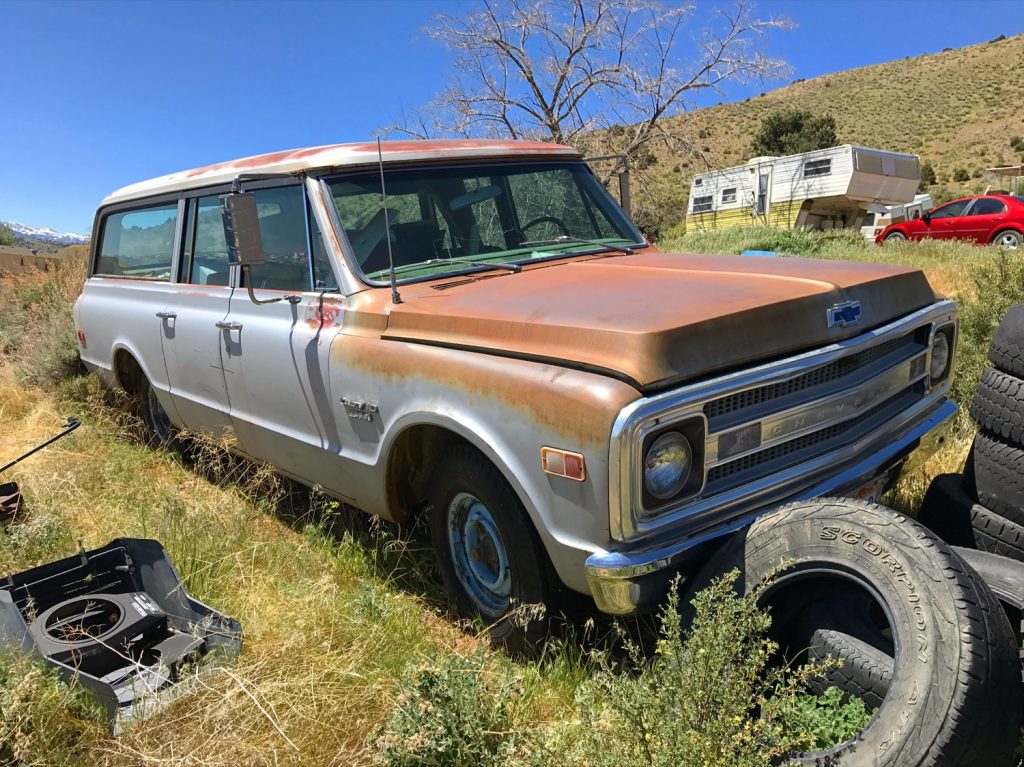 At the urging of his wife, Pruis decided to go big, sourcing a classic Suburban body to graft onto the ’68 Chevy flatbed. He ended up finding an all-original, numbers-matching example from 1970, which looked ripe for a project all by itself. The SEMA crunch, however, had other plans.

“I felt a little bit bad about cutting that one in half,” Pruis tells GM Authority. Nevertheless, Pruis had his cab. Now it was just a matter of mating it to the Chevy flatbed. 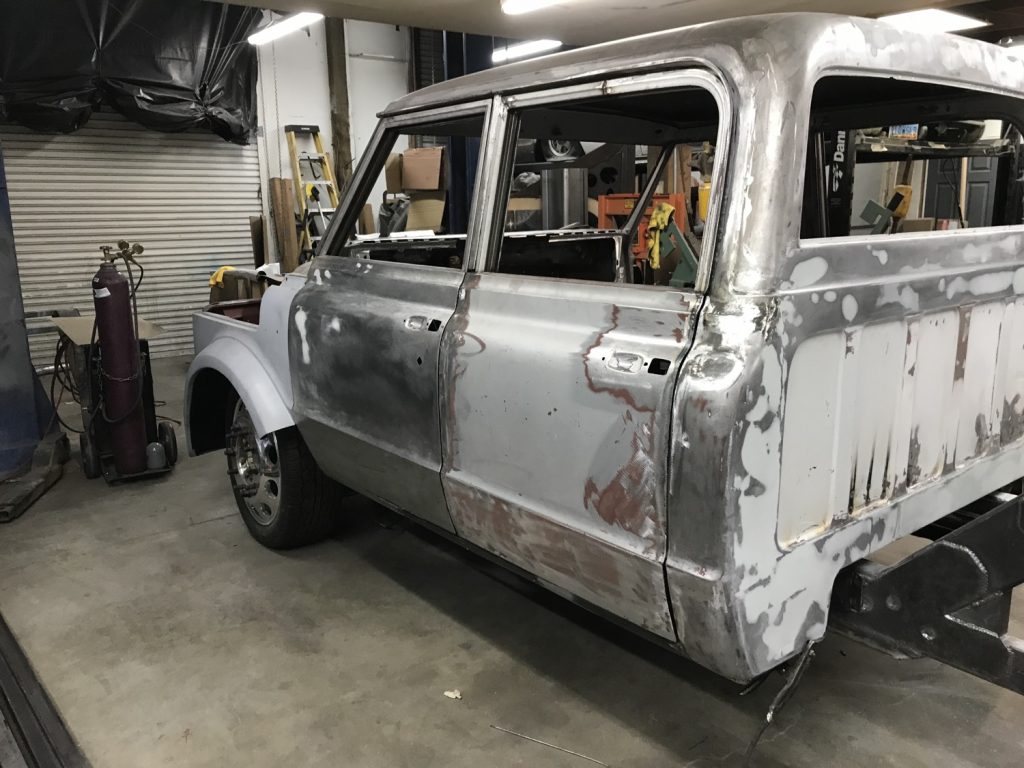 CTP Concepts came up with countless tricks to make it all fit as imagined. For example, Pruis wanted to keep the roof tall for that big truck feel. “I kept the crown that the Suburbans have and actually raised the whole back wall an inch and a half to match up.” 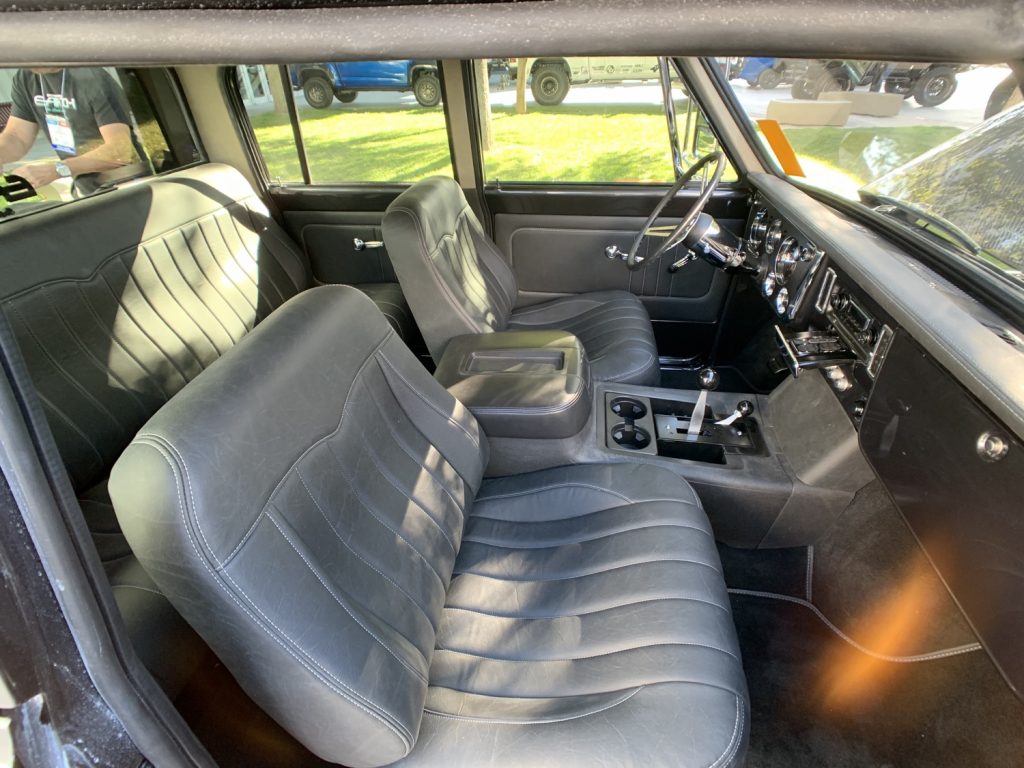 Another example is in the cabin, where the mount for the radio was narrowed to fit the A/C vents, all in the name of symmetry. “It’s little stuff like that I like doing on these things to make it look like Chevrolet would have done it,” Pruis tells GM Authority. 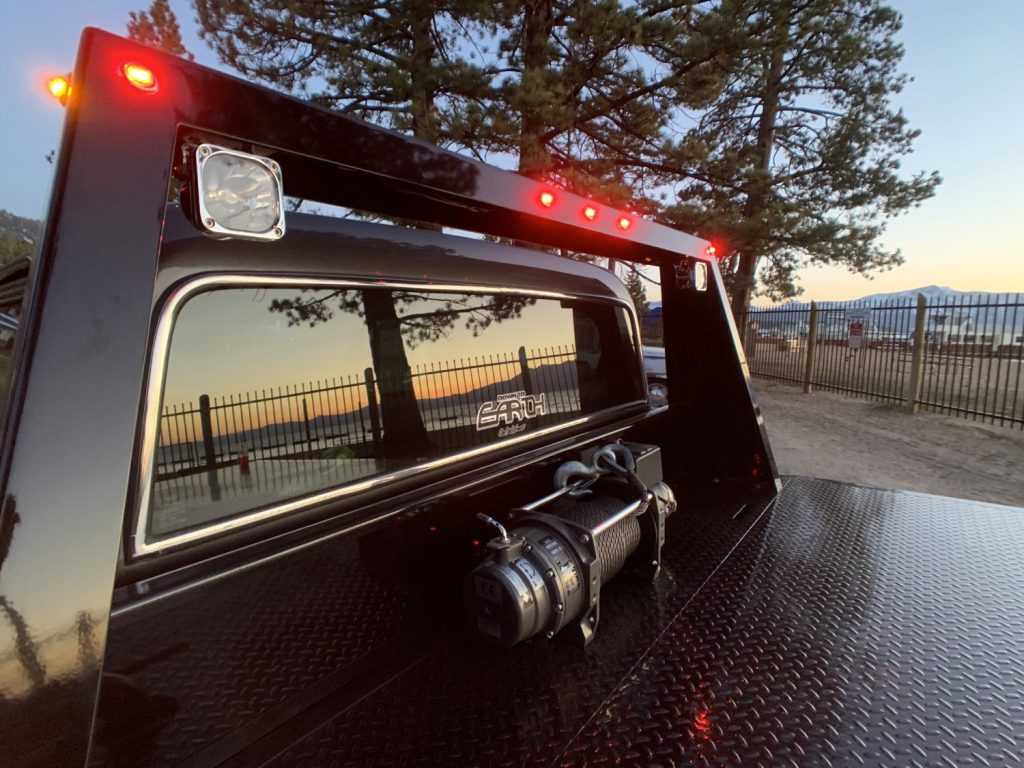 Looking over the final product, it’s hard to imagine this Chevy flatbed as anything other than a crew cab, thanks to the factory-quality fit and finish.

“It hurts you in a sense too because when you do do it like that people overlook it,” Pruis explains. 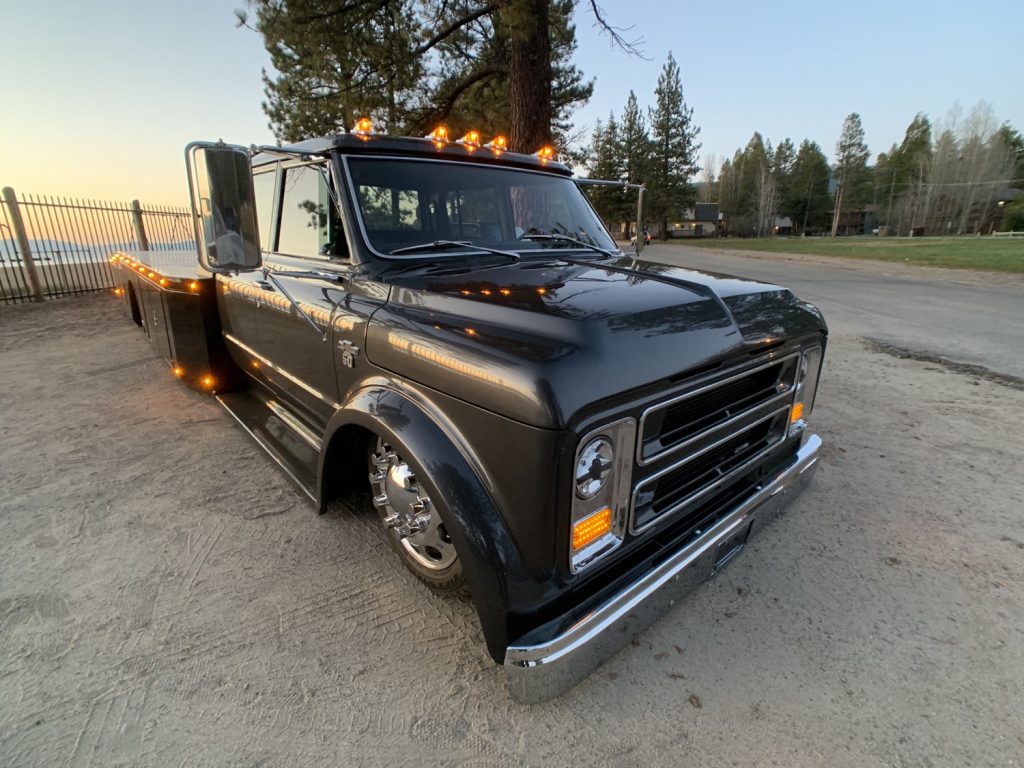 Indeed, a project like this tends to take on a life of its own, evolving over time to overcome obstacles while still remaining true to the original idea and rendering.

“You’re always trying to stay ahead of what problems you see,” Pruis tells GM Authority. But the results speak for themselves, as does the huge reaction that the Chevy flatbed generated at SEMA. 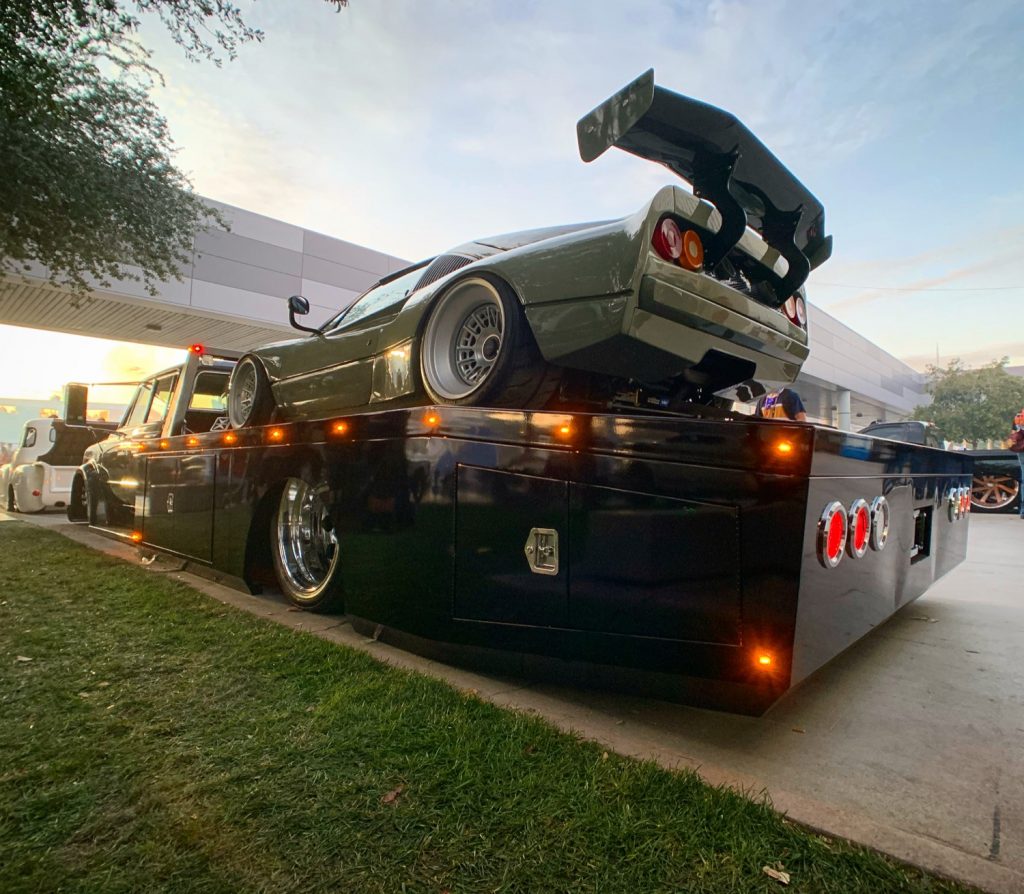 “Insane,” Pruis tells GM Authority. “Every time you go on YouTube, you’re like, ‘oh, a thumbnail of the truck.’ Crazy. Very humbling.”

Pruis says that most people gravitate to the sheer size of the truck and how low it is.

“It’s definitely cool to build something that is different from everybody else. That’s probably one of the hardest things to do at SEMA.”

Check out our full gallery of Nighttrain images below, and stay tuned for more content on this wild custom C50 Chevy flatbed in the near future. In the meantime, subscribe to GM Authority for more Chevrolet news and ongoing GM news coverage.

CTP Concepts would like acknowledge the following sponsors who helped with the Nighttrain C50 build: