General Motors has teamed up with a number of different celebrities to promote the new 2021 Cadillac Escalade. First, the automaker enlisted the help of Oscar-winning actress Regina King to help introduce the new luxury SUV, then it tapped James Blake to promote the vehicle alongside his new EP, ‘Before.’ Now the automaker is turning to hip hop community to promote the 2021 Cadillac Escalade, hiring rapper Killer Mike of Run the Jewels to appear in a short 60-minute online advertisement for it. 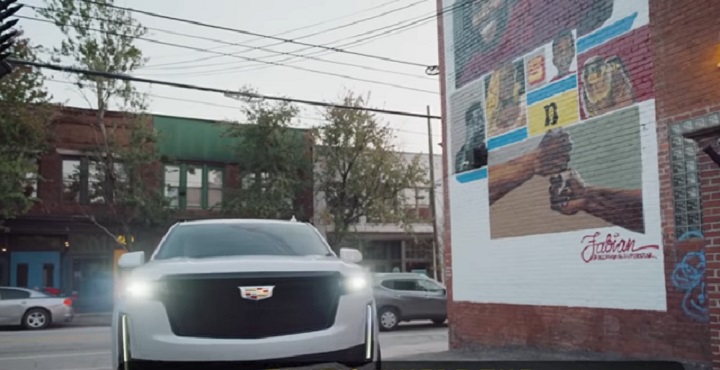 The advertisement is part of Cadillac’s new #NeverStopArriving series and follows Killer Mike as he goes to visit a mural that a local Atlanta street artist painted of him. The rapper, whose real name is Michael Render, is well-known in the Atlanta area not only for his music, but for his activism and community outreach efforts, as well.

“I’m from collier heights in Adamsville,” Render says in the voiceover for the 60-second spot. “This neighborhood was planned for and by African Americans and they solidified their business in the Edgewood corridor generations before us, and they understood that the acorn they planted would soon be an oak tree.”

“Atlanta gave me absolute confidence and it’s my job to serve the greater good for this community,” Render also says in the ad. “The most effective thing you can do is organize locally. That’s where the real investment is, in your neighbor. Hope is local. I have accepted that I am a leader, but do I think I’ve arrived? There is no arriving, just constantly setting new goals. Nothing is impossible.”

This isn’t the first time Cadillac has shown an interest in Killer Mike and Run the Jewels. The hip hop duo’s song with DJ Shadow, “Nobody Speak” is used as the background music for a number of different Cadillac ads, including the aforementioned Regina King advertisement, among others.

The 2021 Cadillac Escalade is produced at the GM Arlington Assembly plant in Texas. Pricing starts at $76,195 for the entry-level Luxury trim level, while the extended-wheelbase ESV model is priced from $80,490.

Check out the Killer Mike advertisement for the 2021 Cadillac Escalade embedded below.