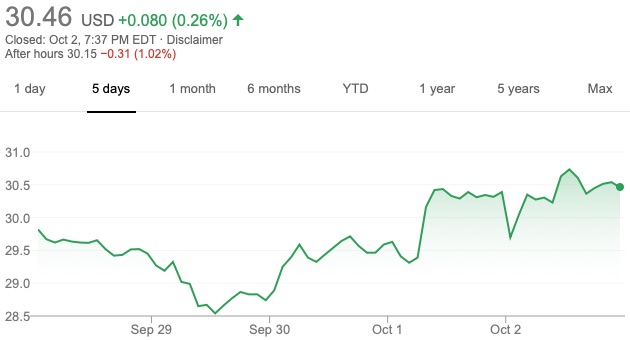 By comparison, shares of GM’s cross-town rival, the Ford Motor Company, rose $0.38 per share, or nearly 6 percent, during the September 28th, 2020 to October 2nd, 2020 timeframe. It’s worth mentioning the fact that The Blue Oval recorded a better U.S. sales performance during Q3 2020, beating out all three fellow domestic automakers: GM, FCA, and Tesla.

Other notable developments include an agreement to repay $28M in state tax incentives as well as a renegotiation of the Nikola Motor Company deal, wherein The General would get an increased stake in the electric pickup truck startup.

Beyond that, the momentum generated a few weeks ago seems to have fizzled out. At the time, GM stock saw a significant jump in value following the announcement of its aforementioned strategic partnership with Nikola. However, Nikola Motor Company shares fell following claims that company founder, Trevor Milton, overstated the startup’s tech capabilities. Then, Nikola shares slid even further after a report published by Hindenberg Research accused the electric truck startup of being an “intricate fraud.”

Mr. Milton has since stepped down and the Securities and Exchange Commission and U.S. Department of Justice have begun their investigations. Currently, Nikola stock is valued at $24.25 per share, after reaching $50.05 on September 8th and falling to $17.88 on September 29th.

As we reported, The General recently provided a Q3 2020 economic and industry update following the release of its U.S. sales performance for the third quarter. Notably, all four GM brands in the U.S. (Buick, Cadillac, Chevrolet, GMC) saw sales declines, as did the rest of the industry. Large pickups, however, showed strength with heavy-duty year-over-year growth, while sales improved sequentially each month within the quarter, including a significant rebound in September with a year-over-year sales increase. All-new crossover models also gained sales momentum.

The Cadillac Lyriq show vehicle was unveiled in August.

Investors should also note some more recent news, including GM CFO Dhivya Suryadevara’s recent resignation to join a financial startup company called Stripe and GM’s future EV product plans for the Chinese market. Also, GM issued a stop sale order on six models such as the 2020 Corvette as well as a Technical Service Bulletin to address faulty valve spring in many V8 engines. Meanwhile, a fire broke out at the American Axle plant in Ohio, which is a significant component supplier for General Motors.