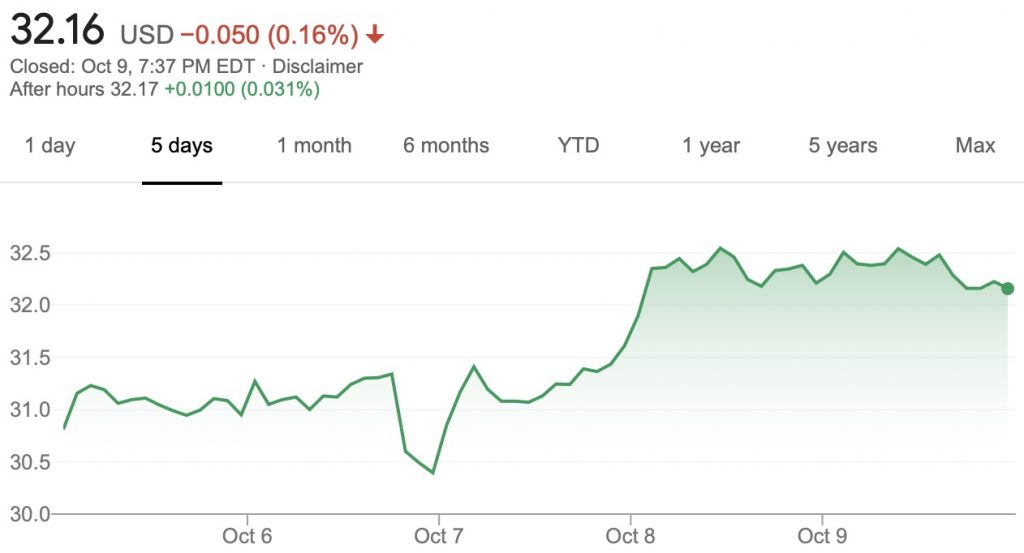 By comparison, shares of GM’s cross-town rival, the Ford Motor Company, rose $0.36 per share, or over 5 percent, during the October 5th, 2020 to October 9th, 2020 timeframe. It’s worth mentioning the fact that The Blue Oval recorded a better U.S. sales performance during Q3 2020, beating out all three fellow domestic automakers: GM, FCA, and Tesla.

Recent developments that may be influencing the value of GM stock include General Motors Ventures’ new interest in Envisics, a U.K.-based startup developing augmented reality (AR) technology for automotive applications. GM believes the tech may find a place in the automaker’s up-and-coming all-electric vehicle models, such as the Cadillac Lyriq crossover.

Additionally, GM has resumed construction at the site of its Canada McLaughlin Advanced Technology Track in Oshawa, Ontario after it was forced to postpone the project due to the COVID-19 pandemic. Rather conversely, the automaker will put C8 Corvette and Corvette Convertible production on pause next week due to supplier constraints.

Last week, we reported on GM’s agreement to repay $28M in state tax incentives as well as a renegotiation of the Nikola Motor Company deal, wherein The General would get an increased stake in the electric pickup truck startup. GM is leaning into its strategic partnership with Nikola in the face of the electric truck startup’s controversy. As reported, Nikola Motor Company shares fell following claims that company founder, Trevor Milton, overstated the startup’s tech capabilities. Mr. Milton has since stepped down and the Securities and Exchange Commission and U.S. Department of Justice have begun their investigations. Currently, Nikola stock is valued at $24.66 per share, after reaching $50.05 on September 8th and falling to $17.88 on September 29th.

That said, there are still some good things happening for GM in 2020, including a 27 percent growth in Silverado sales during Q1 2020, market share gains and production increases for the Silverado and the Sierra during Q2 2020 as well as strong Chevrolet Blazer sales and Chevrolet Trailblazer sales. Notably, GMC Sierra inventory is extremely low as the automaker can’t build enough of them to meet strong demand. Most of GM’s range of redesigned full-size SUVs are now in stock on dealer lots, which includes the 2021 Chevrolet Tahoe and 2021 Suburban as well as the 2021 GMC Yukon and 2021 Yukon XL. Notably, regular production (SORP) for the 2021 Yukon diesel is set to kick off November 16th.