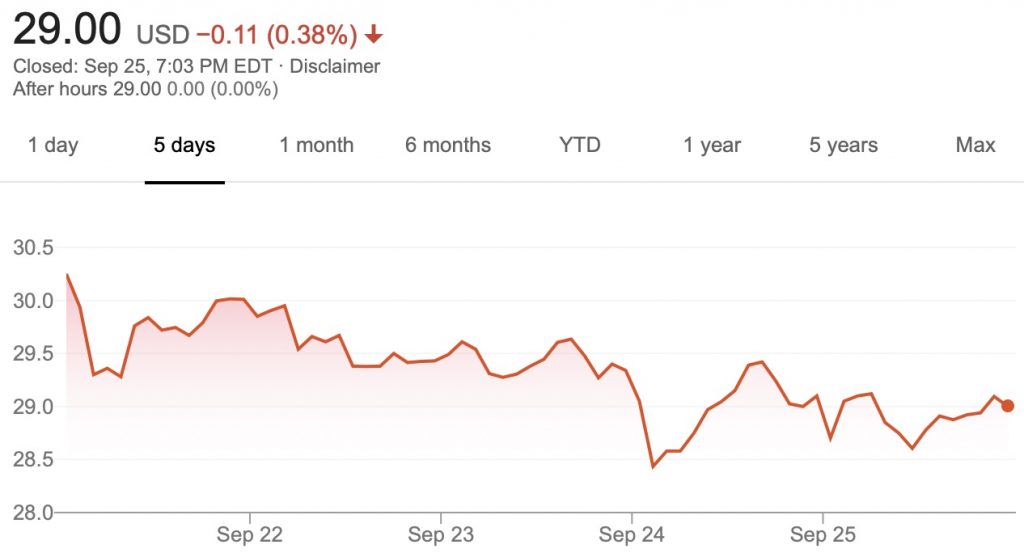 By comparison, shares of GM’s cross-town rival, the Ford Motor Company, fell $0.72 per share, or nearly 10 percent, during the September 21st, 2020 to September 25th, 2020 timeframe. According to a Business Insider report, Bank of America said U.S. stocks had suffered their third-largest outflow of funds, with investors pulling $25.8 billion out of equities in the past week. It’s also worth noting the fact that reports have indicated restrictions in many U.S. areas are being lifted despite a surge in multiple states, including Idaho and Utah.

Beyond that, the momentum generated two weeks ago seems to have fizzled out. At the time, GM stock saw a significant jump in value following the announcement of its new, strategic partnership with electric truck startup Nikola. However, Nikola Motor Company shares fell following claims that company founder, Trevor Milton, overstated the startup’s tech capabilities. Then, Nikola shares slid even further after a report published by Hindenberg Research accused the electric truck startup of being an “intricate fraud.”

Mr. Milton has since stepped down as the Securities and Exchange Commission and U.S. Department of Justice begins their investigations. Currently, Nikola stock is valued at $19.46 per share, after reaching $50.05 on September 8th and falling to $32.13 on September 11th.

Currently, it seems some investors are banking on the expectation of a significant boost to stock prices following a spin-off for GM electric vehicle business. Notably, General Motors is working hard to introduce 20 new EV models by 2023. It’s also worth pointing out that the same can also be said for Ford, and such a trend would undoubtedly benefit another competitor as well, Tesla. More recently, the announcement of the GM-Honda alliance may also be of great significance to investors.

Investors should also note some more recent news, including GM CFO Dhivya Suryadevara’s recent resignation to join a financial startup company called Stripe and GM’s future EV product plans for the Chinese market. This past week, GM issued a stop sale order on six models such as the 2020 Corvette as well as a Technical Service Bulletin to address faulty valve spring in many V8 engines. Meanwhile, a fire broke out at the American Axle plant in Ohio, which is a significant component supplier for General Motors.

The GMC Hummer EV will be officially unveiled on October 20th.

Additionally, the refresh of many 2021 models will be delayed, including the Cadillac XT4, Chevrolet Traverse, Chevrolet Equinox, GMC Terrain, and Chevrolet Bolt EV. In fact, the overall roll-out plan for most GM products has been pushed back, which also includes the launch of the Cadillac CT4-V Blackwing and CT5-V Blackwing models. However, the GMC Hummer EV’s will be revealed on October 20th.