General Motors reintroduced the Chevy Trailblazer nameplate for the 2021 model year as an all-new small crossover for select markets. The latest Trailblazer slots in between the Chevy Trax and Chevy Equinox with regard to the Bow Tie brand’s crossover portfolio, creating unique positioning in one of the most competitive segments in the industry. To get a better under standing of how the new Chevy Trailblazer and Chevy Trax fit into GM’s crossover strategy, we spoke with Senior Marketing Manager, Chevrolet SUVs, Bradford Franz. Here’s what he had to say.

In an interview with GM Authority, Franz said that Chevrolet sees the subcompact crossover segment as splitting into two distinct channels. The first is a lower price segment with a price point of about $18,000, which is the space where the Chevy Trax resides. The second channel is a higher, more premium ATP space around the $23,000 price point, which is where the new Chevy Trailblazer resides.

As such, Chevrolet is essentially playing into both segments, while key rivals from Ford, Toyota, and Honda play in just one of the two segments. 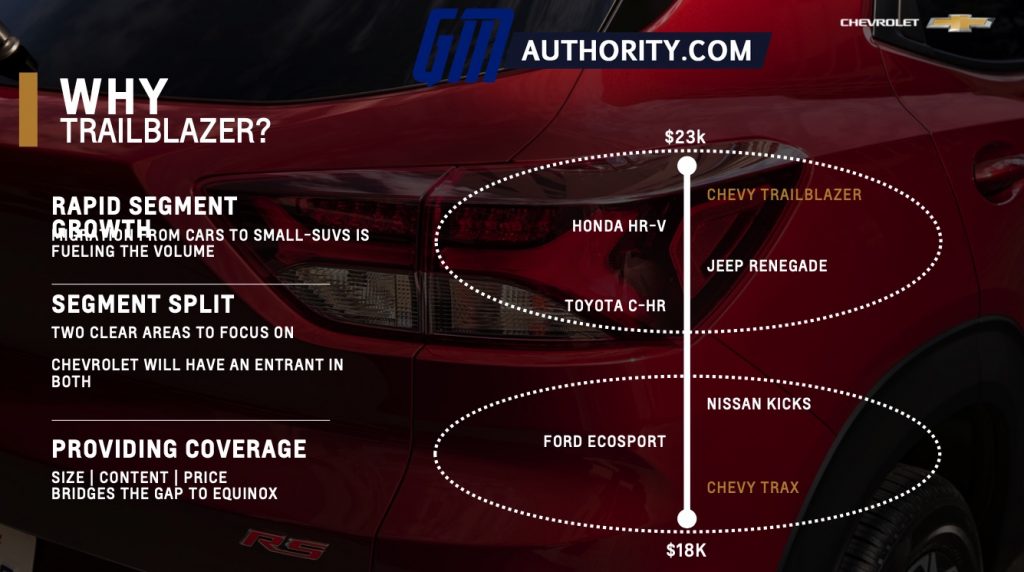 As we’ve seen thus far, the strategy is working for General Motors. Per recent General Motors sales numbers, Chevy Trax sales have been dominant in the U.S., rising 9.36 percent in the first six months of 2020 compared to 2019, with 50,708 units sold total compared to the 46,370 units sold in 2019.

It’s impressive stuff, and as the 2021 Chevy Trailblazer starts to hit its stride, those figures are sure to rise even higher.