A Florida man is catching heat online after he uploaded a video to YouTube showing him shooting out of the windshield of his GMC Sierra while driving on the highway. 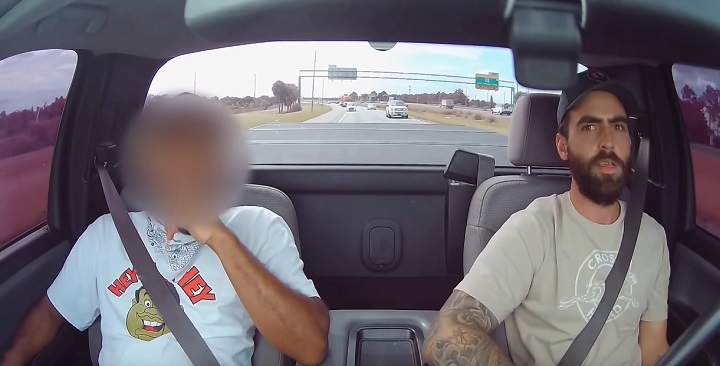 According to TMZ, Marco Mazzetta uploaded the dashcam footage to his own personal YouTube channel Endless Open Road. The video shows a Nissan 370Z sports car approach the rear of Mazzetta’s GMC Sierra as he drives on a wide two-way road. Mazzetta then cuts the Nissan off as the driver attempts to overtake his truck on the right-hand side before they both make a right hand turn onto a highway on-ramp. Mazzetta then cuts the Nissan driver off once again as they attempt to merge onto the highway, at which point he begins swearing and acting agitated.

When the Nissan 370Z speeds up and gets around Mazzetta, the driver can be seen rolling down their window. Mazetta claims the driver pointed a pistol at him at this time, prompting him to pull out his pistol in response. As his passenger cautions for him to calm down, Mazzetta holds the gun up with both hands, removing his hands from the steering wheel at nearly 100 mph, and begins shooting out the windshield toward the 370Z with his eyes closed. He claims he was defending himself and feared for his life, although it seems that would be a hard sell legally speaking, considering the Nissan appeared to be driving away from his vehicle.

The orange County Sheriff’s Office is currently investigating this dangerous incident, although no one has been arrested in connection with it, according to TMZ. The original video as uploaded by Mazzetta is embedded below, though we should warn readers that it contains some choice language in addition to the rather questionable firearm usage and poor driving standards.