With the ability to complete the quarter-mile in 11.3 seconds at 121 mph right from the factory, a lot of C8 Corvette Stingray owners may be tempted to take their new sports cars directly to the drag strip so they can really open up the taps. 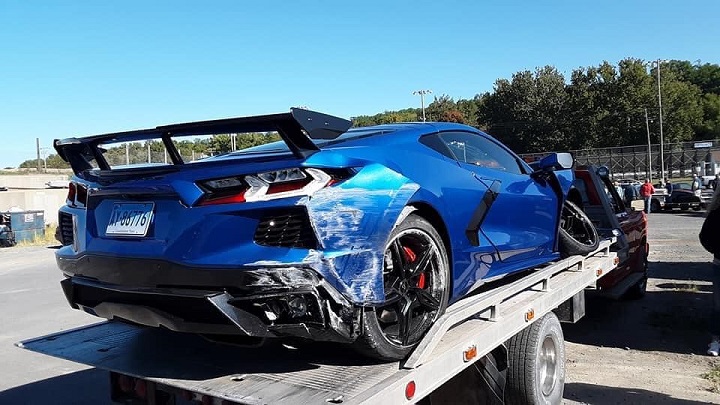 While we do suggest C8 Corvette Stingray owners stretch the car’s legs on a closed track rather than a public roadway, drivers still have to exercise caution when at the dragstrip and remember to drive within their abilities.

A C8 Corvette owner learned that lesson the hard way after they crashed heavily while racing at Lebanon Valley Speedway in New York recently. The driver in question lined their Elkhart Lake Blue Metallic Corvette C8 up alongside an Audi SQ5 crossover for a heads-up drag race, likely expecting an easy victory. The driver of the Audi times their launch well, however, and gets the jump on the more athletic C8 Corvette to the 60-foot timer. The C8 Corvette driver stays in the gas hard and begins to claw the Audi back when the sports car suddenly snaps to the right and hits the concrete barrier lining the side of the track nose-first.

It’s possible the driver of the Corvette felt the car start to lose traction and decided to stay in the gas out of fear that they were about to get walked by a crossover. At the same time, though, this appeared to be a fairly sudden loss of traction, so maybe they did all they could to save it. Photos showing the aftermath of the crash essentially confirm that this C8 Corvette will be a write-off, as the heavy impact appears to have bent the entire front end upward and set off all the airbags. Let’s just hope the driver was able to emerge from the crash unhurt.

The nature of this front end impact reminds us of the crash that Mark Reuss had in a C7 Corvette ZR1 while leading the IndyCar field to green in Detroit a couple of years back – although we’re sure the C8 Corvette driver was happy their embarrassing accident wasn’t televised nationally.

Check out the crash in the video embedded below.