The latest mid-engined C8 Corvette is facing off against all manner of sports cars and performance models lately, but this latest drag race is a bit of a surprise. That’s because the folks over at Hennessey Performance Engineering are placing a mildly modified next-gen Corvette side-by-side with… a Rolls-Royce Wraith?

On paper, these two coupes couldn’t be more different. While both have two doors and send power to the rear wheels, the C8 Corvette is a speed-focused track slayer, while the Rolls-Royce is a top-shelf luxury cruiser.

But don’t get it twisted – just because the Roller is designed primarily for backside coddling and strutting around Beverly Hills doesn’t mean it doesn’t have some serious giddy-up. Motivation is sourced from a twin-turbo 6.6 V12, which produces 624 horsepower and 605 pound-feet of torque, all of which is directed rearwards by way of an eight-speed automatic transmission. Compare that to the C8 Corvette’s naturally aspirated 6.2L V8 LT2, which produces 495 horsepower and 470 pound-feet of torque when equipped with the optional Z51 Performance Package exhaust system. 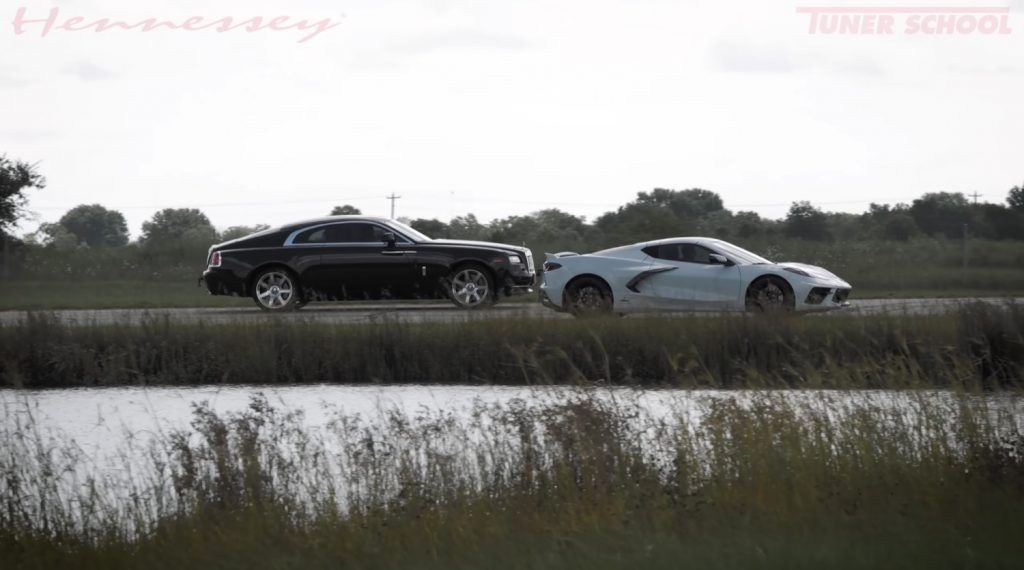 That said, the Wraith is also quite heavy, tipping the scales at 5,380 pounds, as compared to the Corvette’s 3,647 pounds. Add in the Corvette’s traction-generating mid-engine layout, and the Chevy definitely has more than a few tricks up its sleeves.

So then – the Rolls has the power advantage, but the Vette has the weight advantage. Which will come out on top?

To find out, Hennessey Performance runs a few tests, placing both vehicles side-by-side down the drag strip. Granted, this race doesn’t make a whole lot of sense, given just how different these two cars are. After all, no one is cross-shopping a Wraith with a C8 Corvette. Nevertheless, it’s fun to see what happens, so go place your bets in the comments and hit play.