The Cadillac CTS-V Sport Wagon is capable of hitting 190 mph right from the factory – which would be fast for a sports car or supercar, let alone a family-hauling, grocery-getting station wagon.

YouTube’s 1320 Video recently stumbled across a Cadillac CTS-V Sport Wagon that manages to make the extremely fast stock model look slow, however. A stock CTS-V would take quite a long distance to hit its 190-mph projected top speed, but with a massive turbocharger and some other modifications, this custom-built drag wagon gets the job done in less than half a mile.

The owner of this car says they used to run it with both the stock supercharger installed on the 6.2L LSA V8 engine and with a large rear-mounted turbocharger providing even more boost. That setup peaked out at about 1,200 horsepower after the supercharger hit its limit, so he had a shop pull off the supercharger, install a more aggressive camshaft and bolt on a larger billet intake manifold. The shop’s dyno peaked out at 1,500 horsepower, the owner says, which his car hit fairly easily. He doesn’t know how much peak horsepower it’s making, but 1,750 to 1,800 horsepower is a realistic ballpark. 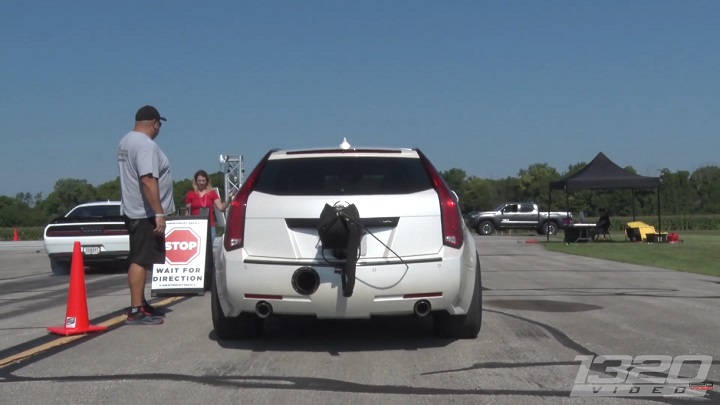 All this power is being sent through the factory Tremec six-speed manual transmission to a pair of massive rear drag radials. Despite the meaty set of rear rubber, this Cadillac CTS-V still manages to slip the tires at speed, making it difficult for the owner to hit his goal of reaching 200 mph in the half-mile. He eventually manages to put the power down perfectly, though, and squeezes out a trap speed of 200.26 mph. It may not be the fastest half-mile car we’ve ever seen, but for a street-legal Cadillac station wagon with Bluetooth, air conditioning and back seats, we’re very impressed.

Check it out in the video embedded below.