The great thing about Photoshop is that it can be used to help render over-the-top vehicles that would be extremely difficult, if not impossible, to actually build in real life. Rendering artist Rostislav Prokop recently used his graphic editing talents to do exactly this, with the Czech-based designer firing up his computer to produce a striking mid-engine muscle car based on the 1970 Pontiac Firebird. 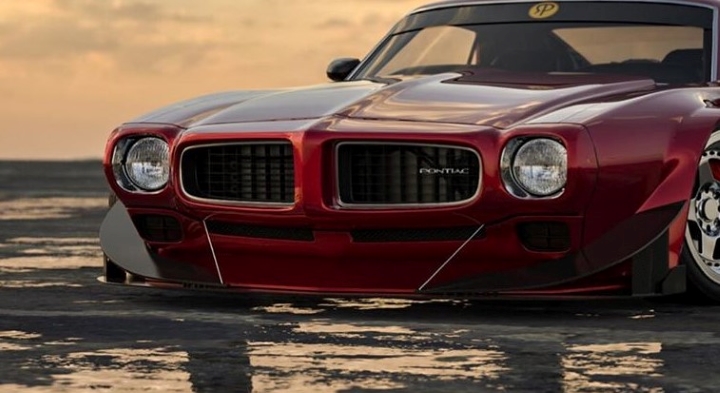 Prokop says he envisions this as being a mid-engine car, surprisingly, which explains the extra-wide rear track and huge rear side intake vents. Relatively small three-piece five-spoke wheels fill out the ultra-wide front and rear fenders and hide a set of slotted brake rotors with red-painted calipers. Completing this fictitious build is a coat of shiny candy red paint.

It wouldn’t be impossible to convert a muscle car like a 1970 Pontiac Firebird into a mid-engine vehicle – though it wouldn’t have much in common with the original car once all the custom work was finished. It would also be a rather expensive and complicated endeavor and likely wouldn’t result in a car with handling akin to modern-day mid-engine supercars like the C8 Corvette. This rendering is best left on our computer screens, it would seem, but at least it’s nice to look at.