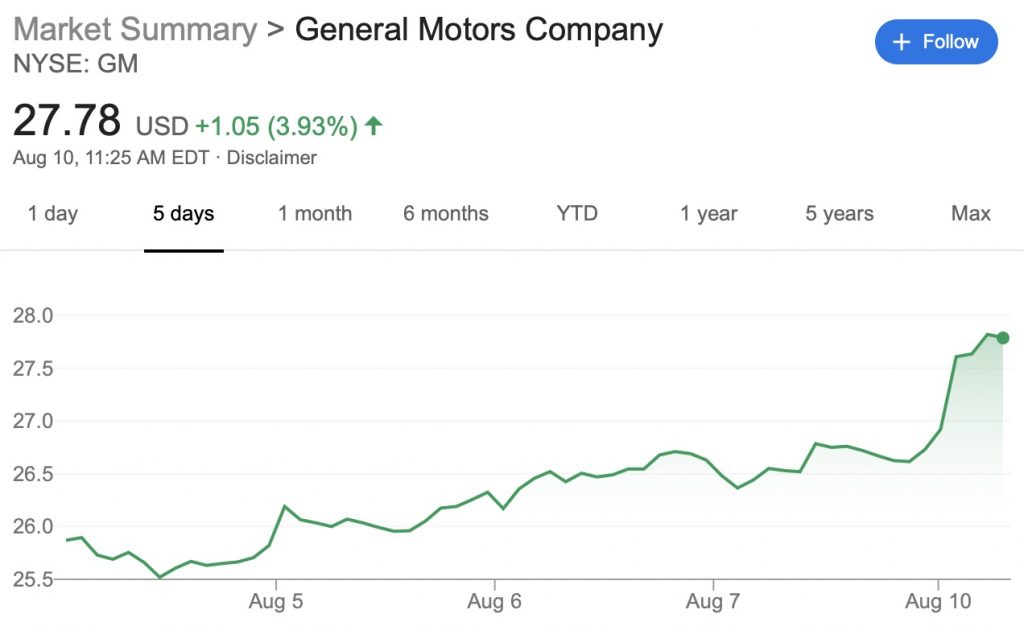 By comparison, shares of GM’s cross-town rival, the Ford Motor Company, grew $0.25 per share, or just under 4 percent, during the same timeframe. It’s worth highlighting the fact that The Blue Oval’s shares have experienced five weeks of growth out of the past six weeks. News surrounding the all-new 2021 Ford Bronco is believed to have influenced the automaker’s stock performance in the previous few weeks, as reservations of the First Edition model sold out in mere hours.

Notably, The General released its Q2 2020 earnings report last week, which showed a loss of $800 million on $16.8 billion revenue dollars. While the results aren’t great, they could have been much worse due to setbacks caused by COVID-19 complications. In fact, forecasts estimated a loss of as much as $2.6 billion. Relative to the multi-billion-dollar loss, the $800 million dollar setback doesn’t seem as detrimental. Moreover, CEO Marry Barra has stated that the global crisis won’t interfere with the company’s plans to revamp infrastructures in preparation of upcoming battery-powered products, and that she expects full economic recovery by early 2021. Other positive indicators include a premature ending to GM employee salary deferrals.

This week’s stock performance marks the first week of growth after two consecutive weeks of decline in GM stock value. The jump in value came after a five percent loss in value, a stable decrease, an 8 percent jump, which itself was preceded by a 3 percent decline, and a 3 percent increase before that. This overall ebb-and-flow pattern is rather apparent, and is reflective of the recent volatility in the marketplace as a result of complications caused by the COVID-19 pandemic. That said, GM stock has seen a net-positive performance since hitting a low of $16.80 on March 18th.

Currently, it seems some investors are banking on the profitability of GM’s plan to roll out an electrified portfolio, which includes an electric van, a Chevrolet EV pickup truck, the GMC Hummer EV – which was revealed in a teaser video – as well as the Cadillac Lyriq, which is set to debut August 6th.

The General is also dealing with the impact of its racketeering lawsuit against FCA having been dismissed by a judge, on top of coping with a small number of coronavirus cases at some of its facilities, including 22 confirmed cases at the Arlington Plant in Texas. Despite a high rate of worker absenteeism, GM has decided to keep the third shift at the Wentzville Assembly plant by relocating employees, after previously announcing that it would be cut. Meanwhile, workers at the GM Silao plant in Mexico have complained that the company is allegedly covering up a virus outbreak.