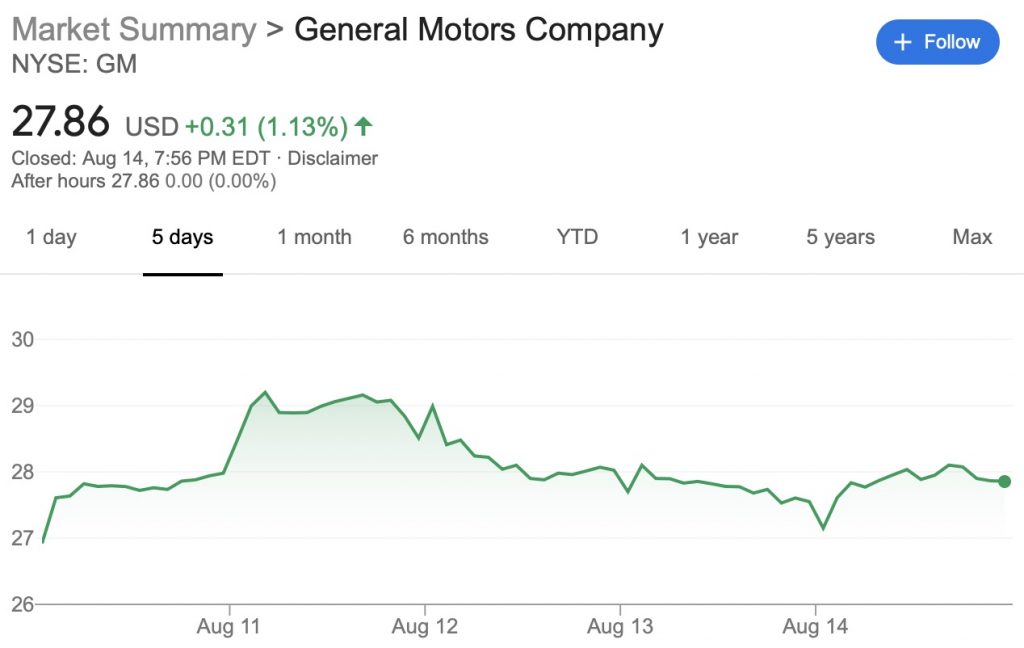 By comparison, shares of GM’s cross-town rival, the Ford Motor Company, grew $0.18 per share, or just under 3 percent, during the same timeframe. It’s worth highlighting the fact that The Blue Oval’s shares have experienced six weeks of growth out of the past seven weeks. News surrounding the all-new 2021 Ford Bronco is believed to have influenced the automaker’s stock performance in the previous few weeks, as reservations of the First Edition model sold out in mere hours.

Notably, The General released its Q2 2020 earnings report two weeks ago, which showed a loss of $800 million on $16.8 billion revenue dollars. While the results aren’t great, they could have been much worse due to setbacks caused by COVID-19 complications. In fact, forecasts estimated a loss of as much as $2.6 billion. Relative to the multi-billion-dollar loss, the $800 million dollar setback doesn’t seem as detrimental. Moreover, CEO Marry Barra has stated that the global crisis won’t interfere with the company’s plans to revamp infrastructures in preparation of upcoming battery-powered products, and that she expects full economic recovery by early 2021. Other positive indicators include a premature ending to GM employee salary deferrals.

Investors should also note some more recent news, including GM’s employee buyout plans to reduce its workforce in Brazil, U.S. District Judge Paul Borman’s ruling against the reinstatement of GM’s lawsuit against Fiat Chrysler Automobiles, and a new class-action lawsuit filed in Tennessee due to the “shift to park” issue that is commonly experienced by second-generation GMC Acadia owners. Also big news last week, GM CFO Dhivya Suryadevara handed in her resignation to join a financial startup company called Stripe.

This week’s stock performance marks the second week of growth after two consecutive weeks of decline in GM stock value. This apparent ebb-and-flow pattern has been the norm, and is reflective of the recent volatility in the marketplace, which is a result of complications caused by the COVID-19 pandemic. That said, GM stock has seen a net-positive performance since hitting a low of $16.80 on March 18th.

The General also recently had to cope with a small number of coronavirus cases at some of its facilities, including 22 confirmed cases at the Arlington Plant in Texas. Despite a high rate of worker absenteeism, GM has decided to keep the third shift at the Wentzville Assembly plant by relocating employees, after previously announcing that it would be cut. Meanwhile, workers at the GM Silao plant in Mexico have complained that the company is allegedly covering up a virus outbreak.