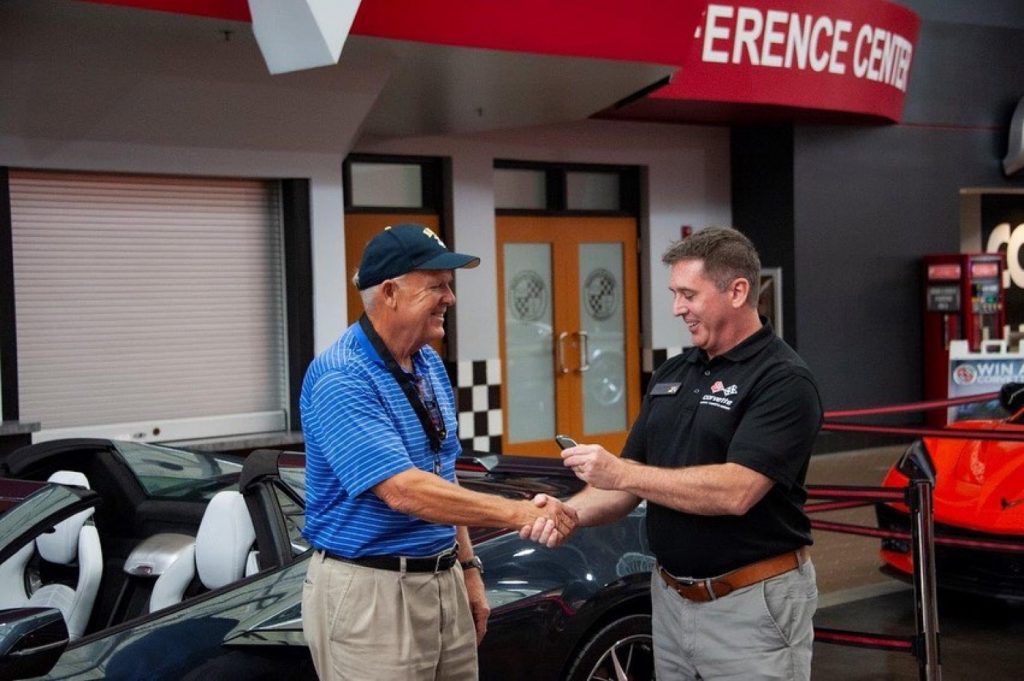 Per an official post from the National Corvette Museum, this was Akerson’s first visit to Bowling Green, which is home to not only the NCM, but also GM’s Bowling Green Assembly facility, the exclusive producer of the 2020 Corvette. The Bowling Green facility has exclusively produced the Chevrolet Corvette since 1981.

Akerson previously owned a 1958 Corvette, which he donated as part of a fundraising effort for Habitat for Humanity. The ’58 was subsequently auctioned for $270,000 at a Barrett-Jackson event, purchased by Corvette Hall of Fame inductee Rick Hendrick, who now has it on display at his personal museum.

As we covered previously, the National Corvette museum recently announced it would raffle off the 1,750,000th Chevrolet Corvette built as part of its own fundraising efforts. That particular vehicle, a 2020 Corvette Coupe with Arctic White paint and Adrenaline Red interior, comes equipped with the Z51 Performance Package, 3LT equipment group, and 5-trident spoke machined-face sterling silver aluminum wheels. Tickets for the 1,750,000th Corvette raffle are now sold out, but tickets for the NCM’s other upcoming raffles, including those for both 2020 Corvette models and 2021 Corvette models, are still available.

We certainly hope Akerson enjoys his new 2020 Corvette. It’s a fine-looking ride, and should provide him with many miles – and just as many smiles.

On Wednesday our team had the privilege of delivering a 2020 Shadow Gray Stingray to former Chairman and CEO of @generalmotors, Dan Akerson. As you can see from the smile on his face, Dan was excited to pick up his new @corvette. This was his first visit to Bowling Green, but not his first Corvette. He shared with us that he previously owned a 1958, which he donated for a fundraising auction benefiting @habitatforhumanity. That car was purchased for $270,000 at @barrett_jackson by Corvette Hall of Fame inductee Rick Hendrick, who has it on display at his private museum. Thank you to Dan and Debbie for sharing your special day with us, and enjoy the ride! #corvette #carsofinstagram #gm #generalmotors #chevrolet