Mason Whitlow, a tech support specialist at Holley Performance, grew up watching the Fast and Furious movie series. He credits Fast and Furious with fostering his love for cars early in his life and also turning him onto the Honda S2000 – a car that he eventually purchased for himself once he got older.

One day, Whitlow decided to line his little sports car up alongside his friend’s Dodge Neon SRT4 for a race. When the turbocharged Neon left him in its rearview mirror, he and his friend decided to turbocharge the F20C four-cylinder that comes in the Honda S2000. Mason eventually wanted even more power, though, so he decided to pull out the Honda engine entirely and drop a tried and true General Motors V8 in its place. 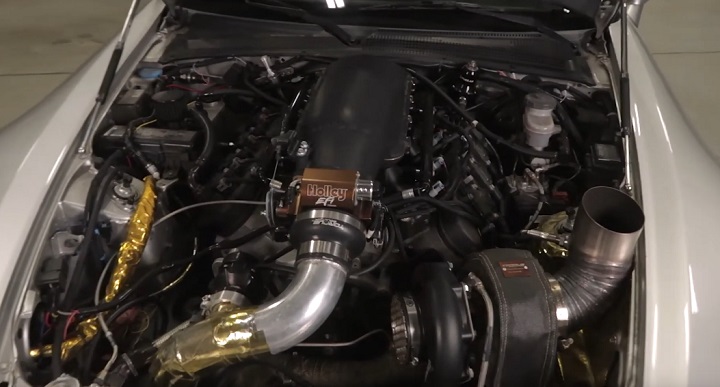 Whitlow’s Honda S2000 now has a 6.2L L92 iron block V8 under the hood, which is topped off with a Holley Dominator EFI system, 105mm Holley throttle body, a Holley Frostbite radiator and, crucially, a Boostlab turbocharger. It previously made just shy of 600 horsepower on pump gas, but after converting it to E85, it now makes 707 horsepower and 691 pound-feet of torque at the wheels. That’s on just 10 pounds of boost, too. With a little more boost, this little Honda could probably produce quite a bit more power than it already is.

This car was clearly built for the quarter-mile. Whitlow says the car ran a ten second pass the last time he was at the track, but with some more tuning still to be done, we’re sure he dreams of one day reaching the coveted nine-second range.

While Honda S2000 fans will hate to see this car trade its F20C for an L92, it’s hard to blame Whitlow for wanting to capitalize on his knowledge of Holley’s massive catalog of LS performance products. Hear what he has to say about his Honda S2000 in the video embedded below.