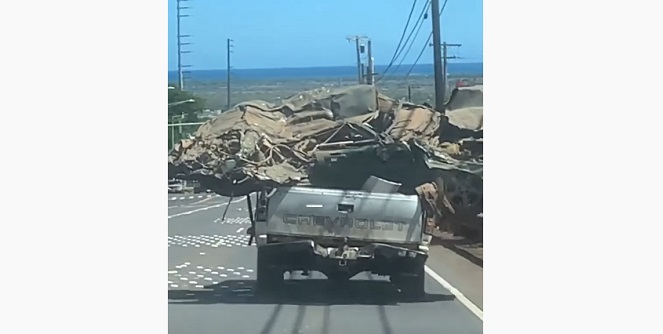 The Chevrolet Silverado is a very common fleet vehicle that can be seen towing wrecked vehicles away from crash sites as well as to and from junkyards all over the country each and every day. However, most of these trucks will be converted Silverado HD tow trucks or flatbed chassis cab trucks, not the every day man’s light-duty Silverado 1500.

A Hawaii resident recently attempted to haul a wrecked car with their regular old Chevrolet Silverado 1500 and it’s safe to say that safety wasn’t a priority here. A Silverado 1500 could technically be used to carry a small vehicle on a trailer, but this person, who was caught on video as they drove down the street with the truck sitting in the pickup’s bed, doesn’t seem too concerned about acting responsibly. 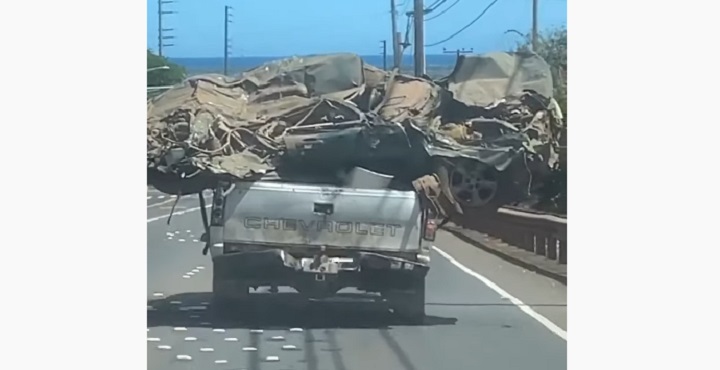 That’s right – rather than hitch a trailer up to their pickup, this genius decided to just toss the wrecked vehicle in the bed. The car wouldn’t fit in the bed lengthwise, either, so our intrepid driver decided to just lay it across the bed transversely. As such, the wrecked vehicle is hanging off both sides of the pickup by about three or four feet, likely obstructing the oncoming lane on narrower roads.

To be honest, we’re rather proud of the performance the Chevrolet Silverado is putting on here. This old Chevy hauls the wrecked car down the road with ease and the suspension isn’t completely collapsing under the weight of the car, either. It does look a bit lopsided on the left, however.

At one point in the video, the filmer asks if this is a legal way to haul a car. We imagine this would be enough for a police officer to pull them over and give them a ticket for some type of infraction related to improper cargo securement and if it fell off, well, then they’d be in even bigger trouble. According to a 2017 report published by the Hawaii Department of Transportation, HDOT crews respond to an average of 5,000 callouts a year for potentially hazardous debris on state roads on the island of Oahu alone.

Check out the video embedded below. It goes without saying that one should probably not try this at home.