With mid-engine proportions and sharp styling, there’s no doubt that the C8 Corvette is a gorgeous-looking machine. However, it doesn’t take much to up the ante even further, as evidenced by the 2020 Chevrolet Corvette featured here riding on a set of Vossen HF-5 wheels.

The C8 Corvette is shown off in a brief video, clocking in at just over one minute, 30 seconds in length. The video is nicely put together, and doesn’t include any narration or dialogue. Rather, it gives us a look at the eighth-gen Vette’s lines through a series of tasty edits that place the sports car on a rain-soaked street, silently gliding around on the plus-sized rollers. An atmospheric, beat-laced soundtrack plays in the background, giving the video a chilled-out vibe that’s spot on for a drizzly day.

The wheels in question are part of Vossen’s Hybrid Forged wheel line, and present in a black finish with a split five-spoke design. The pocketed spokes get a wide Y-pattern look, and are sized at 20 inches by 9 inches in front, and 21 inches by 12 inches in the rear. Vossen says it also offers the HF-5 in sizing up to 22 inches in diameter, with two standard finishes and nine custom finishes on offer.

Interestingly, the wheel design is vaguely similar to the optional five-trident-spoke wheel design offered from the factory, which lends the car a hint of OEM. However, the sizing and stance confirms that this machine was indeed modified.

The car in question is a C8 Corvette Coupe draped in Sebring Orange Tintcoat paint. The two-door is equipped with the Z51 Performance Package and comes with a High Wing Spoiler finished in black. The roof and A-pillars are also done in black, as are the sideview mirrors, all of which combine to offset the bright orange paint nicely. 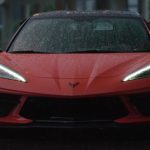 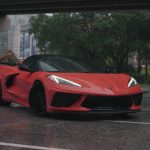 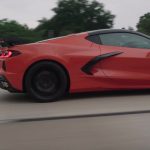 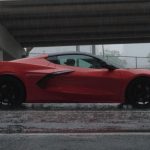 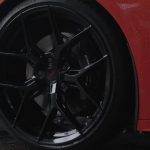 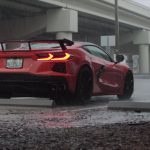