The ninth-generation Chevrolet Impala was the last Impala offered as a police cruiser. The Chevrolet Impala PPV, as the police-prepped version of the mid-size sedan was called, featured a 302 horsepower 3.6L V6, additional oil, transmission and power steering coolers, a 170-amp alternator, 100-amp auxiliary power supply unit and seventeen-inch steel wheels with high-speed certified Goodyear tires. It was later replaced by the Chevrolet Caprice PPV, which has also since gone out of production, but can still be seen in service with some departments around the country.

Not all ninth-generation Chevrolet Impalas found themselves on the right side of the law, however. YouTube channel ‘Boost and Redline’ recently uploaded a video showing a ninth-generation Impala driver leading police on a high-speed chase near San Bernadino Airport just outside of Los Angeles. With a Dodge Charger and Ford Explorer police vehicles giving chase, the male suspect in the Impala is seen swerving through traffic, running red lights and cutting through parking lots as they attempt to get close enough to pit maneuver the vehicle. 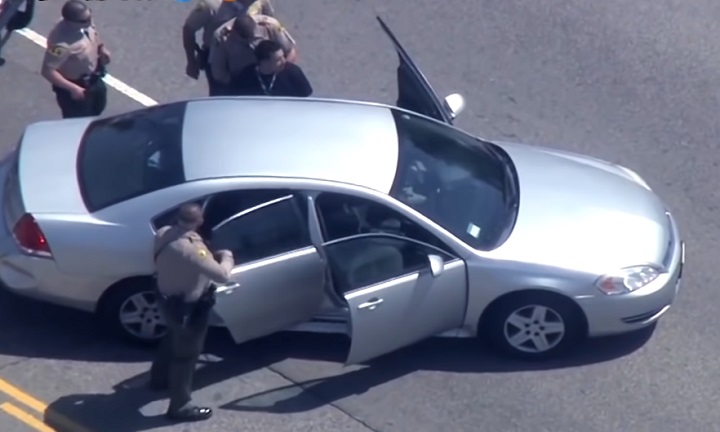 After avoiding the police’s attempts to spin them out, the suspect eventually stops the vehicle in the middle of the street and surrenders to police without further incident. This is a positive and somewhat surprising end to this chase, as so often high-speed pursuits like these don’t end until the suspect crashes or their vehicle breaks down – and even then they usually attempt to continue the pursuit on foot. Then again, it’d be next to impossible to successfully escape from the police while in the endless suburban sprawl that is the LA metropolitan area, though, so the suspect likely realized this before deciding to give up.

Check out this pursuit in the video embedded below.