J.D. Power has published the results from its 2020 Automotive Performance, Execution and Layout (APEAL) study, with GMC ranking third among mass-market brands to finish ahead of both Chevrolet and Buick.

The APEAL study attempts to gauge new vehicle owners’ “emotional attachment and level of excitement with their new vehicle across 37 attributes, ranging from the sense of comfort and luxury they feel when climbing into the driver’s seat to the feeling they get when they step on the accelerator,” according to J.D. Power. The study, which is based on over 87,000 responses from owners of new vehicles, is intended to complement the J.D. Power Initial Quality Study, recognizing vehicles that create joy for their owners that help outweigh negatives caused by reliability problems they experience. 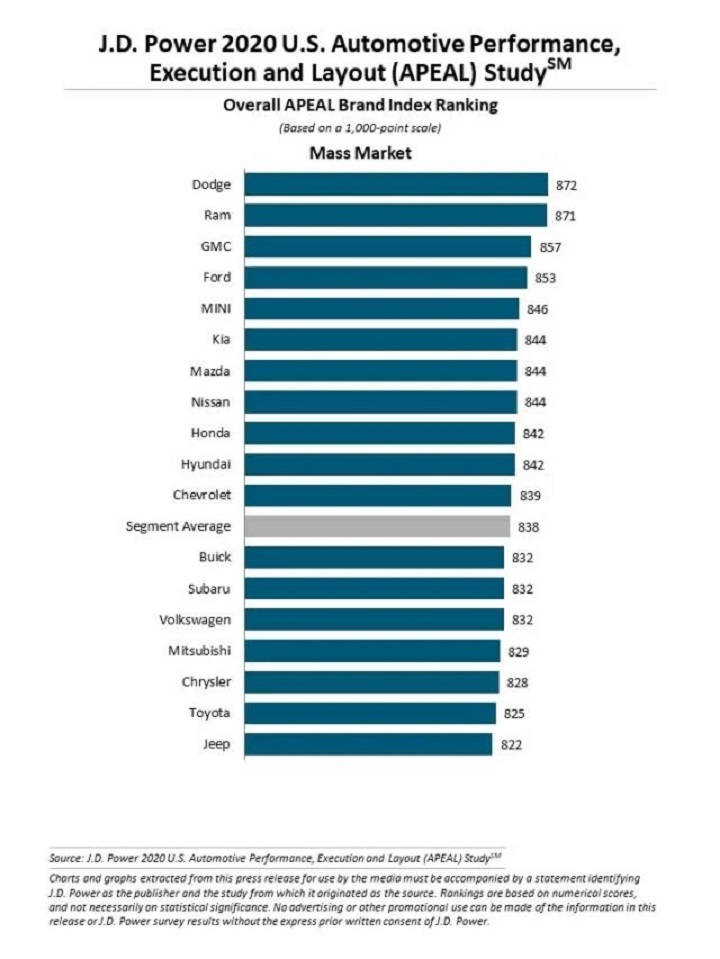 J.D. Power uses survey responses to give brands a score based on a 1,000 point scale. First among mass-market brands was Dodge with a score of 872, while Ram was second with a score 871. GMC’s score of 857 was enough to earn it third, placing it ahead of rival Ford and the BMW-owned Mini brand. J.D. Power also hands out model-level awards for the APEAL study, with the GMC Sierra HD taking home the only model award for the GMC brand this year. Other General Motors vehicles to receive model-level awards include the Chevrolet Blazer and now discontinued Cadillac CT6.

“The APEAL Study measures an owner’s emotional attachment to their new vehicle and in what areas that vehicle may not be delivering on all of the positive experiences that were hoped for,” J.D. Power said in a statement. “Understanding this is just as valuable to automakers as knowing about quality issues and owner acceptance of new technologies. The goal for automakers is to delight customers on all these dimensions. Some are better than others at doing this.”

Unfortunately, not all GM brands were as good at generating emotional attachment and exciting among buyers. Chevrolet had a score of 839, placing just barely above the average score of 838. Buick was below average at 832. FCA experienced a similar trend, with Dodge and Ram topping the study and Chrysler and Jeep finishing second last and last, respectively.