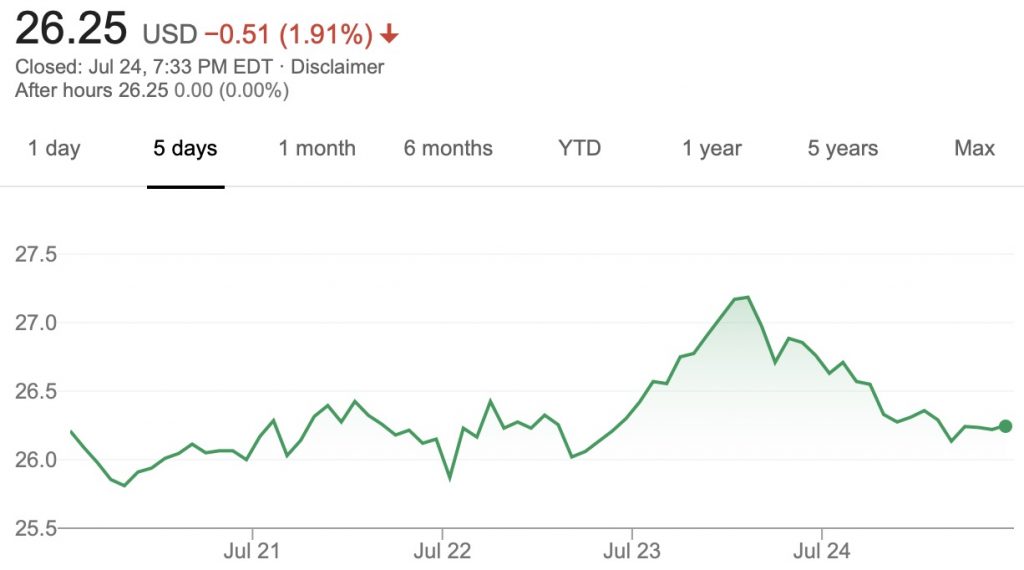 By comparison, shares of GM’s cross-town rival, the Ford Motor Company, grew $0.08 per share, or just over 1 percent, during the same timeframe. While the growth was minimal, it’s worth highlighting the fact that The Blue Oval’s shares have experienced four consecutive weeks of growth. News surrounding the all-new 2021 Ford Bronco is believed to have influenced the automaker’s stock performance last week, as reservations of the First Edition model sold out in mere hours.

Notably, The General is expected to release the Q2 2020 earnings report this upcoming week on July 29th, and the results will surely have an impact on GM share values.

This week’s minor decline in GM stock value comes after last week’s 8 percent jump, which itself was preceded by a 3 percent decline, and a 3 percent increase before that. This overall ebb-and-flow pattern is rather apparent, and is reflective of the recent volatility in the marketplace as a result of complications caused by the COVID-19 pandemic. That said, GM stock has seen a net-positive performance since hitting a low of $16.80 on March 18th.

Most recently, Wall Street analysts have rated GM as a buy, with Morgan Stanley’s Adam Jonas projecting a $100 billion market cap in GM’s future, which currently sits at nearly $40 billion, or less than half of the projected amount. It seems some investors are banking on the profitability of GM’s plan to roll out an electrified portfolio, which includes an electric van, a Chevrolet EV pickup truck, the GMC Hummer EV as well as the Cadillac Lyriq, which is set to debut August 6th.

The General is also dealing with the impact of its racketeering lawsuit against FCA having been dismissed by a judge, on top of coping with a small number of coronavirus cases at some of its facilities, including 22 confirmed cases at the Arlington Plant in Texas.

In addition, cases of employees that have tested positive for COVID-19 have been confirmed in GM’s Wentzville assembly plant, and the third shift was cut last week due to employee absenteeism. Meanwhile, workers at the GM Silao plant in Mexico have complained that the company is allegedly covering up a virus outbreak.

That said, there are still some good things happening for GM in 2020, including a 27 percent growth in Silverado sales during Q1 2020, market share gains for the Silverado and the Sierra during Q2 2020, and strong Chevrolet Blazer sales. The retooling of the GM Arlington assembly plant in Texas has been completed, and production of the company’s redesigned line of full-size SUVs is now under way, as Chevrolet Tahoe and GMC Yukon units have arrived in dealerships. Meanwhile, assembly of the Chevrolet Suburban and of the GMC Yukon XL has started.