Prior to the introduction of the seventh-generation Chevrolet Corvette for the 2014 model year, the rear end of Chevy’s iconic sports car was characterized primarily by a quad set of rounded tail lamps, with dual lamps per corner. Interestingly, this characteristic look naturally lends itself to certain livery designs, particularly for an enterprising subset of owners who want to pay homage to the classic kids cartoon, SpongeBob SquarePants. As it just so happens, some folks have gone so far as to actually apply images of the cartoon characters to the rear end of their Corvette – you know, in real life. 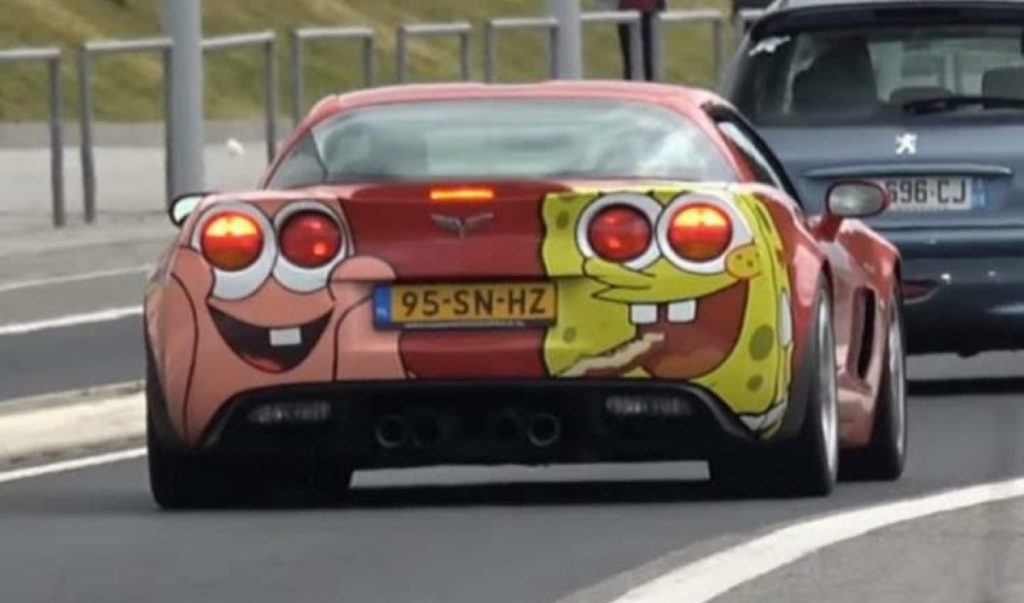 The exact origin of the Chevrolet Corvette SpongeBob meme is unclear, but if you know the history behind it, feel free to post about it in the comments. However, it would appear as though the meme started with a custom livery in a racing video game. Screenshots of the livery were then shared to social media, and given the meme-friendly nature of the SpongeBob SquarePants cartoon, fans ran with it from there.

Now, real Chevrolet Corvettes with real SpongeBob liveries are showing up in the real world, much to the delight of onlookers.

Of course, having a pair of cartoon characters plastered to the rear end of a sports car isn’t for everyone. That said, this kind of things plays well to fans of Internet culture and social media, and gives the Vette a lighthearted look that’s a clear break from the traditional oh-so-serious-speed-demon vibes.

Note that the video embedded below incorrectly tags the Vette in question as a C7, when it is in fact a C6 model.

But it makes us wonder – perhaps this kind of thing could be used as a sort of “psychological warfare” against rival drivers at a track day? Just imagine getting passed by a Chevrolet Corvette with a giant cartoon sticker on the rear end that replaces the characters’ eyes with glowing tail lamps. Talk about getting thrown off your rhythm, right?

What are your thoughts on this custom Chevrolet Corvette livery? Do you give it a pass, or is it simply too absurd? Let us know by voting in the poll below, and make sure to subscribe to GM Authority for more Chevrolet Corvette news, Chevrolet news, and around-the-clock GM news coverage.