Two suspects were taken into custody after they led Los Angeles police on a lengthy, high-speed chase this week in a stolen Chevrolet Silverado.

According to KTLA, the chase began in Pomona, California after police identified the stolen Chevrolet Silverado and attempted to pull it over. The male driver fled, leading police on a high-speed chase down Interstate 10 and entering the Los Angeles area. The pickup then circled south Los Angeles for roughly 30 minutes as the driver attempted to evade police, weaving in and out of traffic and pulling a number of evasive maneuvers in the stolen pickup.

Things got a bit scary when the suspect entered the 110 freeway. The driver led police down the highway before crossing several lanes of traffic and hitting a nearby car as they tried to enter an off-ramp. This late maneuver was unsuccessful, however, as the contact sent the truck spinning. The driver then proceeded to drive the wrong way down the highway before getting into a head-on collision with a Nissan Altima. The Silverado continued on after the crash, exiting the highway and dipping into a nearby neighborhood. 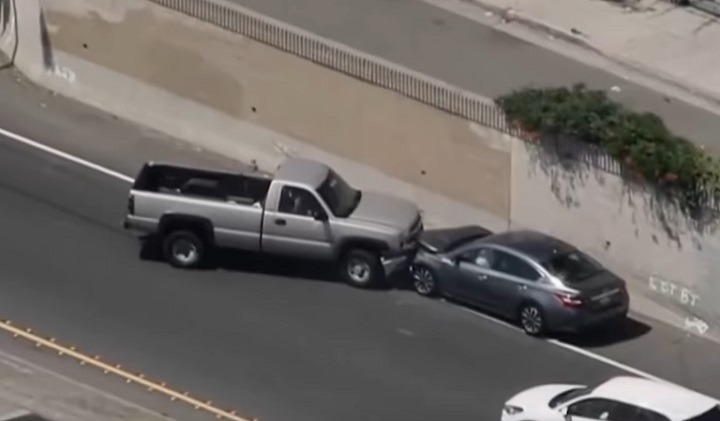 It is at this point that another driver, also in a Chevrolet Silverado, tried to box the stolen truck in, leaving the suspect to needlessly spin the vehicle’s tires as he tries to reverse while pinned against a parked box truck. The suspect managed to away from the civilian vigilante, but his tire failed shortly after, with the rim falling off the truck not long after that. The suspect and his female passenger then attempted to flee on foot, but were immediately apprehended by the LAPD. 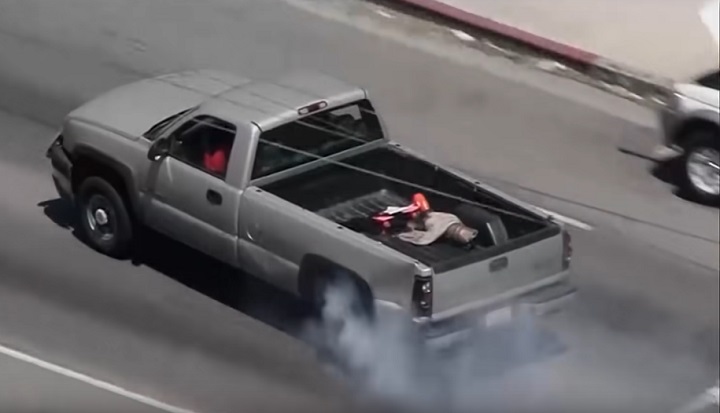 A video captured by a pursuing news helicopter revealed the truly absurd nature of the pursuit. At one point, an unknown pedestrian appears to pass an object to the passenger of the truck through the window and later on in the pursuit a pedestrian is seen throwing a can of orange paint at the windshield in an attempt to slow it down. The driver also pulls some impressive evasive maneuvers, including a Hollywood-style 180-degree handbrake turn to avoid a police spike strip.